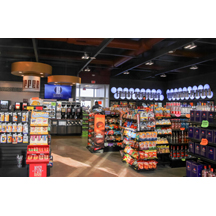 Good store design is more than just a pretty face. It can mean the difference between efficient and inefficient work flow, and whether customers see your products and perceive your brand in a positive light.

Alon Brands, the nation’s largest licensee of 7-Eleven stores, with 295 locations in west and central Texas and New Mexico, knows the value of a good store design. In fact, the company is in the midst of a chain-wide remodel program.

The remodel involves everything from new floor and ceiling tiles to wall coverings and graphics, to counters and gondolas. A coffee island also puts the spotlight on the stores’ hot beverage offerings.
Where there is sufficient room, the company is expanding the space dedicated to hot and cold foodservice. Ketchum also noted that a new 4,500-square-foot site that is being built in Rio Rancho, N.M., not only has room for expanded foodservice, but will also boast a barista-style espresso and smoothie offering, wine wall, beer cave and “a unique merchandise offer and design package.”
The company, Ketchum said, also has two or three new-builds in the pipeline.

Alon has converted most of its lighting under the gasoline canopies to LED. In addition, the company retrofitted its Albuquerque stores with LED lighting inside and is expanding the scope of the remodels to include LED lighting in the coolers. “It is not only cost efficient and impactful lighting, but it’s the right thing to do for the environment,” Ketchum said. “We are in discussions on an energy-management test that would monitor equipment remotely and regulate demand.”

Cleanliness Matters
As part of the remodels, the company is upgrading the restroom facilities, looking at all options, including low-water-usage fixtures and hands-free sinks, dryers and entryways. Keeping the restrooms clean is one of the highest priorities at Alon Brands.

“We fully understand that today’s consumer no longer gives you a pass when it comes to clean restrooms,” Ketchum said. “If we plan to remain competitive in the retail and, especially, the foodservice arena, we must maintain sparkling facilities.”

A rigorous third party inspection, called the Clean TEAM, grades stores on customer service attributes, including cleanliness. (“In 2014, the overall chain achieved a 95.2% rating,” he said.) To demonstrate its strong commitment to the effort, the company awards top store managers with new cars.

“It’s clear to our staff as well as to our guests that we are serious about clean,” Ketchum said.
Restroom cleanliness and sanitation are monitored on an hourly basis in the stores. Inspection checklists are posted so that both guests and employees can see them.

Driving Traffic
Last year, Don Schomaker worked with Cranford, N.J.-based Paragon Solutions to design a new 8,000-square-foot Eddie’s Travel Center in Mascoutah, Ill. Now open, the location boasts a Huddle House restaurant with a 92-person seating capacity that takes up half of the total square footage. It also has a 15-foot by 11-foot beer cave, a 15-foot by 12-foot deli with made-to-order and fresh, grab-and-go sandwiches and pizza, a drive-through and a moderately equipped game room.

“The game room is a popular place for people to stop,” Schomaker said. “During the day we see a lot of locals, mostly women, and later at night we see more truckers. I would say that it breaks down to 60% locals and 40% highway traffic.”

Schomaker has gotten many compliments on the store’s décor and color scheme, which are bold and bright with yellows and reds. Some parts of the center are decorated with brick, while others have striking arches.

One area sports a seven-foot flat screen television above the fountain, advertising specials that change every week or so. Two smaller flat screens serve as menu boards.

Schomaker pointed out that all lights in the store, parking lot and on the canopy are LED. In the bathrooms, sinks are completely touchless, with hands-free soap dispensers, water faucets and dryers.
Perhaps more importantly, restrooms are cleaned on an hourly basis, which customers seem to value above all else.

Regular Remodels
For the Bosselman Cos., parent of Pump & Pantry Convenience Stores, store upkeep is an ongoing process. Every year at least some of the stores will receive a facelift and/or other remodeling or refreshing. Bosselman Cos. operates 50 Pump & Pantry locations in Nebraska.

“In any given year, we will refresh stores that have undergone wear and tear or need to have their colors and/or facilities updated,” said Brian Fausch, the company’s chief operations officer. “Last year, we did six.”

While repainting, replacing woodwork and changing to LED lighting are usually part of the job, restrooms are the No. 1 priority. Bosselman has its own construction crew to do the remodels.

“We have made a strategic initiative to remodel every one of our 50 restrooms, changing everything from the grout and the tile to the lighting and fixtures,” Fausch said. “Remodeling all 50 restrooms is about a year-and-a-half project and we hope to be finished in the fall.”

Keeping the restrooms clean is part of the regular routine at all of the locations. A schedule is posted for each shift and district managers can stop in for impromptu inspections anytime.

“The competition is tough out there and, having been in the truck stop business for a number of years, we’ve always been known for the cleanliness of our bathrooms and showers,” Fausch said. “We know that a clean bathroom plays a big part in customer perception of our foodservice, every other aspect of the stores and our brand overall.”

Competitive Edge
As foodservice becomes an increasingly important part of the Pump & Pantry brand, another key strategic initiative for the stores is making room to accommodate the preparation and merchandising of fresh prepared foods. Among the new equipment that will be required are coolers, fryers and ovens.
“To remain competitive, we need to offer a wider variety of food items, especially for breakfast,” Fausch said.

The company calls this enhanced foodservice initiative “Generation 3” and expects it to launch later this year. Going forward, a few stores a year will receive the upgrade and new stores going forward will have the expanded foodservice.

Stores that have the space will be retrofitted with kitchens. Some others will have space added on to accommodate the enlarged foodservice presence. For example, the company is adding on 1,200 square feet of space to a Pump & Pantry store in Holdrege, Neb. to accommodate more foodservice, including a Little Caesars Pizza location.

For Bosselman, keeping up with store maintenance begins with the customer’s first encounter with the property—the parking lot. With Nebraska’s sometimes brutal winters, potholes are a constant concern, so the company is always patching and fixing them to keep the parking lots safe and attractive. In nine locations, the sidewalks or walkways were recently torn up and totally redone.

“You can’t overlook any part of the property either outside or inside,” Fausch said. “It’s all a part of the brand.”