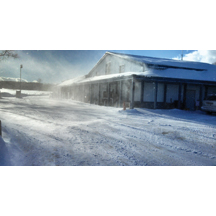 Generators can set your c-store apart when customers need food and fuel during disasters or bad weather.

Power outages and natural disasters can occur at any time, resulting in disrupted business, spoiled food and much worse. For many c-store owners, having a game plan to keep operations up and running should the unexpected occur has helped them turn an unfortunate situation into an opportunity.

Eric and Tony Huppert, the son and father owners of Team Oil TravelCenter in Spring Valley, Wis., know first hand how being prepared for the unexpected can benefit business and the bottom line. In 2007, when the company was putting on its first addition, they added a 400-horse- power 200-kilowatt diesel generator.

“My son wanted to build onto our location, and I said, ‘If we’re going to build on, put in a generator so I can sleep at night,’” said Tony Huppert. “If you’re going to supply a service to your community and your customers, you have to be able to run when they can’t run.” He said that while most c-stores have loyalty programs, what customers really need is for you to be there when things go bad and they really need something.

Case in point: two years ago, on May 2, the Spring Valley area received 18 inches of snow, and the entire area lost power. Thanks to its automatic generator, Team Oil Travel was the only place open. “We had 1,000 people visit our store that day, and we live in a town of 1,300,” Huppert said.

“I think we saved so many marriages that day,” he joked. “You’d see the woman come in and get a cup of coffee and a bag of doughnuts, and two hours later the guy would come and get coffee and other stuff, and then later in the afternoon the whole family would come and eat at Subway, so they were in and out of here all day long. In the dining room we have WiFi, so a lot of people who couldn’t get to work did all their work right here.” 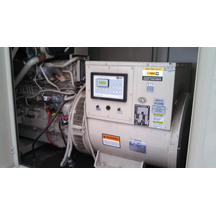 If Team Oil Travel Center loses power, its automatic generator powers up in six seconds, and is able to supply power to the entire travel center, including the gas pumps, food equipment and coolers. After Superstorm Sandy, Huppert noted, he was contacted by the state of Wisconsin, which advised that c-stores should at least offer a hookup that could run a towable generator, but Huppert prefers an automatic version.

“If you’re not going to run big enough to run everything, it doesn’t really serve a purpose because just running the pumps isn’t going to do anything,” Huppert said. “You have to be able to provide the service for everything customers expect.”

“We already sell diesel, so we figured we might as well have a diesel generator,” Huppert said. “That way we already have the fuel we need on hand; we’re self-contained.”

“We were shut off from city water for a day, but we were able to keep running even though we have a food place, because we have those 800 gallons of water in our line under pressure, so we just cut back on the car wash and any unnecessary things, Huppert said. In fact, the travel center can operate for two days without any city water and has a 6,000-gallon water tanker from the company’s creamery that can be attached to the travel center’s pressure pump.

In addition to its pressure tanks for water, and keeping the generator fueled up and maintained, Huppert ensures the gas tanks are full.

“We run our tanks on the top. I had a transport order one day that had a flat tire, and it was delayed six hours,” Huppert said. “If we’d been scheduling delivery just before we ran out, we’d have run out of gas. Some gas station owners would rather the fuel run out than pay too much for product. I just keep buying. You can buy high, buy low—it averages out in the end.”

SAFE HAVEN
The Team Oil Travel Center building is also reinforced with three roofs and walls 20 inches thick. It also features 120 cameras to monitor the nine acres. As such, the property is available as a safe haven for the local community.

So far, the Spring Valley area has been fortunate in avoiding such disasters. Since adding the generator in 2007, Team Oil has needed to use it several times, but mostly for minor power outages. In 1980, high winds from a tornado upended farm silos and took out power in the area for days. If such an event strikes again, Team Oil will be ready.

PREPARING FOR THE UNEXPECTED
Osborn’s Country Store in Duxbury, Mass., added a Kohler generator to its one-store operation one year ago. Mark MacFarlane, a manger at the store for the last 34 years, has seen many large power outages disrupt business.

“After the owner died and his wife took over the business—right around that time we had a major power outage that lasted about a week,” MacFarlane said. “I lost all my dairy products, all my ice cream, and I was sitting on 4,000 gallons of fuel I couldn’t pump.”

Osborn’s Country Store selected an automatic generator, powered by natural gas. “We already have natural gas here, so it made sense to use that,” he said.

“We were here during Superstorm Sandy, and we did lose power and product. But for us, the store never closes,” MacFarlane said. “In the past, we would have a little gas-powered generator that would only run a few lights and the cash register, but we’d lose our dairy products and anything perishable. I’d be bundled up in a jacket because we would lose heat.”

Having the automatic generator, he noted, is giving the store an opportunity to stay open for the community. “We have what they need, and the generator helps us stay open for them without losing anything perishable, which is a big expense,” MacFarlane said.

Since adding the generator a year ago, the store has been fortunate to not have experienced any major disasters that require it. “We’ve experienced one short power outage. We probably wouldn’t have lost any products in that one, but it was nice to see the generator kick on,” MacFarlane said.

PEACE OF MIND
Like, MacFarlane, the generator gives Team Oil’s Huppert reassurance that no matter what comes their way, the travel center will be available for its customers. “No. 1 is taking care of the customers, but I get peace of mind because of that,” Huppert said.

He noted that while it is expensive to invest in a generator, the payoff comes in the long run, as opposed to the short term. Being open in a time of need builds customer loyalty, and customers in turn remember that you were open for them the next time they want to buy gas or pick up a convenience item, Huppert explained.