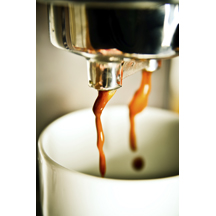 The rising cost of coffee and growing competition among convenience stores is spurring richer coffee programs across the board.

Due to Last Year’s droughts that hit Brazil, in addtion to a fungus that ravaged coffee bean fields in Central America for a good part of 2014, coffee prices rose about 50% last year.

That’s serious sticker shock for a category that many c-stores—and customers—begin their day with.

“Hot dispensed beverages are an important part of a c-store’s foodservice offer,” said Steven Montgomery, president of b2b Solutions LLC of Lake Forest, Ill. “NACS reported that for the average c-store hot dispensed beverages contributed slightly over 20% of total foodservice sales; almost 24% of its profits. More importantly, conventional wisdom states that if you own breakfast, you own the day.”

Combined with consumers’ growing fondness for more diverse flavors, coffee varieties, and single cup and espresso-coffee offerings, more c-stores are mixing innovation with the need for efficiency to bring a new experience to coffee customers.

“C-store coffee has come a long way from an offer that was comprised of a single spout over brewer, powered creamer and a sugar shaker,” Montgomery said. “Today’s offer starts with specialized brewing systems that in many cases also not only keep the coffee hot, but fresh.”

In addition, consumers can customize their coffee with a variety of creaming solutions and flavors on site, he added.

“The cost of coffee beans moves up and down on both harvest forecast and actual harvest results,” Montgomery said. “This volatility impacts what we and other coffee sellers pay for coffee.”

However, Montgomery added, when the price goes down few if any retailers roll back their prices. “They know that there will be times when the margins will be long and times when they will be tighter.”

“I think that for us, one of the big keys about consumers is that I don’t necessarily think that they are that price conscious,” said David Lloveras, vice president of retail operations for Sprint Foods Stores Inc., based in Augusta, Ga. “I think that the likes of Starbucks have set a much higher bar, so one of the things that I’ve been speaking with Andy (president and CEO Anderson Jones) about during my eight months here is the need for (excellence in) execution, freshness and different alternatives.”

Sprint offers customers a southern pecan blend of coffee. “We get it from our supplier, S&D Coffee, and it is something that none of our competition have. It allows us to get that competitive advantage for a person’s taste preference.”

Also, there are multiple ways that a convenience store can try and deal with the rising costs, Lloveras said. “What we do at Sprint foods is ensure that we are offering fresh coffee all the time, and trying to give the consumers’ palates a different alternative.”

“The whole problem is that a lot of convenience stores are using coffee as a loss leader anyway,” said Bob Phibbs, whose consulting firm, The Retail Doctor, based in Coxsackie, N.Y. “I’m in upstate New York, and putting out signs that read ‘Free Coffee’ or ‘One Price’ makes no difference. The margins on coffee are really high anyway, so honestly, if the price goes up a few pennies, it’s not really attacking their bottom lines that much.”

Perhaps, c-store operators need not try and compete with Starbucks, he explained.

“If you’re a serious coffee drinker you aren’t going there anyway,” Phibbs said. “I think they are separate customers. So you are really dealing with a tertiary market no matter how you look at it.”

At the same time, however, others are indeed going after the very same coffee drinker. “McDonald’s is going after coffee big, and Dunkin’ (Donuts) has even come in big in coffee.”

McDonald’s recently unveiled a new line of ground coffee to be sold in supermarkets and big box stores in an effort to expand the visibility of the premium roast sold at its fast-food restaurants. Manufactured by Kraft, it is selling in 12-ounce bags, and 12- and 18-count K-Cup style packs.

GETTING AGGRESSIVE
One way to attack the market is to target dayparts.

“It is well known that 90% of America drinks its coffee before 11 a.m., so having a sign out in front that says ‘Coffee All Day Long’ doesn’t really make it,” Phibbs said. “That said, capitalizing on impulse sales with curb signage, especially for drivers en route to the freeway, will add sales. “That would be of value. You could ask your cashiers to have cups at the counter and encourage people to grab a cup on the way out.”

Another alternative in the face of price increases is to emphasize flavors, Phibbs said. He recommends changing an ongoing rotation of flavor profiles.

“I would change them at least once every three weeks or so, so it’s not just Colombian but a vanilla flavor, or encourage people to mix and match them,” Phibbs said. “You could have two or three flavors. That would be a way for you to stand out from the other guys. But you need some signage around that, and something that tells that story.”

At its 15 locations in and around the Augusta area, Sprint markets its coffee program on pump toppers and exterior signage. It has also introduced a mobile app for iPhone and Android that lets it communicate directly with consumers on the move. The new move has enjoyed early success.

“Currently we have about 1,870 customers with the Sprint Foods app,” Lloveras said. “About four months ago we had zero, so we’ve grown it pretty significantly. Now, when consumers wake up in the morning we have the ability to hit their phones with a message. We can talk about fresh, we can talk about our offers. That’s a very good way, and a reasonably priced way, for us to get the word out.”

MUG SHOTS
Some stores are pushing sales even further through related coffee products, such as mugs and other related gear.

“We haven’t had a lot of travel mugs or the refill-type vessels,” Lloveras said. “We will expand into more of those to make sure that cup holders have different feels when a customer is holding his cup of coffee.”
The good news is that unlike Starbucks and other coffee specialists, c-stores have many other items to sell that can help temper the impact of rising coffee prices, Montgomery said.

“My advice is to remain competitive,” Montgomery said. “When the price of coffee is going up carefully monitor what others are selling coffee for, and follow but do not lead the market.”

It is important to keep those coffee customers coming in to buy, not only their regular coffee, but all the other products that their market baskets contain. “Remember, when the prices go back down the market will not adjust, and will allow for the retailer to recoup any ‘lost’ gross margin dollars.”