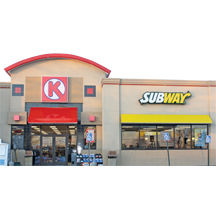 Who says you can’t please everyone?

When it comes to foodservice, co-branding with established restaurant concepts enables the Kwik Stop stores in and around Dubuque, Iowa to cover every need and customer from can’t-spare-more-than- a-minute consumers who only have time to grab a quick sandwich to go to those who want to relax over a full meal.

The co-branded concepts also make it possible for the stores to appeal to all age groups—from adults to kids—and to offer a range of healthful to indulgent eating options.

In seven of its 15 c-stores, Kwik Stop partners with established branded concepts. Last year, one store opened an 84-seat full-service Fazoli’s Italian restaurant, which serves pasta, pizza and submarine sandwiches. A drive-through makes it super-convenient for consumers on the go.

The restaurant “is doing very well,” said Jill Reimer, vice president of Rainbo Oil Co., parent company of Kwik Stop. She explained that the high level of consumer awareness around the national brand has helped to make the store into a destination.

MUTUALLY BENEFICIAL
The c-store program is as new to Fazoli’s as it is to Kwik Stop. Reimer pointed out that Fazoli’s is as encouraged by customer response to the program as her company is.

DQ and Subway are two other national brands represented at other Kwik Stop stores. Another Fazoli’s and DQ are in the works.

Reimer explained that the name brands also brought a halo of quality to all of the food products sold at the stores.

“Seeing that well regarded brand defeats the mindset some people still have about convenience store foods,” Reimer said. “They come in expecting a good quality sandwich or piece of pizza.”

And that’s just what they get, Reimer said, whether they choose to purchase their food from the branded restaurant concept or a grab-and-go sandwich from the cooler. Reimer pointed out that having a selection of brands from which to choose is important because not every brand is right for every market area.

“We look at each specific market area to see the competition and what is lacking, and then we choose the brand that fits best,” Reimer said.

Co-branding partners, said Robert O’Connor, president of Jetz, which has three locations in the Milwaukee Metropolitan area, must share the Jetz appearance, product and service
standards to complement the stores’ own JetzGrill and JetzFresh branded programs.

“What we do we do very well, but we can’t do everything ourselves,” O’ Connor said. “If we try to run a
restaurant, the c-store may collapse and vice versa. Running restaurants is better left in the hands of the experts, at least that has been our theory.”

The JetzGrill program features tornados, corn dogs, brats and Italian sausages, along with the hot dogs. An outside commissary prepares the private label sandwiches, wraps and salads that make up the JetzFresh program.

“We offer premium products so why not capitalize on that by putting our name on them,” O’ Connor said. “We do a good job and want to be equated with the quality products we offer.”

O’Connor emphasized that the company has to feel the same way about the branded restaurant concepts with which it partners. It’s important, he said, for Jetz to be able to take the same level of pride in offering those brands as it does selling its own.

These programs appealed to GoMart management because they provide high quality, in-demand products, said Paul Gaughan, the company’s general manager. Unlike a quick-service restaurant brand with which the company previously partnered, Sub Express and Pizza Primo do not require a franchise fee.

GoMart does a strong business with its proprietary, branded fried chicken program. For the program, which has been in place since 1980, fried chicken and potato wedges are prepared at 16 of the stores and merchandised in six-foot wide hot cases, along with sides and entrees. Cold and hot subs and salads are displayed in self-serve hot and cold cases.

GoMart is also known for its signature pepperoni rolls, a stromboli-like dough-wrapped meal or snack that is a favorite in the markets the 116 location chain serves in West Virginia, Virginia and Ohio. At 30 of the stores, the rolls are made on site, while for the other stores, a supplier provides them.

BUCK UP
Buchanan Energy’s Bucky’s Convenience Stores has also taken proud ownership of its grill offering. At Bucky’s, the brand is B-Grillerzz Dogs—the ‘B’ is for Bucky’s, said Dan Miller, media marketing director for the chain, which has 70 locations in Chicagoland, Greater St. Louis and Omaha, Neb. The grab-and-go sandwiches available at the stores also have their own Bucky’s-derived brand name, B-Fresh.

Both programs have been in place for at least six years in the chain’s larger stores, Miller said, and they are constantly building momentum as consumers taste the products and realize that they can trust in the high quality and freshness of the Bucky’s brands. The B-Grillerzz and B-Fresh brands can currently be found in 45 of the company’s stores.

In addition to the regular dogs, Bucky’s also sells 10 varieties of tornados, corn dogs, brats and Polish sausage from its roller grills. To keep the grill products fresh and appealing to customers, the stores follow a well-researched build-to guide, which tells them what variety and how much product they should have on the grill at any given time of day.

The B-Fresh Sandwiches are made by a local outside supplier and delivered to the stores daily. While the stores carry other branded sandwiches in addition to their own, the B-Fresh selections are the biggest sellers, said Miller.

REMEMBER THE BRAND
“Our brand assures customers that we know how, where and when those sandwiches are made,” Miller said.

At any given time, the stores will stock at least a dozen varieties of the B-Fresh sandwiches. There’s also a selection of six different salads.

“We often have to restock our sandwiches and salads one or more times during the lunch rush,” he said.
Whether for an established name brand concept or a proprietary brand, the impression of freshness starts long before the first bite, Jetz’s O’Connor noted. Although that’s really “where the rubber meets the road,” curb appeal is key because it is what gets customers into the stores in the first place.

That means, he said, well-maintained landscaping, good lighting and strong and attractive signage and other outdoor graphics to grab people’s attention.