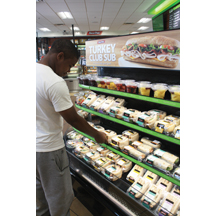 As retailers try to distinguish themselves through better customer offerings, CSD partnered with Study Hall Research to examine what foodservice components bring the highest returns.

Those words continue to ring true, but now the stakes are even higher. “We’re seeing a shift in patronage to retail fresh prepared foods,” said Mary Chapman, senior director, product innovation for Chicago-based research and consulting firm Technomic Inc. “Sixty percent of consumers now say they purchase prepared foods from grocery stores at least once a month, and 37% say they buy prepared foods from c-stores on a monthly basis.”

C-stores in particular compete with restaurants when it comes to occasions like a quick bite or a stop while running errands or on the way to work.

A convenience store customer’s experience at the store can be as influential to his or her decision to visit again as are the menu items and prices, Chapman said. “Consumers say the most important elements are taste and flavor of the food and food quality, which were ranked as important by more than nine out of 10 respondents. Quality of the beverages and visually appealing food also rated among the top 10 most important attributes,” he added.

Respondents were asked about frequency of food purchases at convenience stores, perceptions of food quality and other foodservice-related questions.

Overall, 414 surveys were completed. The business industry-accepted standard for precision in a 95% confidence interval is an error rate of less than plus or minus 5%, a standard this survey eclipsed.

What Customers Want
More than 61% of those surveyed who said they purchased foodservice items from a convenience store in 2014 did so with a specific brand inside the store (Sheetz, Wawa, Subway, Godfather’s Pizza, etc.). This is a nearly 10% drop compared to the 70.1% recorded in CSD’s 2013 Foodservice Report.

During the past two years, microwaveable food products proved the smallest percentage of food purchases from a convenience store. In 2014, 23.1% of those polled purchased such items within the last 30 days.

The survey found that 75.5% of respondents prefer to purchase food at a strong national or regional branded store, such as RaceTrac, 7-Eleven, Shell or Circle K. For those consumers, fresh items, such as sandwiches, doughnuts and pastries, were the primary drivers for food sales.

The industry’s effort to focus in on fresher foods appears to be gaining momentum with 46.8% of customers responding that they would consider purchasing salads at a convenience store, a 1.5% spike compared to 2013.

Those kinds of numbers are what c-stores are paying more attention to. In the last few years, coffee service has grown more customized and personal at Rutter’s Farm Stores, said Jerry Weiner, vice president of foodservice for the 62-store chain, based in York, Pa.

“Regular and decaf aren’t enough anymore,” Weiner said. “Variety is what appeals to the masses.”
Rutter’s has expanded its hot beverage selections to include more types of coffees, teas, espresso, frappes and lattes. Also, taste enhancers, such as creamers, syrups, toppings and whipped cream, have sweetened Rutter’s plans to add more value to its coffee category.

After finding the right blend, the company has successfully branded its different coffees, prompting a strong customer following and increased sales.

At the time, he felt the company’s coffee was weak—as in an uninspired product and lacking an identity. Lorance then led the charge with the concept that eventually changed the view of coffee as a single item in the revenue mix to a total store traffic driver that would make Cumberland Farms a coffee destination.
Following heavy promotions and a lot of effort, the category is a primary sales driver now.

“This was a decision from the top down and adopted by the entire company,” Lorance said.

Analyzing Behavior
When asked about the frequency of their foodservice purchases at convenience stores, 21.6% of those customers polled said they purchased food 4-7 times per month, which is a decrease of 28% from 2013.
Despite the sharp decline, customers reported solid increases in fill-in snacking purchases, which might account for the dipping numbers. When asked to recall their purchase behavior from the last two years, 34.2% of c-store foodservice customers said they purchase snacks from convenience stores more often now, compared to two years ago.

Snacks seemingly represents the top growth area for repeat purchases by convenience store foodservice customers in 2014 when compared to their purchase behaviors for breakfast, lunch or dinner.

The majority of those that reported their purchasing habits have decreased over the past two years are replacing their former convenience store purchases for breakfast, lunch, dinner or snacks with food items that are prepared at home.

Food items with the highest stated repeat purchase potential based on consumption in the past 60 days are hot dogs/sausages, sandwiches, pizza, rolled foods and doughnuts/pastries.

Offerings facing the greatest barriers for trial are hamburgers, fried chicken and BBQ/buffalo wings. (Greater than one-third of convenience store customers have not tried these food items and don’t plan to consider purchasing them in the future.)

Snack Daypart
It’s no secret that quick-service restaurants (QSRs) have been competing against each other for decades with regard to market share in the three key dayparts of breakfast, lunch and dinner. This changed in 2013. Rather than solely focusing the fight in areas where the only gain is incremental share in the already saturated dayparts, quick-service restaurants began to develop a plan to grow an entirely new audience: snackers.

Convenience stores have long been a dominant player in the snack category, which puts a target on their backs.

By offering smaller, lower-priced snack items, QSRs can now extend their value proposition to on-the-go consumers, who currently use c-stores for snack items.

Some of the trends we are seeing with regard to snacks center around ‘poppables.’ These 1-2 bite items are growing in popularity and can be either sweet (cinnamon, sugar, pretzel bites and miniature doughnuts) or savory (spinach and artichoke bites, sloppy joe bites.)

It’s important for convenience retailers to explore, test, and offer quality snack items that rival the offerings at QSRs in order to grow their business.

Technomic found that more consumers care about healthy eating, and react positively to pick-and-choose options for items that are gluten-free or even vegan. In addition, Asian foods, which have been trending for years, continue to increase in popularity. During the year ahead, consumers will be looking for more Korean and Vietnamese foods as well as upscale versions of spicy ramen noodles.

“It seems like tastes are getting more varied,” Weiner said. “York, Pa. is a pretty bland flavor-profile market, and recently I’ve had an immense amount of success with a sriracha hot sauce as an option. We call it the ‘bada-bing’ and offer it as an option to squirt on things like fried shrimp.”

Weiner has also noticed that his stores are using more of the spicier ingredients, such as jalapeño peppers and both pepper jack and nacho cheeses.

“The market is moving into a much broader, more flavorful profile than it ever was here,” Weiner said. “And if it’s happening in York, Pa., it’s probably exponentially greater in the rest of the country.”

Other foodservice trends that will continue to expand during 2015 include more healthful kid’s meals; cauliflower replacing kale as the most versatile vegetable; the African fruit baobab becoming popular; acai and goji; and vegetable—including beet, tomato and butternut squash—yogurt, which many predict will push out more sweet fruit yogurts.

“What we know is that there is acceptance of good food being offered on trucks,” said Chris Tripoli, the principal of the A’la Carte Foodservice Consulting Group in Houston. “What was long ago looked at as just a convenient way to get ‘average’ food like deli sandwiches to workers became a great new way to receive kabobs, gyro sandwiches, steamed dumplings, tacos, pulled pork and even sushi.”

More than nine out of 10 consumers say the most important elements of foodservice are taste and flavor of the food and food quality. Comprising approximately 28% of retail foodservice and generating $11.2 billion in sales, proprietary convenience store foodservice has become a key area of opportunity across the country.

Technomic’s “Convenience Stores Market Intelligence Report” compiled exclusive data to understand market opportunities. As the segment continues to face stiff competition and works to overcome consumers’ negative quality and freshness perceptions, Technomic anticipates nominal growth of about 2% in both 2014 and 2015 (2.5% in 2014; 2% in 2015), and after adjusting for inflation, the overall segment will be flat.

Yet, convenience stores serve as a prime destination for younger generations and people seeking fast, on-the-go options, and there are plenty of winning chains and opportunities for growth.

Other findings from the Convenience Store Market Intelligence Report include:
• Breakfast sandwiches continue to thrive on c-store menus, and their numbers climbed 20% from the second quarter in 2013 to the second quarter of 2014.
• More than nine out of 10 consumers say the most important elements are taste and flavor of the food and food quality.
• Energy drinks saw a significant surge in availability at c-stores, contributing to the category’s nearly 23% growth in menu items.