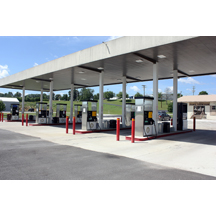 After the city of Somerset, Ky. opened its own gas station last summer, a Kentucky senator has now sponsored a bill to determine how fair the enterprise is to surrounding businesses.

Kentucky Sen. Chris Girdler (R-Somerset), on Feb. 6, filed a bill that would require government entities to conduct a study to determine what impact the sale of commercial products and services would have on the local community before the government could enter the retail market.

The legislation, known as Senate Bill 130, is an answer to a gas station opened by officials of Somerset last year. The station was opened to assist local residents, who for years have been gouged by high fuel prices, city officials asserted. Somerset City Council in the summer of 2014 approved an ordinance authorizing the city to sell regular (87 octane) gasoline.

In addition to the study, Senate Bill 130 also would require a public hearing on the proposed sale of a commercial product or service. It also requires governments to keep accounts for commercial products and services separate from all other government accounts or funds in order to preserve its integrity and promote transparency, should the local government continue its pursuit to compete with the private sector.

“Contrary to reports from the Commonwealth-Journal, I have never stated that it is my intent to ‘nix city gas sales,’ or ‘shut down Somerset’s retail gasoline station,” Girdler said.

Somerset is a popular Kentucky traveler town located on the northeastern edge of Lake Cumberland. For as long as most residents can remember, spiking fuel prices have been a sore subject, especially when tourists flock to the area every summer. Though the cost of fuel in surrounding towns seemed aligned with the market, gas prices always seemed artificially inflated in Somerset—often 20-30 cents per gallon higher, according to city officials.

After the gas station opened, local and national media have jumped on the story, especially since Somerset became one of the first municipalities in the country to sell gas under its own banner.

However, retailer and petroleum groups assert that the Somerset Fuel Center, located on Chappells Diary Road, has caused unnecessary pressure in the marketplace.

Girdler said the legislation doesn’t take a position, except to certify that the scales of free enterprise are balanced.

“The legislation I have filed is intended to level the playing field, so if a government entity chooses to compete in the retail marketplace, they follow the same tax obligations, bookkeeping requirements, and market pressures that taxpaying business owners encounter daily,” Girdler said.