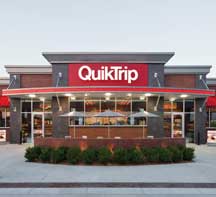 QuikTrip offers all Comdata MasterCard Corporate Fleet Card customers a discount of three cents per gallon on all gasoline and diesel purchases.

QuikTrip Corp. and Comdata Inc. have partnered to expand the reach of fuel discounts through the Comdata Fuel Consortium (CFC) network.

QuikTrip, a privately held company headquartered in Tulsa, Okla., has grown to more than 700 stores in 11 states since its founding in 1958. Through the CFC network, QuikTrip offers all Comdata MasterCard Corporate Fleet Card customers a discount of three cents per gallon on all gasoline and diesel purchases.

“QuikTrip is pleased to have this opportunity to provide a discount to customers through this platform. We look forward to a long relationship with Comdata,” said Jason Reed, manager of commercial fuels for QuikTrip.

“The idea for the CFC originated from Comdata’s client advisory board, a group of customers from whom Comdata solicits feedback on solutions,” said Todd House, president of North American Fuel Card. “This focus on continued growth of the network is representative of our commitment to the industry as a whole. The CFC allows merchants like QuikTrip to drive more business to their locations while providing additional savings for fleets.”

The Comdata MasterCard is issued by Regions Bank, pursuant to a license by MasterCard International Inc.