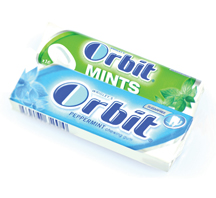 Gum and mints continue to battle for c-store share, but innovation promises to keep variety on the shelves.

After months of postponements since Hershey first announced it was developing a new mint, the candymaker recently released Ice Breakers Cool Blast Chews—priced at approximately $2 for a 0.8-ounce slide pack of 12.

Formulated to be chewy like gum, but also to dissolve like a mint after 10 or so chomps, this product looks to provide consumers with the best characteristics of both gum and mints that the market has experienced in a while.

Some observers feel this product innovation might add innovation at the seams between the two categories and lend a spark to both the gum and mint categories, which haven’t enjoyed a highly-anticipated product offering in some time.

In fact, some c-store operators hope the introduction of this hybrid will breathe fresh life into category sales that have gone stale over the past few years.

GUM AND GUMMIER
Compared with tobacco and foodservice, candy, along with both sweet and salty snacks, only comprises a small portion of total in-store sales for c-stores; slightly more than 10%, according to the National Association of Convenience Stores’ (NACS) State of the Industry report. Of those candy sales, gum and mints have regularly been overshadowed by confections and chocolate. Between the two, mints have consistently outperformed gum.

As an industry, gum still earned $3.5 billion in the U.S. last year. However, legacy brand Wrigley is trying to put some zip back into the category.

The company has since released a Starburst strawberry flavor. Starburst is also owned by Wm. J. Wrigley Jr.

The Juicy Fruit campaign comes as Juicy Fruit begins to show signs of rebounding. Dollar sales of Juicy Fruit grew 35% in the 52 weeks ending March 22 to more than $27 million, according to IRI.

Also grabbing attention are Wrigley’s recent commercials promoting 5 chewing gum’s slogan “Life Happens in 5.” The spots vary from a young ballerina, a group of teens and a young couple, each grabbing a piece of 5 gum before committing to a daring act, such as taking center stage, skinny dipping or going in for a first kiss.

Mars, which makes Big Red, Doublemint, Juicy Fruit and Orbit, has been testing illuminated racks in candy aisles at some retail sites to make its gum and candy stand out more.

MINT TO BE
Indeed, the NPD Group reported that Americans chewed gum an average of 1.4 times per week in 2014, a 30% decline from five years earlier. Meanwhile, mints dollar sales rose about 3%.

“I see mints doing extremely well and gum is stumbling along and not really finding its way. Adults would prefer a mint that is swallowable so they’re not stuck with a piece of a sticky thing,” said Mogelonsky. “That’s always been a problem with gum. What do you do with it when you’re done chewing? Also teens have mixed opinions on gum.”

Other reasons cited for the chewing slowdown include a shrinking population of smokers who often reach for a stick of gum to refresh their breath while also achieving a sense of oral satisfaction. Another is that Millennials simply haven’t adopted the habit. “Twelve percent of the [Millennials we surveyed in 2013] said gum is not appropriate for their age,” said Mogelonsky. “Also, they weren’t raised on chewing gum, so they don’t think of buying it.”

“The other thing that jumped out at me is that they said it was too expensive,” Mogelonsky added. “The economy has not bounced back to the level that Millennials are gainfully employed and employed at a level that they’re comfortable with not watching their spending.”

“It is believed that the mature adult population was the primary demographic for gum. Over the past year, with the new innovation in the marketplace, it seems that manufacturers are launching innovation to improve gum purchase rates with Millennials,” said Hilary Freedman, senior category manager of snacks and candy for Atlanta-based RaceTrac, which operates more than 380 sites in several states throughout the South.

“At RaceTrac, gum performance has been trending upwards over the past few months. We are seeing increases in units this year, and in years past, we saw trends in the opposite direction,” Freedman said.

“We anticipate a strong [third quarter] performance with a slight decrease in Q4, which is in line with year-over-year seasonality.”

“It’s starting to get back on track for us,” added Bailey Lyden, vice president, retail, for Brecksville, Ohio-based truenorth, which has 110 stores in Ohio and Illinois. “In mints, Ice Breakers sticks out; it’s up 13% right now. Also, Tic Tac is up 18%. Altoids is hanging in there at 19%, [but] Mentos are down 44% and Lifesavers are down 41%. This time last year, we had 6,600 units sold, and right now, we’re only at 3,600 units sold in mints, but with a price increase. However, we are up 1% in gum in year-to-date, ”
Although analysts have not pinpointed the exact reasons behind the recent surge in sales, both Freedman and Lyden suggest new flavors deserve some of the credit, particularly those that combine signature candy brands with signature gums.

“Mondelez and Wrigley have introduced crossover items that have performed extremely well for us, specifically the Stride Sour Patch and Juicy Fruit Starburst items,” said Freedman.

Lyden has tried to capitalize on the name recognition by predominantly positioning the candy alongside gum.

“We’re going to put new flavors in a prime spot because we want the customer to think that truenorth is relevant by keeping product offerings up to date,” Lyden said. “Confections are our biggest selling items, and to cross those with gum, we’ll do promotions, like buy a packet of Starburst and get the Juicy Fruit Starburst gum for $1. Hopefully that will drive sales into the gum category.”

A revised display strategy implemented three years ago seems to have boosted gum sales in the c-stores.

“A lot of c-store companies and operators will put gum and mints along the top of candy. In my opinion, that’s a big mistake and an old-school way of thinking,” Lyden said. “We created a four-foot vertical section dedicated specifically to gum and mints right next to the candy. Now our customers can shop the whole gum and mints section without having to walk up and down the aisle. It’s just amazing how much that has helped us. The category has never been more profitable.”