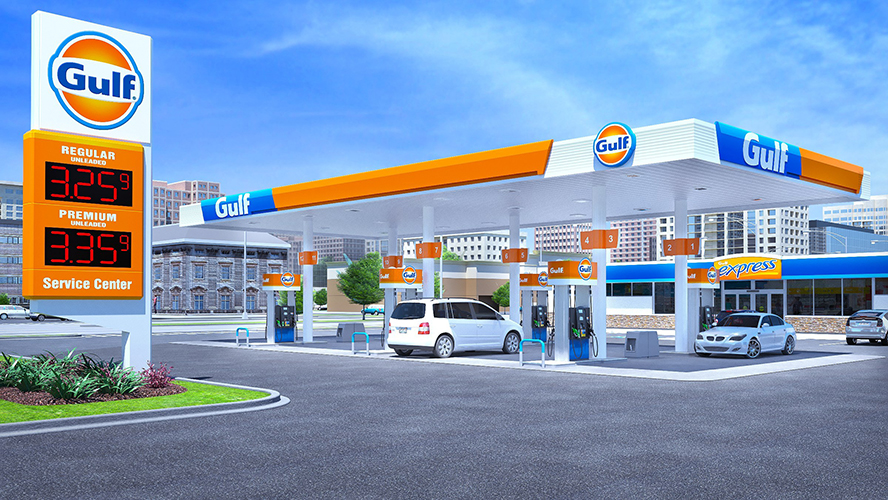 Wellesley, Mass.-based Gulf Oil announced the reimaging in March and plans to aggressively revamp approximately 700 dealer locations in the Northeast market over the next two years, including its 11 flagship locations on the Massachusetts Turnpike.

“Our mission is to distinguish the brand with offers that increase consumer loyalty and drive profitability for our branded marketers. We are confident this contemporary image will create a buzz of excitement in the market and generate incremental business for our customers,” said Sue Hayden, chief marketing officer (CMO) and executive vice president for Gulf Oil.

The reimaging includes a refresh of Gulf’s iconic orange-disc logo to include brighter variations of classic Gulf colors, a friendlier typeface and “warm gradient sun imagery.” It also represents a renewed commitment by the brand to a cohesive look and consistent values across its 1,800 forecourts that supply Gulf-branded gas and about 300 c-stores that sport the Gulf Express banner. Gulf operates in 36 states with its highest concentration of dealers located in the Northeast.

Time for A Change
Gulf’s previous image package debuted a little more than 12 years ago. “We’re at the very end of the typical life cycle of a retail image. Both our (retail) customers and consumers are ready for a change,” said Nikki Fales, director of marketing for Gulf Oil.

Since Eric Johnson took the helm as president and CEO of Gulf Oil in June 2017 — succeeding former CEO Jerry Ashcroft — Gulf has been focused more heavily on its brand image. In April 2018, Gulf welcomed Hayden, who is responsible for driving overall strategy for branded and unbranded operations in her role as CMO. With renewed focus on the brand, Gulf is ready for a new look as it moves full-steam ahead into its next chapter.

“We took a hard look over the past year at how our consumers perceived the brand through different research, focus groups and talking to customers in the industry,” said Fales.

Consumers responded that they preferred a modern, cleaner and fresher-looking brand, and they wanted to know and trust that every Gulf station incorporated the same values, even when operated differently. “People definitely still recognize the iconic Gulf brand and have a lot of love and affinity for the blue and orange. They are looking to see how we evolve with changing times,” said Fales. With its new design, Gulf is incorporating orange throughout its forecourt graphics, as well as a “friendlier” blue hue. The new graphics are expected to begin a wider rollout in the coming months.

In response, Gulf is defining itself graphically and ensuring the station experience is consistent between locations. As part of that commitment, Gulf revamped its mystery shopping strategy and partnered with GasBuddy to give branded distributors and dealers new tools for receiving feedback from consumers.

“We’re excited to get the new image out on the street, and there’s also a lot going on behind the scenes to make sure that, as we roll out this image, we’re keeping with what consumers want from us, which is an overall more consistent and reliable experience across all Gulf stations,” said Fales.

Gulf is continuing to differentiate with its iconic disc logo, which has been in place for more than 100 years, and its blue-and-orange color scheme, but in a new, fresh way.

“We’re flipping it around and owning the orange throughout the entire site. You’ll notice a lot more orange on the canopy and bright bursts of color throughout the forecourt, whereas the image was more prominently blue prior,” she said. “Orange is not common throughout the industry, so it’s a great way to distinguish the brand.”

The logo is updated to feature a modern, friendlier blue hue that casts a glow onto the canopy at night, said Fales.

“You now notice this dynamic blue beacon pulling you into the station. The new blue has helped us brighten up the forecourt and provide a more welcoming appearance.”

The font on the logo is a little curvier, bigger and bolder for a friendlier look.

Although Gulf doesn’t operate company-owned stations, it provides a branded gas offering and c-store banner package for retailers. Gulf is currently working on an image package for the interior of the Gulf Express c-stores. Gulf’s c-store partners have been excited about the changes.

C-store retailers won’t have to wait long to incorporate the new graphics. Currently, Gulf is rolling out the image to the Boston market and plans to move toward a full rollout in the next two months.

As part of the reimaging, Gulf is updating the graphics for its unbranded car wash and adding a specific image for its diesel island. While the diesel product is remaining the same, it marks the first time Gulf has offered a diesel image package. “Now retailers can ‘brand up’ their diesel island, whereas before it looked the same as the gas canopy. This adds a bit of dimension to the overall station,” said Fales.

Evolving with Technology
Gulf is also preparing for tomorrow by staying on the cusp of retail technology, including mobile payment.

Gulf introduced a loyalty and mobile payment app called Gulf Pay in July 2017, which presents new payment incentives to customers each quarter. Currently, if c-store customers link a MasterPass account within the Gulf Pay app, they get 20 cents off per gallon on their first three fillups. The app itself also offers regular incentives to inspire customers to use the app, such as five cents off per gallon with an in-store purchase.

“Gulf Pay is a huge initiative for us,” said Fales. “It’s been piloted for just a few years now, and we’re already seeing consumers using Gulf Pay an average of 2.7 times a month, which has doubled since we launched the app. That’s also almost double the industry average of customers visiting a gas station brand 1.6 times per brand per month.”

Gas customers type their pump number into the Gulf Pay app to authorize the pump. Inside the c-store, customers scan the app’s QR code to pay. Next up, Gulf plans to configure the app to interface with connected cars and the Apple Watch.

New this quarter, distributors and dealers will be able to enter their own store offers directly into the app.

“We’re looking to provide our customers with tools to ensure a great, consistent experience across all of our stations,” Fales said. “In addition, we’re focusing on Gulf Pay and how we can continue to evolve and provide more services for the consumer, and really just make the consumer’s life a little bit easier every time.”