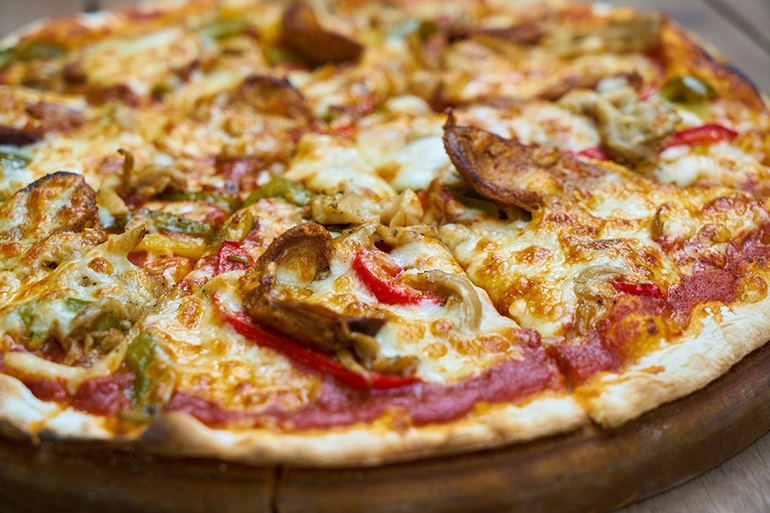 In a SNAP Keynote Report, “Pizza Power,” earlier this year, Datassential research firm found that consumers enthusiastically order toppings beyond the traditional, especially those that featured regional-favorite ingredients and flavor combinations, when convenience stores and other foodservice operators introduce them on their menus.

“We’re seeing growth in chicken-based toppings — chicken, bacon and ranch in particular is showing the biggest increase in menu penetration — and pizza crust as a platform for such popular menu standards as mac and cheese and even bar snacks such as beer cheese, a popular dip in the Midwest,” said Jackie Rodriguez, senior project manager at Datassential.

Flavor profile-wise, retailers can take pizza any direction they wish to go, making it a great platform for experimentation and, at the same time, a way to maximize the use of proteins and other ingredients they already have in inventory to come up with new innovations, said Rodriguez. She suggested that operators showcase their pizza versatility by promoting a new pie every week for a month.

At Cliff’s Local Market locations, the steady growth in pizza sales is partially fueled by the availability of 12 topping options and a constantly changing variety of specialty pies offered at the stores, according to Derek Thurston, director of foodservice operations for the New York chain. While the classics are always menu must-haves, he said, chicken variations resonate with customers.

Cliff’s has done particularly well with such creations as Buffalo Chicken with mozzarella cheese and buffalo wing sauce; Chicken Bacon Ranch, with a base of zesty ranch dressing topped with a mozzarella and cheddar blend and ranch drizzle; and Carolina Gold, with a honey mustard barbecue sauce, chicken marinated in the sauce and mozzarella cheese.

“We want to give the guy who comes in every day reasons to keep coming in,” said Thurston.

“BBQ Chicken Pizza” has been so popular at Kent Kwik convenience stores that it’s earned a place as a menu staple, said Stormy Williams, the company’s director of operations foodservice.

TRENDING TOPICS
In Datassential’s SNAP report, two-thirds of the respondents said they enjoy the flavor boost that a dip or sauce adds to their pizza experience.

Among those mentioned were marinara, garlic sauce and ranch dressing.

Aside from reflecting local tastes in ingredients, pizzas also vary in configuration in different regions of the country, and many consumers are fiercely loyal to their hometown type of pie, said Rodriguez. Residents of New Haven, Conn., for example, tend to favor an oblong pizza with a charred crust, while, in Detroit, consumers like a thick, airy crust.

Breakfast pizza is one of the fastest-growing varieties on convenience store menus, according to the SNAP report. Its inclusion has grown 63% since 2013.

“With their brisk morning coffee programs, c-stores have a great opportunity to sell breakfast pizzas,” Rodriguez said. “It’s a portable, hand-held alternative that’s as convenient as a breakfast sandwich or burrito.”

Kent Kwik stores serve up breakfast pizzas with a regional twist. One of its two top sellers is topped with bacon, egg and salsa —“Welcome to West Texas”— said Williams. The other pizza offers sausage and egg on a sausage gravy base.

When Datassential asked consumers why they choose the place where they purchase pizza, a primary response was convenience.

“C-stores should leverage their advantage of having convenient locations by making sure that every customer who comes in, even ones that are coming in just to get a
cup of coffee, knows they sell pizza,” said Rodriguez.

SLICES TO PIES
Seventeen of the 19 total Cliff’s Local Market stores offer pizza. A merchandiser for grab-and-go slices is located up front, in between the two cash registers “… making sure we don’t block the Slim Jims and lighters,” Thurston said.

“Slices are a huge part of our pizza business,” he said. “And once customers realize we have pizza, they buy whole pies as well.”

Kent Kwik has made-to-order pizzas in 14 of its 45 stores in Texas, New Mexico and Oklahoma and grab-and-go items serviced by its proprietary commissary in all of them. The company recently retrofitted one of its Kwik Eats Cafes fresh delis to accommodate made-to-order pizza, and it will be part of the cafes going forward, Williams said.

Because pizza has “great food cost and really good margins if you make them with the right measures of cheese and meat,” Kent Kwik will be focusing advertising efforts to promote their program, Williams said. Some of that effort will be with local coupon mailers, but the majority will be regular and digital billboards, window clings and pumptoppers.

Thurston believes that value is a big part of the equation that determines where consumers purchase their pizza. To highlight the value of Cliff’s offerings, the stores promote two pizza slices for $3.99.

“When we offer this promotion, at least 34% of our customers go for the two slices,” Thurston said.

He is also planning to keep introducing new pizza varieties “so the selection doesn’t get old and we continue to encourage impulse purchases,” and tracking their success. Most of all, he said, the stores will focus on operations, continuing to make and present the pizzas correctly, including changing out the grab-and-go slices every hour and a half.

For its corporate stores, Empire recently signed a deal with Orion Food Systems to offer the Hot Stuff concept. After only 30 days following the introduction of the concept in some of Empire’s stores, pizza is “selling beyond expectation in a short time” and is likely to be rolled out to the rest of the corporate stores after testing, Roccagli said.

“I run across very few stores that can’t put together a successful pizza made-to-order and/or grab-and-go program, whether it’s leasing space to a national brand, baking off frozen products or making fresh-dough products in-store, if it’s executed correctly,” Roccagli said.