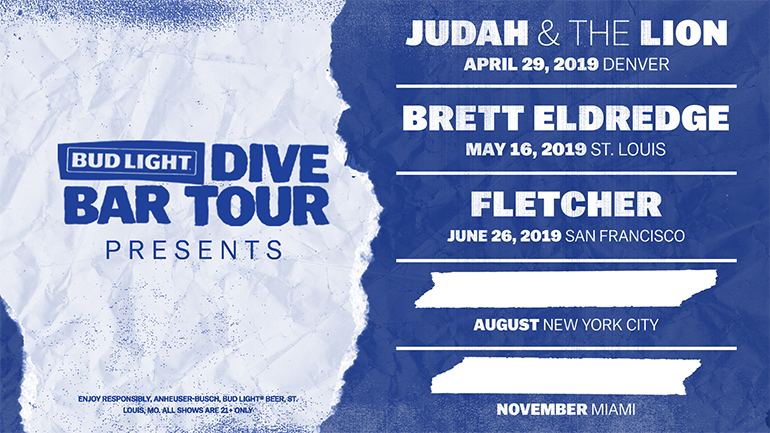 The Bud Light Dive Bar Tour is back for the fourth consecutive year.

This year, the popular series that brings sell-out artists to intimate dive bars stages is going to more cities and featuring more artists than ever before. More cities and artists mean a more diverse lineup that includes up-and-coming musical acts in addition to award-winning artists that have made the Bud Light Dive Bar Tour famous.

“We can’t wait to bring Bud Light Dive Bar Tour to more cities and feature more artists than ever before this year,” said Shana Barry, director of experiential at Bud Light. “This has been such a dynamic program for us over the years, and being able to expand it into new genres with both established and up-and-coming artists is something we are very excited about. One thing we’ve learned from our previous shows is that there’s no better way to enjoy a Bud Light than among friends at a local Dive Bar listening to your favorite artist. We love this year’s lineup and we still have more surprises in store when we announce the rest of our lineup later this year.”

The Bud Light Dive Bar Tour will make its first stop on April 29 in Denver, joined by the three-piece alt rockers of Judah & The Lion. Then it will travel to Anheuser-Busch’s hometown of St. Louis on May 16, where country music superstar Brett Eldredge will hit the Dive Bar stage.

Artists for the final two shows will be announced later this year. As always, fans can expect an intimate show, with many of the artists giving an exclusive look into new music and more.