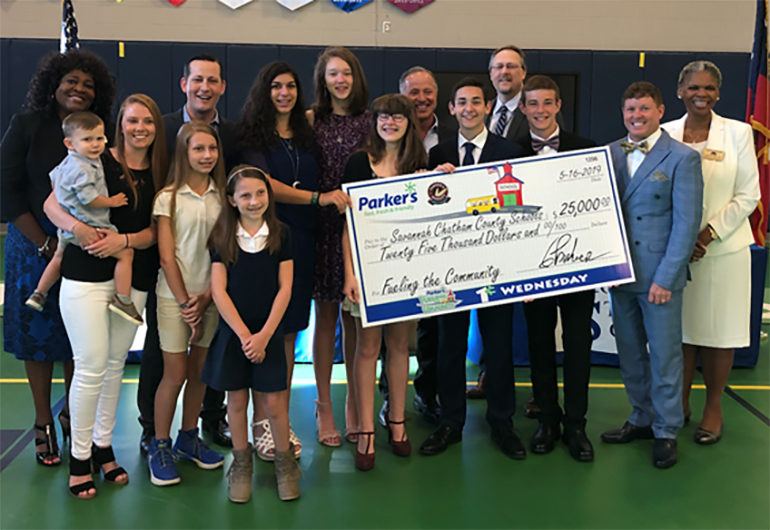 Parker’s donated $25,000 to Savannah-Chatham County Public Schools as part of the company’s Fueling the Community charitable initiative, which allocates a portion of the proceeds from gas sold on the first Wednesday of each month to area schools.

The check was presented at Godley Station K-8 School in Pooler, Ga. on May 16.

“Savannah is the heartbeat and headquarters of Parker’s, and I feel it is our responsibility to nurture future leaders,” said Parker’s founder and CEO Greg Parker. “At Parker’s, we believe education is the tide that floats all ships. Education has the power to transform lives, offer opportunities and strengthen communities.”

Parker’s launched its charitable initiative in 2011 and donates money to schools in every community where the company operates stores. Parker’s has donated nearly $1 million to area schools since the inception of the Fueling the Community program.

Deeply engaged with the communities it serves, Parker’s endows the Parker’s Emergency and Trauma Center at Memorial Hospital in Savannah and spearheads the Keep Savannah Clean anti-litter campaign. In 2019, Parker’s also donated a record $5 million to create the Parker College of Business at Georgia Southern University.

Founded in 1976, Parker’s has earned accolades for its Parker’s Rewards loyalty program, award-winning Fueling the Community charitable initiative, innovative mobile app and acclaimed PumpPal program, which has saved customers more than $10 million since its inception.

The company employs nearly 1,000 individuals throughout the region and completes more than 125,000 transactions daily at 57 retail stores throughout southeast Georgia and South Carolina.