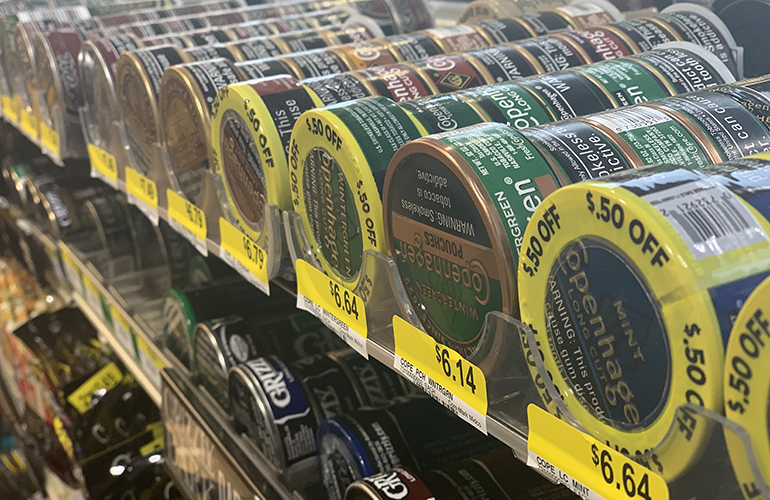 While smokeless tobacco like moist snuff and spitless snus are but a tiny fraction of tobacco sales, a number of health, regulatory and market forces could be lining up to give smokeless a boost.

According to the U.S. Federal Trade Commission’s Smokeless Tobacco Report for 2016, the five major U.S. smokeless tobacco manufacturers spent $759.3 million on smokeless tobacco advertising and promotion in 2016, an increase from $684.9 million spent in 2015. That amount dropped to $718.3 million in 2017. Yet, sales of both moist and snus are on the rise. And that trend is projected to continue.

Globally, the smokeless tobacco market is expected to register a Compound Annual Growth Rate (CAGR) of 4.7% during the forecast period, 2018 to 2023, according to a Mordor Intelligence Smokeless Tobacco Study released in March of this year. Cigarettes make up 89% of the world’s tobacco sales, according to Global Tobacco Market Report by international market research provider Euromonitor International. All others, including e-cigarettes, make up 9%, with smokeless accounting for just 2% of sales. Those numbers tend to bear out at the local retail level.

“Basically, in the next few years, we expect to sell more snus than we have, but it’s a really small part of our business right now,” said Dyson Williams of Dandy Mini Marts, based in Sayre, Pa., with 64 stores in New York and Pennsylvania. “We carry Camel Snus now, and we’re pretty much exclusive with them other than four stores that do … Swedish Match’s … General.”

Snus maker Swedish Match is also now selling its spitless nicotine product that is consumed just like snus but with no tobacco. It’s called ZYN.

“It’s a non-tobacco nicotine pouch,” said Mike Clifford of Clifford Fuels. “I think they’re trying to make it like, similar to a snus but little, you know. They’re shooting for a more simple, pure product.”

Swedish Match recently broke ground on a $100 million expansion of its plant in Owensboro, Ky. Nearly half of the additional 34,000 square feet will be dedicated to the production of ZYN, which began rolling out nationwide in April after an initial soft launch in a limited number of retail stores in Colorado, later expanding to 14,000 stores in 11 Western states. The same plant already produces several brands of moist snuff and chewing tobacco.

A few retailers told CSD they are concerned that pharmaceutical companies may perceive nicotine pouches as no different than their prescription nicotine delivery systems and demand they meet the same regulatory requirements.

With the shifting legal landscape around cannabis and growing number of products like CBD-infused waters, lotions and gummies, to name a few, it’s not surprising to hear of new Cannadips, a smokeless CDB snus product out of Humboldt, Calif. Cannadips’ three flavors —American, citrus and mint — also contain 150 milligrams of THC (tetrahydrocannabinol), and are designed to get users high. Only the mint flavor offers the option of either THC or the CBD-only variety, which does not have psychotropic effects.

At Dandy, Williams said despite a growing array of flavored herbal and coffee grounds dip and snus options, the chain has been carrying mostly Smokey Mountain for nearly 20 years and sees no need to bring in any other brand.

“We’re pretty happy being exclusive with Smokey Mountain for now,” Williams said. “There’s not that much demand where we’re ready to bring in a competitor yet.”

Harm Reduction
Alex Clark is the CEO of the 250,000-member Consumer Advocates for Smoke-free Alternatives Association (CASAA). He expects as people move away from smoking cigarettes, more people will gravitate toward moist snuff and snus pouches.

“Smokeless tobacco is sort of the original harm reduction product for smoking,” said Clark. He also said health risks for smokeless tobacco use are minimal. He pointed out that, in June, smokeless tobacco was conspicuously absent from the American Cancer Society (ACS)’s list of 17 risk factors for cancer. Many in the industry see that as a subtle signal that the ACS is ready to say that smokeless presents a minimal cancer risk.

The landscape is certainly shifting, especially considering the April 30 approval by the U.S. Food and Drug Administration (FDA) of the sale of Altria’s IQOS device. The agency, however, did not rule on the separate iQOS application for Modified Risk Tobacco Product (MRTP) status.

The FDA is also currently reviewing the MRTP applications of Swedish Match’s General Snus, R.J. Reynolds’ Camel Snus and U.S. Smokeless Tobacco’s Copenhagen Snuff Fine Cut. It’s unclear whether the FDA will approve any or all of those applications, but the momentum seems to be shifting toward the side of smokeless products.

Philip Morris has indicated it may exit the cigarette business altogether. According to its 2018 Annual Report, the company is making plans for a major shift away from tobacco. The report noted the company is building its future on smoke-free products.

Whether these events are pointing to a gradual shift by smokers to smokeless tobacco remains to be seen. The trend seems to be moving in favor of smokers replacing combustible cigarettes with a less risky product or as a step toward quitting tobacco altogether.

According to a Fact.MR report, “Smoking Cessation Products Market Forecast, Trend Analysis & Competition Tracking – Global Market Insights 2018 to 2028,” the smoking cessation market grew by 12% year over year from 2017 to 2018. The same report projects the market will grow at a 10.8% CAGR through 2028.

As of right now, smokers are more apt to switch to e-cigarettes to quit, especially young adults. But with uncertain regulatory pressures and more new products hitting the market, there’s no telling if or how much smokeless sales will surge.