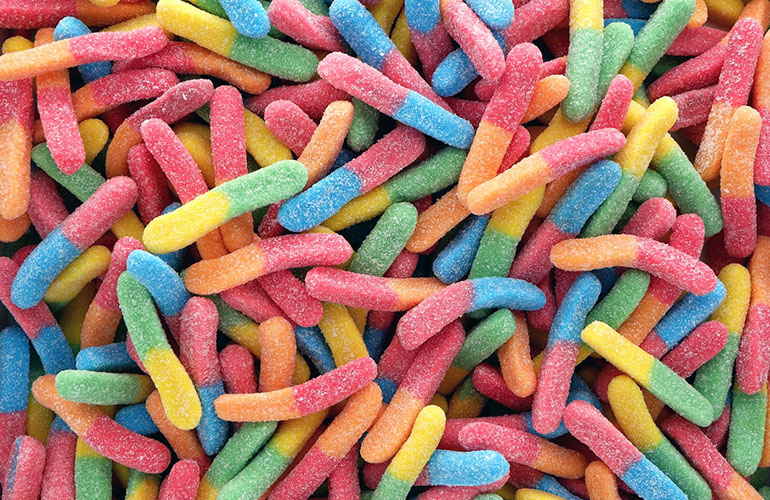 Non-chocolate candy products are vying to leap ahead of the pack with wild colors, interesting textures and daring flavors. But will new innovation be enough to boost sales in the segment?

Some 27% of non-chocolate confectionery eaters reported eating fewer products in the category in 2018 compared to 2017, with the highest percentage (61%) of respondents reducing consumption to lower their sugar intake, Bloom said. “Growth is forecast in both the chewy candy and seasonal segments through 2022, while hard candy and ‘other’ non-chocolate confectionery are expected to see dollar sales declines.”

Lisa Dell’Alba, president and CEO of Square One Markets, which operates eight c-stores in Pennsylvania, expects the non-chocolate candy segment to stay “relatively flat” toward the end of 2019, also pointing to healthier eating trends and a demand for smaller “bite-sized” treats.

But at The Hub convenience stores in North Dakota, the non-chocolate candy demand appears rosier. The five-store chain enjoyed a 9.3% increase in non-chocolate sales across all five of its c-stores from May 2018 to May 2019.

“This growth is about 50% greater than our overall inside sales growth during that period,” said Jared Scheeler, CEO of The Hub. He attributed the growth to successful execution of product promotions and working with manufacturers on product and set optimization. Scheeler expects the non-chocolate candy segment to continue growing in his stores given increased category innovation.

Mintel found strawberry continues to trend as a popular flavor, while tropical options are growing in popularity. Sour flavors make up a growing share of launches.

“Sour options appear to be getting more extreme,” Bloom noted. “Mintel Trend Sense of the Intense asserts that the dominance of screen culture has led to a cacophony of visual noise. As a result, marketers are increasingly seeking to stimulate the senses of touch, taste and smell to deliver more memorable products. …”

For example, Ferrara Candy Co.’s Trolli brand’s new Sour Brite Crunchy Crawlers won “Best in Show – Most Innovative Product Award” at the May Sweets & Snacks Expo. The brightly-colored treat creates a dual-texture experience with a hard shell on the outside and sour gummy on the inside.

Square One Markets is capitalizing on the rollout of most new candy products, including recent launches of Duos — or two flavors in one piece of candy.

“We have brought both the Starburst Duos and Ice Breaker Duos into the stores,” Dell’Alba said. “The fruit flavor seems to do well, especially with the young adult segments.”

At The Hub, extra-large standup bags, such as two-pound bags of gummy worms and 28-ounce bags of Mike and Ike, are resonating with weary travelers, Scheeler said. Opposite the national trend, The Hub’s sour segment has taken a slight decline over the past year.

“The growth we have seen is in non-sour candy as well as licorice,” Scheeler said. He expects the launch of Starburst to “provide a spark” to the line, and noted SweeTARTS sales are growing. “It doesn’t hurt that some of our top non-chocolate brands — Skittles and Airheads — have received an organic and likely unintended boost from some NFL players over the past few years.”

The Hub has worked with both Mars Wrigley Confectionery and The Hershey Co. in the past year to optimize its candy assortment and merchandising.

“The first thing we realized is that we didn’t have enough non-chocolate SKUs in our candy bar sets to maximize the category,” Scheeler said.

Once The Hub made that change, it saw an immediate increase in non-chocolate sales, he added. “But the interesting thing was that we also saw an increase in chocolate sales even though we technically eliminated some of those SKUs to make way for the non-chocolate.The optimization of product placement made a tremendous difference in our category sales.”

Signal Analytics found over the past two years ending February 2019, consumer discussion around the relaxing benefits of confectionery — such as those offering a calming effect, stress relief or sleep aid — has been steadily increasing, but market launches are lagging behind.

Consumer posts on relaxing confectionery have more than doubled over the past two years. The graph below shows the confectionery ecosystem, specifically gummies and chews, comparing products in market vs. consumer discussions. (U.S. & U.K. Data, March 2017 – February 2019) 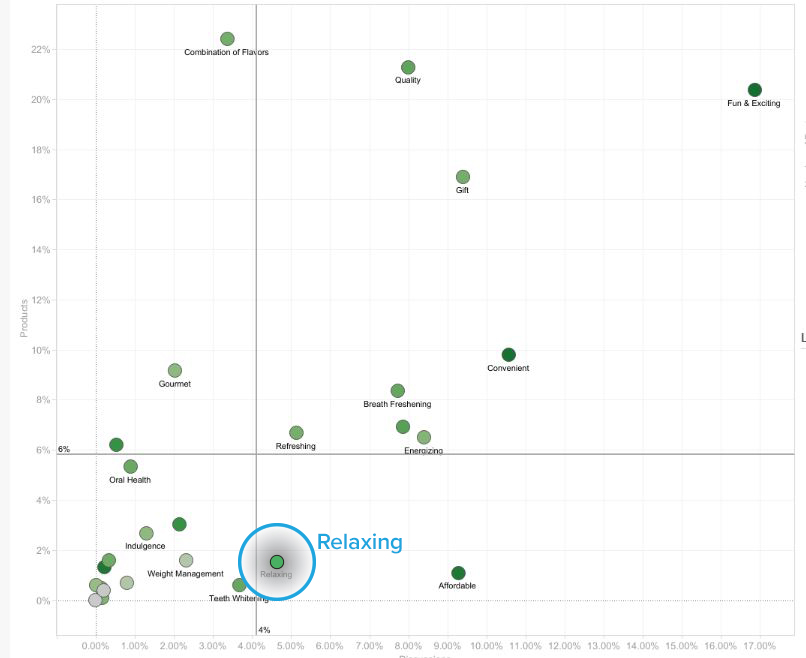