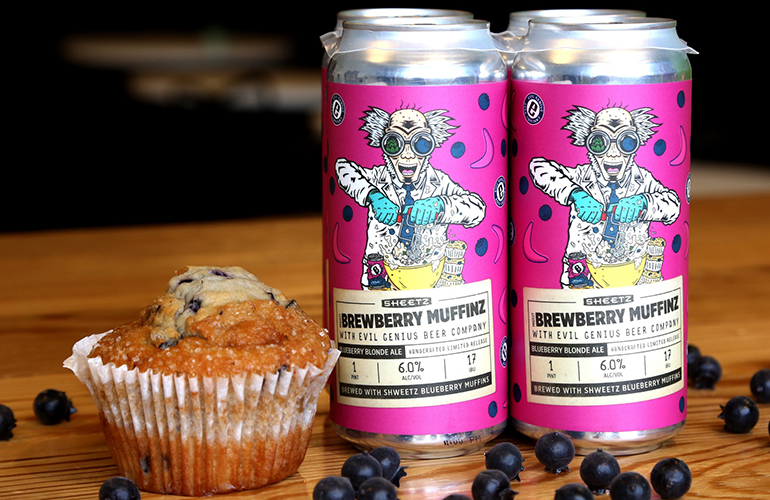 Customers can purchase the beer at 99 Sheetz stores across Pennsylvania starting Aug. 29 at 4 p.m.

Following the success of Sheetz’s first craft beer release in May, the new beer is a light-bodied blonde ale infused with Sheetz’s ‘Shweetz’ blueberry muffins. Sixteen-ounce four-packs of Project Brewberry Muffinz beer will be available statewide including in Altoona, Erie, Harrisburg, Lancaster, Pittsburgh, State College and York, retailing for $7.99 per four pack.

“Listening to our customers is a core value at Sheetz, which is why, following the overwhelming demand of our first limited-edition craft beer, we are thrilled to partner with Evil Genius Beer Company to announce the release of ‘Project Brewberry Muffinz’,” said Ryan Sheetz, AVP of Brand at Sheetz. “Furthermore, the timing is fitting, as we celebrate the anniversary of Pennsylvania’s Act 39 and the significant progress made since 2016. Three years later, Sheetz is selling beer and wine at over 160 stores and more are added every month.”

A small batch craft beer, Project Brewberry Muffinz will be available while supplies last and will not be restocked once sold out.

“We are honored to work with such a notable partner on another creative collaboration brew. Collaboration beers have been an area of tremendous growth for us and we love letting our creative juices shine in the process as we continue to make very serious beers with very silly names,” said Evil Genius Beer Company Partner and Co-Founder Trevor Hayward.  “As a bonus for this project, the partnership was the perfect pairing of our two companies as while our Tasting Lab is in the Philadelphia region, we brew our drafts and bottles in the heart of Sheetz country in Northeast Pennsylvania.”