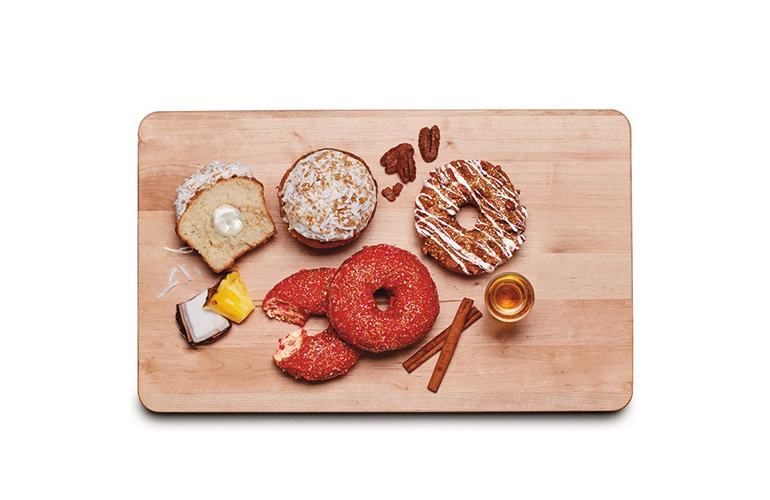 The three items are available at participating 7-Eleven stores.

All 7-Eleven bakery items in the fresh case are baked in local kitchens and delivered to 7-Eleven stores every day before the morning rush. Located on the top shelf of the bakery case, these premium limited-time treats have a suggested retail price of $1.99. They can be paired with any size cup of coffee or other hot beverage for just a dollar during the retailer’s fall coffee promotion.

“7-Eleven stores are in a unique position to offer innovative premium donuts at a great value, relative to the gourmet donut industry,” said Vareesha Shariff, 7-Eleven product director. “The new top shelf donuts and piña colada cupcake have distinctive flavors that play off mixology trends and the craft cocktail creativity that shows up in upscale bars and restaurants as well as on Instagram. They’re delicious, and you can drive after you eat one … or two!”

Proof that donuts are delicious all day long can be found on upscale restaurant menus where donuts are one of the fastest-growing desserts. Chefs use the simple circle of dough to build creative concoctions that bring a smile to diners’ faces and a post to their Instagram accounts.

Millennials and Gen Z-ers are always looking for more adventurous taste combinations and flavor mashups, and donuts are no exception. Alcohol-inspired flavors and unusual fillings show up as favorites on donut taste trend lists. Upscale, exotic and quirky donut shops that used to be a rarity can be found in every major city, but come with upscale prices.

“Donuts aren’t just for breakfast anymore,” Shariff said. “Sure, we sell a lot during the morning rush, but many customers come back later … in the afternoon or after dinner looking for a sweet treat. Donuts and cupcakes are affordable indulgences that everyone loves, and the new top shelf ones take the flavor up a notch.”