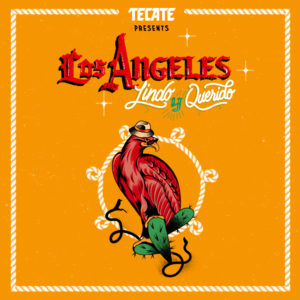 To celebrate Mexican Independence Day, Tecate partnered with Mexican-American musicians, helping them share their own journeys through music.

Mexican-American artists The Delirians, É Arenas, Katzù Oso, and Mariachi Lindas Mexicanas, created an original compilation called “Los Angeles Lindo Y Querido,” that is a reflection of their bicultural identity inspired by one of the most popular anthems of love and loyalty to Mexico, “Mexico Lindo Y Querido.”

The three individual tracks will also be merged into a mashup track that highlights the individual experiences of each artist growing up in Southern California while paying tribute to their Mexican roots. Produced by Mexican music producer Ulises Lozano, the EP honors the Mexican-American community’s cultural influence on Los Angeles.

As part of the project, Tecate is working with Mexican-American Directors Cliqua (Pasqual Gutiérrez and RJ Sánchez) to create a music video of the mashup. The EP and the music video made a limited debut on Sept. 12 at a private Tecate event hosted in Los Angeles celebrating Chicano culture, featuring performances by the artists involved in the project, as well as special guests including Kid Frost, Pacoima Techno, Ugly Primo, Chulita Vinyl Club, Chicano Playboy and Que Madre, hosted by DJ Lechero, Jose Hernandez (Eseveco) and Debbie Gonzales.

The compilation was also available on Sept. 13 via all streaming music platforms, including Spotify, Apple Music and Tidal, with the music video hitting YouTube that same day. As part of the Spotify release, Tecate also enlisted local chapter of DJ collective and Instagram influencer Chulita Vinyl Club to curate a playlist representing LA Mexican American artists to encourage more consumers to get into the spirit of Mexican Independence Day.

“We celebrate Mexican-Americans as both 100% Americans and 100% Mexicans. We believe there is no such thing as being half Mexican, just as there is no such thing as being half you,” said Oscar Martinez, Tecate Senior Brand Director. “Tecate is honoring and celebrating the Mexican-Americans who are breaking conventions, living life on their own terms, and redefining the US Latino journey. Our goal in this initiative is to give these Mexican-American artists a microphone to share their personal journeys through music, while putting a modern spin on a Mexican classic”

To further amplify the celebration of Mexican-American heritage, as the official beer of boxing, Tecate sponsored the Jaime Munguia vs. Patrick Allotey boxing match on Sept. 14, hosted in Carson, Calif. As always, the fight will bring fans closer to the action, and simultaneously kick-off Mexican Independence Day and Hispanic Heritage Month, Sept. 15 through Oct. 15.

“Mexican Independence Day weekend is one of the biggest boxing dates of the year, and a great opportunity to help the Southern California community celebrate one of Mexico’s biggest boxing stars while enjoying Mexico’s favorite beer,” said Martinez.