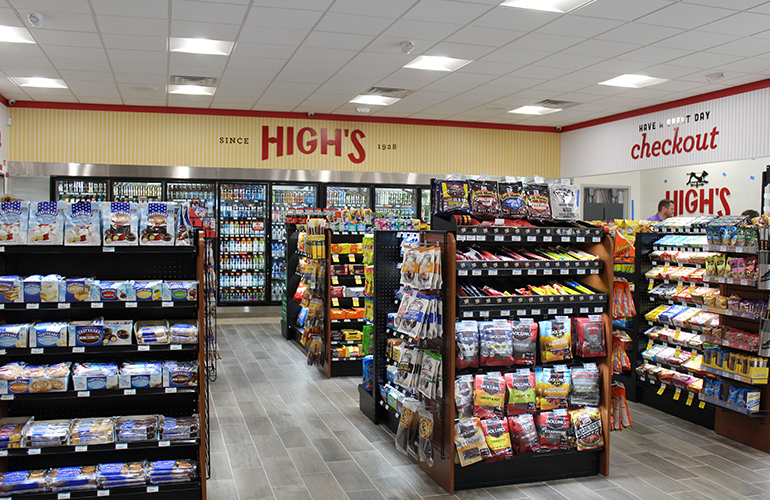 Baltimore-based High’s is rapidly approaching 50 store locations and setting its sights on expansion beyond its home state of Maryland. At the same time, it’s aggressively rebranding its c-stores and embarking on a “digital revitalization,” which includes leading the way as the first c-store chain to offer frictionless checkout in Baltimore.

“We really see us as trying to lead instead of follow in terms of technology now, to really be on the cutting edge,” said High’s Senior Implementation and Analytics Manager Noah Sanders.

A modern approach might seem counterintuitive for a brand as long-standing as High’s, established in 1928 as an ice cream store chain. But according to General Manager and Senior Vice President Brad Chivington, High’s has two main types of customers: those with a sense of nostalgia for the original brand and those who are drawn to modern elements like technology and foodservice.

In an effort to both modernize and standardize its stores, High’s partnered with Indianapolis-based creative specialists Three Sixty Group for a brand redesign in March 2018.

“We had a variety of different looks and feels as you went through our stores, and we really wanted to make a brand that would be lighter and more food-focused but still touch on our heritage,” said Chivington. 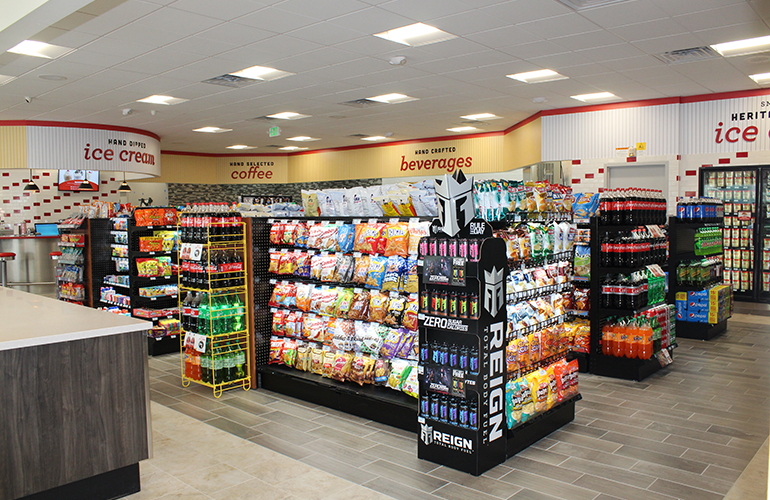 In 2018, High’s embarked on a brand redesign to modernize and standardize its stores. The newest store, located in Gambrills, Md., is the company’s first new-to-industry store to feature all of the new branding elements.

The company’s newest store — its 49th site — located in Gambrills, Md., is “the first new-to-industry store with all of the branding elements, from exterior to interior, with all of the image elements, down to the uniforms and apparel that the associates wear.”

In addition to remodeling its existing locations, the company plans to add one or two new stores per year.

“We have a number of pieces of real estate in the pipeline,” Chivington said.

And while all of High’s locations are currently in Maryland, this might not be the case for long. Chivington said the company is “looking at some of the adjoining states” for growth opportunities.

These days, High’s is known for its proprietary foodservice, which is made up of three primary components, according to Chivington: High’s signature hand-dipped ice cream, fried chicken and pizza.

“We’ve had better success with developing proprietary brands, better control over the product, the offering,” he said.

The hand-dipped ice cream adds a sense of nostalgia, Chivington said, as well as a new daypart driver. 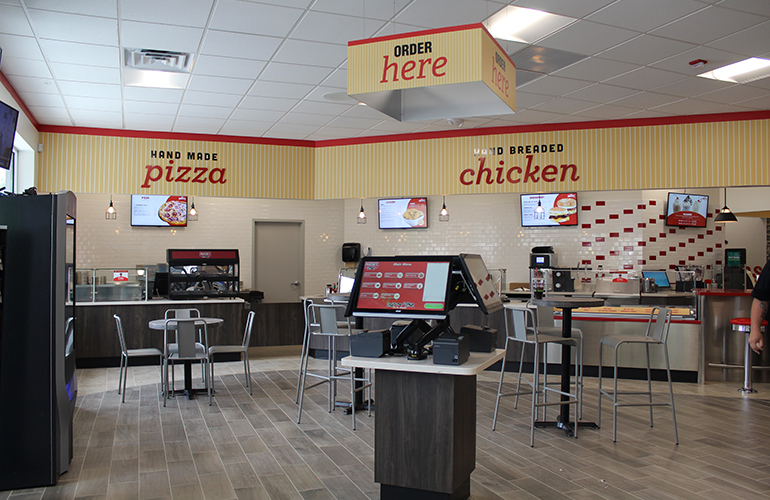 High’s has three primary components of its proprietary foodservice program: signature hand-dipped ice cream, fried chicken and pizza. The ice cream is both a nod to Highs’ history and an evening and weekend driver.

“Typically, communities are strong on breakfast and lunch, and this gives us an evening and weekend driver,” he said.

Fried chicken is also a big piece of the foodservice puzzle. Available at 10 locations with plans to expand, High’s offers tenders, sandwiches, sliders and more.

The third component is pizza. High’s pizza is offered at more than 30 locations now and is both customizable through a made-to-order option and available as grab and go.

High’s also offers traditional foodservice items such as breakfast sandwiches, burgers and roller grill items but, as is the norm at High’s, ‘traditional’ doesn’t mean ‘boring.’

“Something that we look at, even with traditional items, is how we can put a signature twist,” said Chivington, who cited the shoulder-cut bacon in the store’s signature breakfast sandwich.

Also notable are Highs’ bean-to-cup coffee, available in more than a dozen locations, and its bubbler program, which features craft beverages such as tea, lemonade and berry-flavored carbonated drinks.

In addition to remodeling and rebranding its stores, High’s is embarking on what it calls a “digital revitalization.”

As part of the process, the company now offers touchscreen menu ordering, which began rolling out last summer, at about 10 locations and counting.

The touchscreens, Chivington said, work well for both customization and suggestive-selling — and enable more efficiency in
the kitchen. 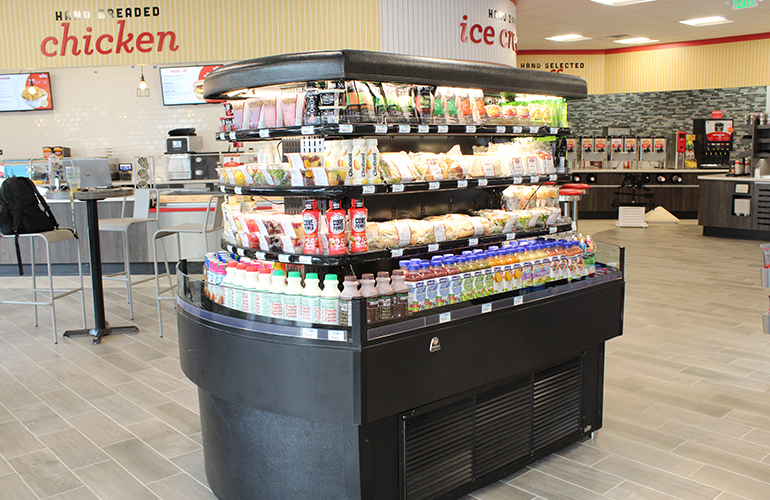 As part of its “digital reviatalization” process, High’s now offers touchscreen ordering at 10 locations and counting. The touchscreens allow for more efficiency as well as suggestive selling.

“The customer can place their order, go about the store and then pick up their order on completion,” he said.

But Highs’ foray into self-checkout technology may be its most significant endeavor to date.

In 2018, High’s partnered with Skip, a company that enables customers to use an app on their smartphones for self-checkout. High’s began testing the service at two locations in April 2019 and then rolled the program out to an additional 27 locations in May.

Employees are notified when a customer with the app enters the store and are able to monitor their purchases. This allows customers the freedom to shop at their own pace and leave without waiting in line.

Some 29 stores now have the feature, and Chivington said the response among employees and customers alike has been overwhelmingly positive.

“We have a lot of regular customers who have started to flip over to it,” said Chivington. “… The associates like it because they’re interacting with the customers a little bit differently. Now it’s a more genuine interaction with the consumer; it allows them to provide better customer service outside of that typical transactional customer service.” 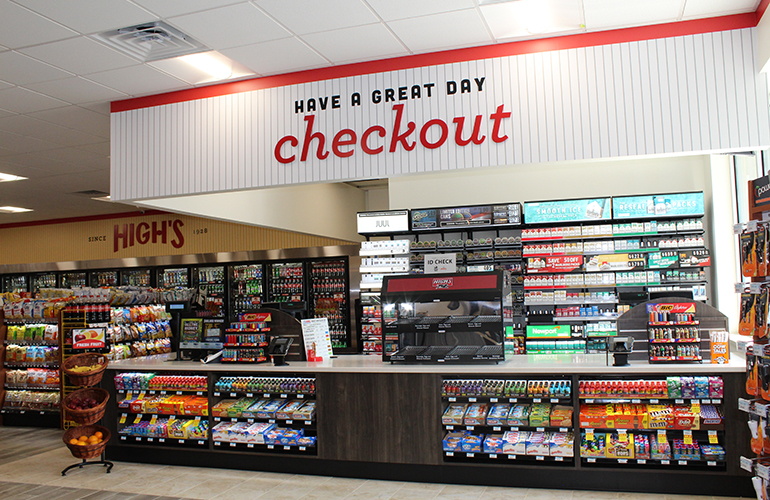 High’s now offers self-checkout at 29 locations through Skip. Employees are notified when a customer using the app enters the store and can monitor their purchases. High’s General Manager and Senior Vice President Brad Chivington said it’s been well received among customers and employees alike.

High’s is also in the process of switching to a new loyalty provider and private-label payment provider, which will ultimately tie in with the chain’s new checkout app.

“Our new proprietary app that will be our loyalty and private-label payment app will eventually integrate,” said Sanders. “It will have the pump activation and mobile payment, and it will integrate Skip into that, which will be our mobile ordering platform once we develop the APIs (application programming interface).”

This is in the testing stage, with no timeline for a rollout set.

But eventually, he said, a customer will be able to activate a pump, order food while they’re pumping, walk in, scan other items and pick up their food — all in one transaction.

“Part of the overarching strategy is just connecting all these technologies through the mobile phone device for the consumer for ease of use,” said Sanders. “We see that as the way that the consumer is going.”