On Wednesday, Oct. 2, during the NACS Show, moderator Lyle Beckwith, senior vice president, government relations for NACS; and speaker Doug Anderson, president, The We Card Program outlined the latest challenges and solution in tobacco regulation compliance in a session titled, “Retail Under Attack: The Importance of Tobacco Training.” The We Card Program has been around 24 years as a voluntary industry-based program. 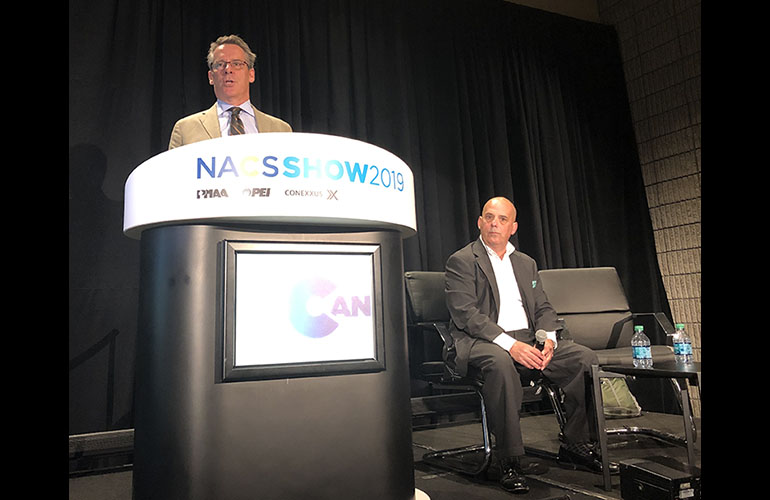 Beckwith pointed out that 25 years ago the c-store industry did a good job on age verification on beer/alcohol, “but we did not do a good job on tobacco. The reason was nobody knew what the laws were. Twenty-five years ago we knew we had a problem. We got together at NACS and came up with We Card.”

At the time, 40% of underage youth were successful in purchasing tobacco from retailers. Once the training was implemented, their success rate buying cigarettes while underage from c-stores fell to the single digits.

But since We Card was first implemented rules have evolved and recently they’ve been changing daily. Denver, for example, just implemented a 21-year-old age restriction on purchasing tobacco yesterday.

The Food and Drug Administration (FDA) has been ramping up tobacco enforcement since 2010. Today, Anderson said, there are nearly 1.1 million compliance checks of all classes of trade of stores. Chains have been called out for poor violation rates. Some 11,976 warning letters were issued in 10 months in FFY 2019, as well as 3,948 civil money penalties. And, if FDA finds a violation they will return and inspect the store in future. If they find another violation fines can go up.

FDA does have guidance on an effective tobacco retail training program.

“What We Card does is it takes FDA guidance and turns it into a training program, taking the (FDA) document into translatable programs for you,” Beckwith said.

It does that for state laws as well.

While we often hear about underage smoking problems in terms of cigarettes, it’s important for c-store retailers to communicate to their staff that it’s not just cigarettes that are being sold to minors.

For example, according to FDA inspection data through July 31, 2019, of illegal sales to minors, 30% were packs of cigarettes, but 41% were cigars and 26% were ENDS/e-liquid. 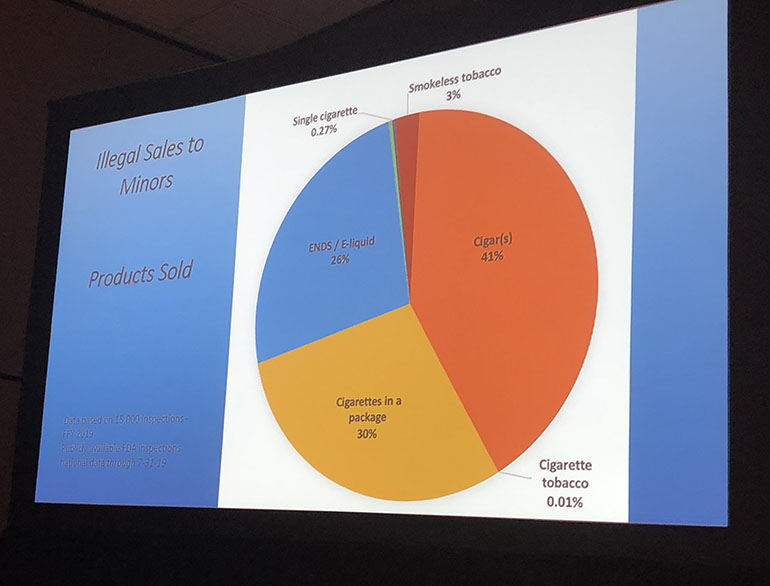 How Do Retailers Respond?
C-store retailers can ensure they’re only selling to legal age adults by training employees, mystery shopping stores, providing job aides — such as are available through the We Card Program — and following best practices.

While having a training program is recommended, it’s not required. Anderson recommended having a written company policy that employees can read and sign as well as a mystery shopping program. Anderson outlined We Card’s range of training courses for different needs, and its tools for helping with age verification.

“We teach customer service as well. You can be compliant without being rude. Politely deny them. If they’re coming in for bottled water or something else, you want them to come in on another day,” Anderson said.

As more states move to 21-and-over age restrictions on tobacco, some also have exceptions for military or are grandfathering it in.

It’s no surprise, the move to 21 age restrictions is causing some issues at checkout. “…You have 18-, 19- and 20- year-old customers, who yesterday were legal customers and today they are not. So we need to create some guidance for associates to deal with that. Most have not grandfathered these in. We have some guidance on how associates should handle it,” Beckwith said.

It’s also important to realize much of the public may not be aware of rule changes and your store could be the first to inform a 20-year-old customer of the new law. “Don’t expect you have an informed public,” Anderson said.

We Card’s A-E-R-O technique can help sidestep potential conflicts with customers:
• Apologize,
• Explain the new law,
• Remove the product from the counter,
• Offer other services.

In some states, it’s illegal for an employee to sell tobacco to an adult if they have reason to believe that adult is giving it to a minor. “If you’ve denied someone (a tobacco sale), and they turn to their of-age friend, hand them the money and say ‘buy this for me,’ you have to deny them,” Anderson explained.

Beckwith explained that 30% of minors reported getting e-cigs from retail and the majority of that 30% is from online or vape shops. “So the c-store industry is doing a good job,” Beckwith said.

But 70% get their cigarettes from social sourcing.

“(Former FDA) Commissioner Scott Gottlieb believed (c-stores) were the source of the social sourcing. … There can be a narrative made that this is coming from legal sales from our stores and being sold to minors. This third-party sourcing could be coming from c-stores even though sales data says it’s not,” Beckwith pointed out.

We Card is launching the Retailer Pledge, where retailers commit to continuing to prevent illegal sales to underage customers as well as denying adult-for-underage person purchases. In return, stores receive a badge and decals for the store to use to communicate and reinforce its values from the top down within the company.  For more information, visit: Wecard.org/thepledge

Beckwith noted,  “Any ingestible CBD product is not approved by the FDA. It’s likely approval will come, but may be age restricted. Same with cannabis. If we want access to these products, we have to maintain our leadership in being responsible retailers.”