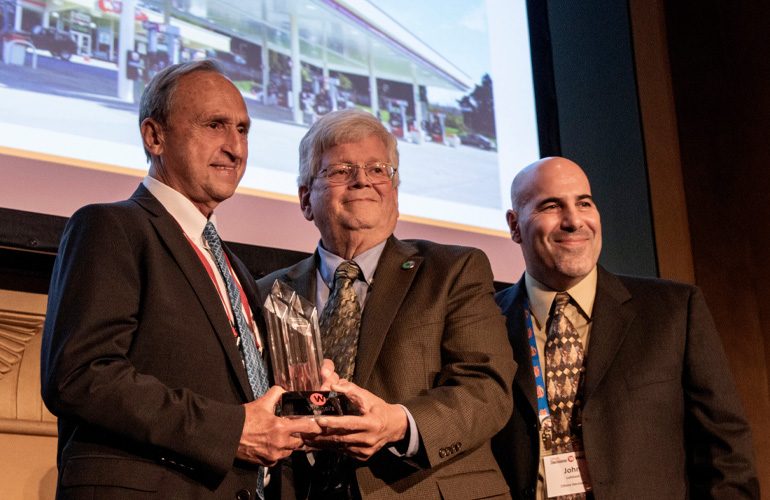 At the Fox Theatre in Atlanta on Oct. 2, CStore Decisions honored Wiegel’s as the 2019 Chain of the Year.

Bill Weigel, Weigel’s chairman, accepted the award on behalf of the company.

For decades, the company has been a respected member of the communities it serves, has built a strong foodservice program and has maintained a pristine reputation as a leading employer in the markets it serves.

Weigel’s, which succeeds Kwik Trip as Chain of the Year, is the 30th winner of this prestigious award, considered the gold standard in convenience retailing.

Other past winners include Rutter’s, Family Express and Nice N Easy.

“While we’re here tonight to honor Weigel’s, this is very much a night to celebrate the tireless work being done by the entire industry to keep America rolling every day,” said CStore Decisions Editor-in-Chief John Lofstock. “Family businesses make this industry what it is today. As long as outstanding companies like Weigel’s continue to thrive, the convenience store industry will continue to soar to new heights.

Lofstock spoke about Weigels’ history, which began in 1931 with William Weigel Sr. as a dairy business with four cows, selling raw milk for nine cents a gallon. Today, Weigel’s operates 64 stores, all within a close radius of corporate headquarters in Powell, Tenn. It employs more than 1,000 people and is now a fifth-generation family business. The company aims to reach 75 stores by the end of 2020.

“During our due diligence phase in selecting this year’s award winner, the one thing that stood out in both talking with folks from Weigel’s and others in the industry was the contagious culture that the company has creates internally that literally permeates out to the customers and service,” said Lofstock. “…as a result, it has some of the most loyal customers in the industry. This close relationship has been nurtured from year to year, from generation to generation, and it’s what makes Weigel’s such a special chain.”

Lofstock spoke about Weigels’ reputation for encouraging and rewarding employees for making a difference in customers’ lives. The company’s golden rules include getting to know customers on a first-name basis and handling any complaints with interest and urgency.

He also highlighted Weigels’ commitment to its community and its numerous charitable efforts over the years, including the annual Weigel’s Family Christmas Program to support families in need during the holiday season. Since 1998, the company has taken more than 4,000 underprivileged kids Christmas shopping, chaperoned by employees and funded by the chain and its many trade partners.

“To receive such a prestigious award, it’s a tremendous honor … made possible by the hard work of over 1,000 Weigel’s team members. They’re committed to providing the shopping experience our customers desire and expect. I like to call them out heroes,” said Bill Weigel. “This is the highest honor our company has ever received. … On behalf of Weigel’s and our team members, I cannot thank you enough. Thank you very much.”