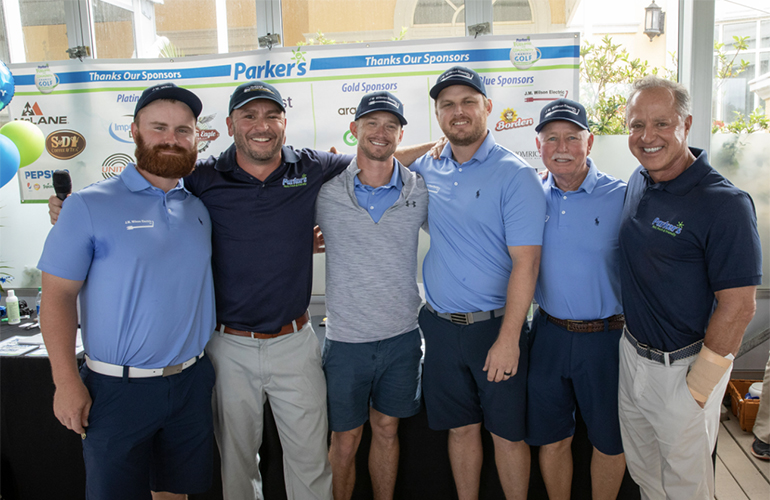 The 8th Annual Parker’s Fueling the Community Golf Tournament, which teed off at The Club at Savannah Harbor in Savannah, Ga., on Oct. 20, raised more than $137,000 to support education and healthcare in communities across coastal Georgia and South Carolina. Parker’s CEO and founder Greg Parker, right, and Parker’s Chief Operating Officer Brandon Hoffman, second from left, congratulated the Wilson Electric team —- including Kevin Wilson, Tyler Wilson, Ryan Wilson and Mike Wilson — on earning second place honors at the tournament.

The eighth annual Parker’s Fueling the Community Golf Tournament raised a record $137,000 to support education and healthcare in coastal Georgia and South Carolina.

All proceeds from the tournament will benefit local communities where Parker’s, CStore Decisions’ 2020 Chain of the Year, operates stores.

The 2020 Parker’s Fueling the Community Golf Tournament attracted 144 registered golfers from across the region, including a number of vendors, suppliers and supporters. A popular raffle included a wide range of prizes, from flat-screen TVs to beach cruisers. Tournament proceeds directly benefit education and healthcare in Georgia and South Carolina communities where Parker’s operates retail stores.

“We appreciate all the support from the sponsors and the players, year after year,” said Parker’s Chief Operating Officer Brandon Hofmann, who organizes the annual Parker’s Fueling the Community Golf Tournament. “This is a tournament that nobody wants to miss. It’s a great experience for a great cause.”

Launched in 2011 with a mission to give back to every community where Parker’s does business, the Parker’s Fueling the Community charitable initiative distributes more than $200,000 annually to public and private schools throughout Georgia and South Carolina.

Through the Fueling the Community charitable giving program, Parker’s donates one cent from the sale of every gallon of gas sold on the first Wednesday of each month at all Parker’s locations to schools across Georgia and South Carolina. The funds raised by the golf tournament will supplement the one-cent Wednesday donations to help Parker’s support education and healthcare initiatives throughout the region.

Deeply engaged with the communities it serves, Parker’s endows the Parker’s Emergency and Trauma Center at Memorial Hospital in Savannah, Ga., and spearheads the Keep Savannah Clean anti-litter campaign. In 2019, Parker’s also donated a record $5 million to create the Parker College of Business at Georgia Southern University.

Headquartered in Savannah, Ga., Parker’s has a commitment to exceeding customer expectations and has repeatedly been recognized as one of the nation’s leading convenience store and food service companies. Parker’s Kitchen, the new food-centric brand under the Parker’s umbrella, serves world-famous hand-breaded Southern Fried Chicken Tenders as well as made-from-scratch mac ‘n’ cheese, a breakfast bar and daily specials. The company’s popular Parker’s Rewards loyalty program, which includes more than 150,000 members, has saved Parker’s customers more than $15 million to date.