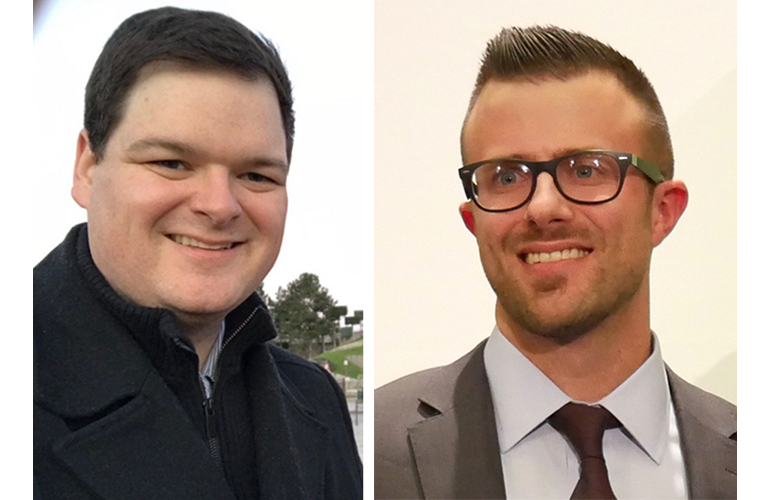 Discussions of disruption often create a perception of all or nothing.

This is of course a false dichotomy as reality is more nuanced. In the near future, the real question facing retailers is ‘Can your business survive if revenue drops by 10-20%?’

Our previous article in the October issue of CStore Decisions introduced the concept of COVID-19 being a dress rehearsal for a future characterized by that level of demand destruction. The concern is that next time, retailers are unlikely to have the advantages of high fuel margins and stock-up behavior.

This column takes a closer look at the challenges coming to both the forecourt and inside the store.

Domestic gasoline demand will be under pressure on numerous fronts in the coming decade. Rather than being hindered by one factor reaching a tipping point, demand will face numerous headwinds. Changing driving habits, internal combustion engine improvements and alternative drivetrains are the primary suspects for fuel retailers to pay attention to as we come out of the COVID-19 malaise. The stagnation in demand over the past decade may well fall into secular decline over the next.

Working from home disrupted the American commute and normalized remote work arrangements. Even as some offices recall their workers, forecasts suggest between one in five and one in six are likely to remain home. A recent University of Chicago study suggested that 37% of jobs can be performed entirely at home.

Add to this the decline in teenage driving habits, the erosion of shopping trips from the right-sizing of America’s over-retailed landscape, and other issues such as the hollowing of America’s middle class, and there exists a negative flywheel working against fuel demand.

A recent report from KPMG forecasts that miles traveled will settle at about 90% of pre-pandemic levels in coming years. Unfortunately, miles traveled is only half of the issue that retailers face. 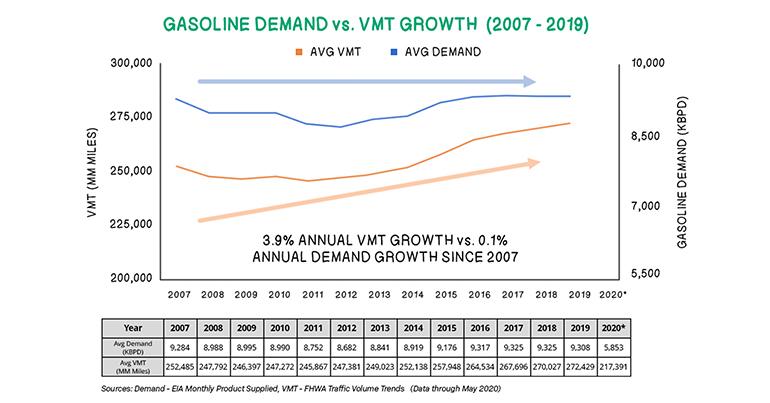 The internal combustion engine is losing its appetite for fuel. Gasoline demand peaked in 2007 and has leveled off, despite population growth and increased SUV sales. Fuel economy improvements are a major driver of this trend. As noted in a recent Fuels Institute report, the U.S. Energy Information Administration (EIA) forecasted a 47% improvement in light-duty fleet economy by 2040. Diesel is estimated to experience a 30% improvement. Of course, fuel efficiency is only relevant if consumers need liquid fuels in the first place.

Adoption scenarios for electric vehicles (EVs) remain subjects of debate, but EVs are set to present another challenge, too, beyond implementation. Simply put: Chargers are not a 1:1 replacement for fuel pumps. Many motorists will charge at home and begin each day with a “full tank.” Others will charge at work.

A 2016 survey of drivers in Norway, the world’s most advanced EV market, found that only about 10% of battery electric vehicle (BEV) owners use public chargers on a weekly basis. This may reflect early adopters who have access to home charging, but keep in mind today’s average range of around 200 miles is nearly seven times the daily distance traveled by the American motorist.

Retailers will also find dilution of their value proposition as the barrier to entry for charging is much lower than for fuel pumps. Cost, environmental concerns and product supply are non-issues. Movie theaters, restaurants and most other businesses can lure customers away with chargers. It can even be argued that their offers are more compatible with an EV customer’s needs as charging takes longer than fueling.

Most concerning is that the merchant-backed retailers of the world are likely to be early adopters and offer discounted charging to their membership programs. Retailers along highways may pick up business from travelers, but it’s unlikely that neighborhood convenience stores will ever find strong demand.

Going forward, organic fuel growth will only get more expensive as competition heats up for bigger slices of the shrinking pie. EV adoption will further fragment the traditional customer base. This is why it’s essential to win with a differentiated in-store offer that’s capable of driving traffic on its own.

Although it’s accurate to say the retail apocalypse bypassed convenience retail, the statement is also misleading. Our struggling malls never sold an essential product like gasoline. For many retailers, the convenience they provide is a function of having a captive audience at the forecourt. If fuel demand drops, a decline in in-store transactions will follow.

This will happen amid growing competition and channel blurring in retail’s last mile. Delivery removes the need to even visit a c-store. While retailers took a “wait and see” approach in recent years, goPuff expanded across America and met this new demand. A recent fundraising round valued the delivery app at $3.9 billion. Third parties have also gained momentum and are conditioning consumers to make decisions within the confines of their platforms.

This is concerning. Continued growth of third-party delivery creates a powerful incentive to partner in order to access its audiences, but the costs include high fees, middlemen and a lack of control. There is also the risk that they might follow Amazon’s lead and use partner data to deploy competing solutions. Indeed, DoorDash now competes against its partners with the DashMart brand.

Many convenience retailers have leveraged foodservice as a way to drive traffic to their stores. Unfortunately, competition will continue to be stiff from national quick-service restaurant (QSR) chains like McDonald’s. Pre-COVID investments in drive-throughs and off-premises solutions enabled them to thrive while the pandemic devastated their independent and casual dining competitors. Continued development in these areas will only widen the gap. Indeed, it is now possible to order Panera delivery or curbside pickup directly through Google Maps.

Dollar stores will also bring continued competition. Not only does the channel thrive during times of economic downturn, but Dollar General in particular is investing in cold storage and self-distribution. This will help transform the average “treasure hunt” experience into something more fresh and relevant.

To be fair, convenience retailers have many advantages of their own. All of this is to say that now is the time to be vigilant.

In our third and final piece — coming next month — we will examine a few gaps, opportunities for c-stores to respond and potential solutions. CSD