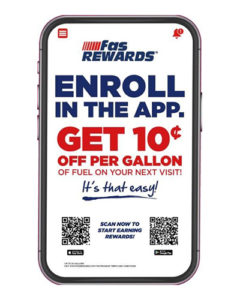 The new fas REWARDS program allows customers to earn up to 4% in loyalty points, double the current 2% level, and has enhanced communications with customers based on personal information and shopping behaviors.

The enhanced fas REWARDS program rolled out in the vast majority of GPM stores on Nov. 4 and will available in all locations by Q1 2021, including retail stores acquired in the recent Empire Petroleum acquisition.

“We are constantly looking for ways to bring value to our customers and to thank them for shopping at one of our over 1,350 stores,” said Arie Kotler, CEO of GPM. “fas REWARDS does just that when customers shop our stores, earn points, and redeem their fas BUCKS.”

Enrollment is simple using the updated fas REWARDS app. When a customer joins, they are immediately rewarded with 10 cents off per gallon of fuel, up to 20 gallons.

In addition to the enrollment reward, enhancements include:

GPM was founded in 2003 with 169 stores and has grown through acquisitions to become the 7th largest convenience store chain in the United States, with, following the recent consummation of the Empire acquisition, 2,930 locations comprised of 1,350 company-operated stores and 1,580 dealer sites to which it supplies fuel, in 33 states and Washington D.C.