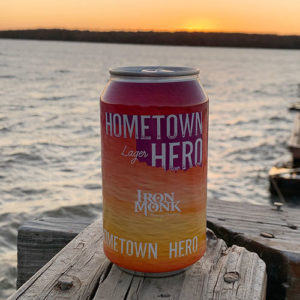 “This new collaboration holds a special place in all of our hearts as we face insurmountably hard times across our country,” said Kim Cuellar, OnCue category manager of beer and wine. “Everyone has someone they think of when they hear ‘hometown hero,’ and the holidays make this the perfect time to recognize those individuals as we give thanks.”

The beer is also crafted in part to honor OnCue and Iron Monks’ shared hometown of Stillwater, Okla.

“We were honored when OnCue approached us about collaborating on this beer,” said Dave Monks, cofounder of Iron Monk.

Jerod Millirons, Iron Monk’s other co-founder, added “relationships mean everything to us, and our relationship with the Stillwater community and OnCue has been a huge part of our success. We hope everyone enjoys the results of our collaborative effort. Cheers to all of our Hometown Heroes!”

Hometown Hero is a light-bodied lager brewed using the choicest hops and malted barley to give a crisp well-balanced flavor. The six-packs will be in stores at OnCue locations while supplies last.

OnCue is a growing innovator in the Oklahoma convenience store market. Founded in 1966, we have expanded to more than 75 locations today and employ over 1,200 Oklahomans.