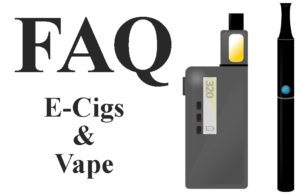 Well, let’s start with what those two non-combustible “smoking” products have in common. Both usually operate by heating a liquid gel – or e-juice, as it’s often called – that vaporizes the substance which the user then inhales, delivering nicotine through the lungs.

An e-cigarette, though, is indeed the traditional cigarette lookalike – they’re often called “cigalikes” – that resembles a fountain pen more than a cigarette.

E-cigarettes heat the liquid, which is typically contained in a disposable cartridge or pod. The pod can contain various e-juice flavors and nicotine levels for users to choose. Some e-cigs are known as heat-not-burn devices. Instead of using a gel, they warm a tobacco product that emits the vapor to be inhaled.

An e-cigarette is smaller, lighter, more convenient and more discreet than a vape system.

Vape systems can rightfully be called a step up from e-cigs. They are characterized by greater heating power, larger vaporizer units and greater flexibility in varying the amount of flavor and nicotine intensity.

They work in much the same way as an e-cigarette in that a power source charges a heating element that in turn vaporizes the e-liquid in the device. However, unlike e-cigs, vaporizers use a tank to hold the e-liquid rather than a cartridge.

Vape systems – often called mods – hold considerably more e-juice than a pod. Dials let users adjust the mix of liquid, heat and vapor levels. As the vape tank gets low or should you decide to partake of a different flavor, you simply add additional e-liquid of the newly chosen flavor and nicotine strength of your choice into the vape tank.

Why would a consumer choose one over the other? Many reasons. Vape mods come in many sizes and forms, many having artistic or aesthetic qualities that give the owner a sense of personal expression – much like a flask or cigarette case of old. And for those who prefer e-cigarettes, the age-old practice of holding and feeling a cigarette in your hand is as much a part of the smoking experience as inhaling the product.