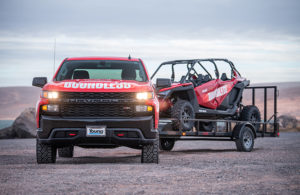 Convenience store chain Maverik, has announced its “Boundless” 2021 Grand Sweepstakes, presented by Coca-Cola, which is running now through Nov. 16.

Maverik customers across the 11 Western states, where Maverik operators its 360+ convenience stores, can turn loyal visits into adventure prizes.

One lucky winner will be randomly selected to win the Grand Prize of a 2021 Chevrolet Silverado 1500, 2021 Polaris RZR with a trailer and a Coca-Cola swag bag. Three runner-up finalists will win one year of Coca-Cola products valued at $500, a $500 Maverik gift card, and a Coca-Cola swag bag. The four finalists will be drawn throughout the sweepstakes, and the final event will culminate in Salt Lake City in December for a random selection of the Grand Prize winner.

Guests can win by entering Trail Points through their Maverik loyalty account and bonus entries will be awarded for purchasing select Coca-Cola products at Maverik convenience store locations.

“Boundless is our 9th annual sweepstakes celebrating adventure and offering yet another way to fuel our guest’s most exciting journeys,” said Ann Argust, senior director of marketing at Maverik. “It’s so rewarding each year to meet our loyal winners from all across the western states and learn what they love about Maverik and where they plan to adventure next with their new prizes.”

The Grand Sweepstakes is part of Maverik’s ongoing series of sweepstakes in partnership with popular brands to offer customers adventure-themed prizes throughout the year. In 2020, Maverik’s series included 13 total sweepstakes, 36 prized winners across seven states, 59 adventure-themed prizes totaling over $375,000 and eight brands represented in partnerships.

To begin earning Trail Points to use for future Maverik sweepstakes, customers can join the Adventure Club by downloading Maverik’s digital app.