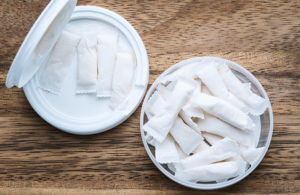 The overall tobacco category long has been a primary profit driver for convenience stores, but for years, there was limited product innovation. Then along came electronic nicotine delivery systems (ENDS) such as e-cigarettes and vaping devices. Whereas ENDS offer combustible cigarette smokers an alternative experience, they don’t serve as a comparable substitute for smokeless tobacco users. For these consumers, the most interesting changes to the subcategory came in the form of new flavor combinations.

In 2015, though, retailers in Colorado began stocking ZYN by Swedish Match, the first product to be classified as a modern oral nicotine pouch sold in the U.S. Also that year, Burger Söhne Holding AG released On! pouches (Altria Group later agreed to acquire 80% of the Swiss company).

Like snus, users place the modern oral nicotine pouch between their gums and cheeks or lips. Unlike snus, which contain traditional moist chewing tobacco, modern oral nicotine pouches are tobacco-free and spitless. Instead, the pouches only hold nicotine, which has been extracted from tobacco plants, crystallized into nicotine salts that are combined with sweeteners and natural flavors. Their “cleaner” appearance is why these pouches are also called all white tobacco.

The pouch measures about the same size as snus. And while these pouches contain nicotine like ENDS, they do not operate off battery or vaporize the nicotine as done by e-cigarettes and vaporizers. Consumer feedback suggests the nicotine sensation lasts approximately 20 to 30 minutes.

Modern oral nicotine pouches are sold with varying levels of nicotine, ranging from one milligram up to eight milligrams. Like their smokeless tobacco cousins, most pouches are packaged in cans and offered in standard flavors, including spearmint and wintergreen. Some brands also sell more unique tastes such as cinnamon, coffee, citrus and berry.

The Food and Drug Administration (FDA) still considers modern oral nicotine pouches as tobacco products because the nicotine is derived from tobacco plants. Therefore, it regulates the product segment, including mandating package warnings about the addictive nature of nicotine.

By 2019, it was carried nationwide and joined by several new brands of oral nicotine pouches. Although research indicates moist chew continued to outsell pouches in total dollar sales during this time, the newer subcategory logged far greater percentage gains in both dollar and unit sales, showing its profit potential.

Plus, if the FDA awards these types of pouches a reduced risk status, which already was granted to several snus, then their market share could grow further because they can be promoted as a less risky alternative to traditional smokeless tobacco products.