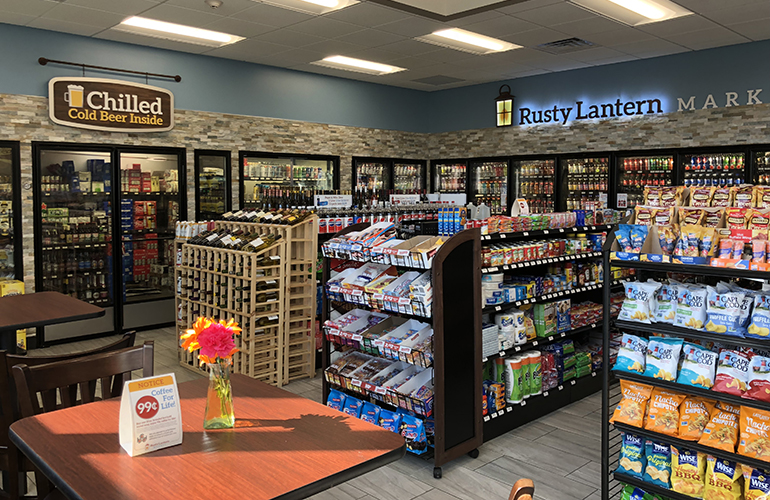 In 2021, the chain plans to continue refining its interior design and extend its design theme to the exterior of the stores, while also continuing to expand its footprint.

Rusty Lantern’s mission is to elevate customers’ perceptions of what a convenience store can be. From its local products to its outdoor gathering areas, Rusty Lantern cultivates an environment that serves as a local gathering spot for friends and neighbors in the community.

Founded in October 2015 by CEO John Koch, the chain grew quickly in its first year, opening three convenience stores in the state of Maine in close succession, including a new build in Portland and acquisitions in Topsham and Brunswick. 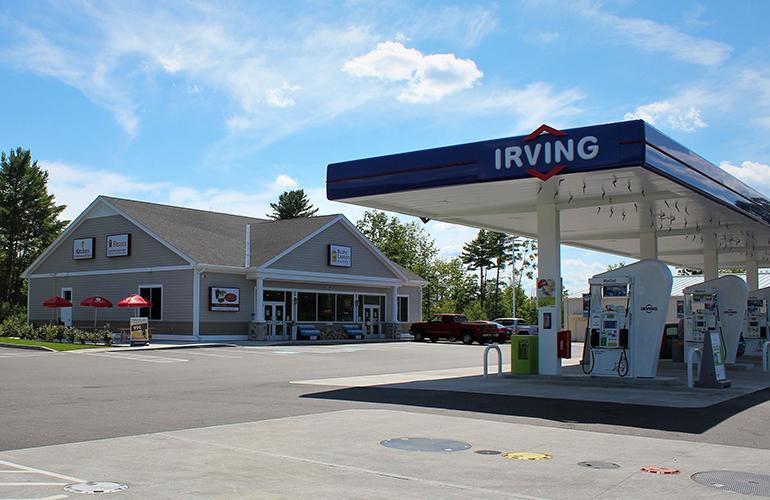 Koch had previously worked for a major oil company and for a wholesaler and was ready to try his hand at the c-store business. One of his first steps was to bring in design firm Paragon Solutions to help develop a brand, interior layout and design strategy for the new chain. In explaining his vision to Paragon Solutions for a convenience store that is also a neighborly gathering spot, Koch pointed to the back porch at his home where friends often gathered. The back porch has a rusty lantern, and friends began referring to get-togethers there as being at “the rusty lantern.” Out of that conversation, the name Rusty Lantern Markets came to life as a moniker for the new c-store chain.

Paragon carried the rusty lantern concept into the interior design of the stores, using it to inform color and material selections. The convenience store interiors feature a deep rusty red color as well as a pale blue and beige color scheme.

“We brought in some stonework, primarily around the cooler areas. It’s a beige, brown stone, and the cabinets are a dark chocolate brown,” Koch said. 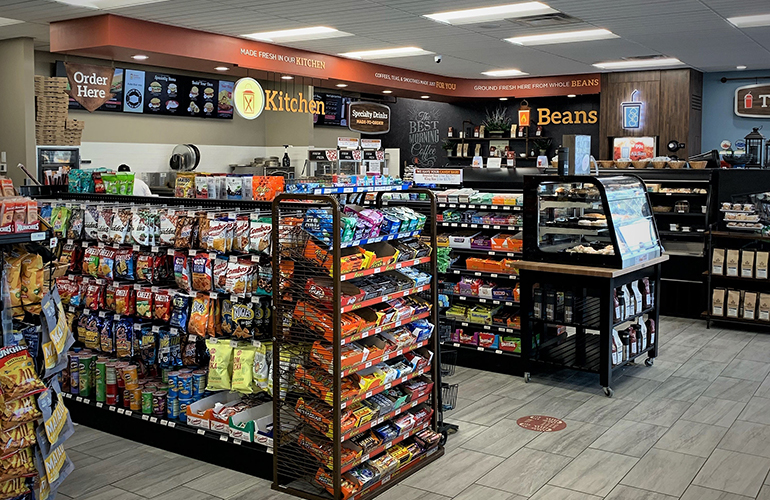 While the design has evolved since 2015, the color scheme and concept have remained, and the interior graphics incorporate the lantern theme throughout the convenience store.

“We’ll call out the beer cave with a graphic suspended from the wall using a rusty-looking guardrail material, suspending the graphic,” Koch said. “We highlight the coolers with an LED lantern. The kitchens have a suspended kitchen lantern graphic with a little fork and knife inside the lantern instead of the flame. We include the word ‘beans’ and a little logo work with graphics to elevate the coffee area.”

Rusty Lantern opened its most recent new-to-industry store in Brockton, Mass., in July 2020. And in October, it acquired two existing sites, which are being remodeled to incorporate the Rusty Lantern branding and design this month and set to be completed by the end of April.

“You could go into the first rebuild five years ago, and it’ll look very similar to the most recent one we built in July,” Koch said. The biggest difference in newer locations is the layout, which has transitioned over time both to accommodate the physical limitations of some buildings and to allow space for the 1,000-1,500-square-foot kitchens it’s incorporating into new builds. 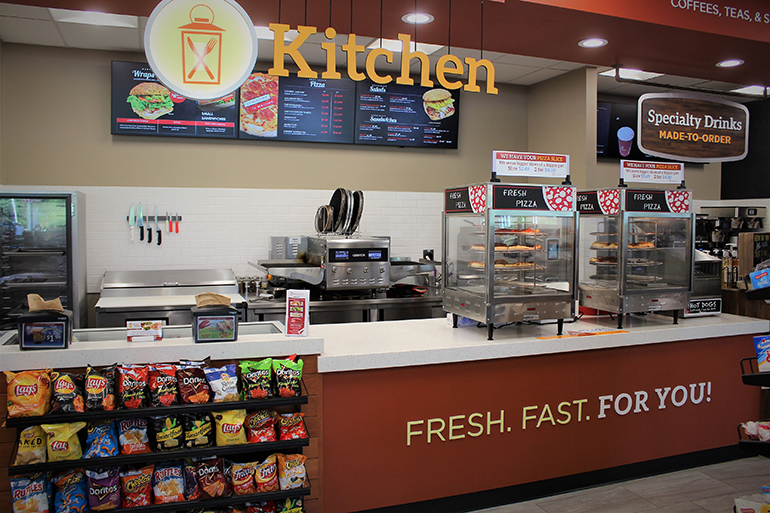 “We’ve moved the checkout area around to make it more conducive to the work with the kitchen,” Koch said. “We’ve expanded the footprint of the kitchen and extended the beverage cooler footprint.”

Rusty Lantern stores range from 4,000 to 4,600 square feet and are well lit to ensure a feeling of safety. The forecourts fly the Irving fuel flag, except for one of its original sites that features Shell-branded fuel. Due to property restrictions, not all locations include the original outdoor gathering area that spurred the idea for the rusty lantern concept and name, but many of the sites feature an outdoor gazebo complete with furniture where locals often gather for a cup of coffee.

Inside, restrooms incorporate modern touches as well as fresh flowers for added ambiance.

In keeping with its positioning as the neighborhood gathering place, Rusty Lantern puts a big emphasis on stocking local products.

“Our coffee is from a company called Coffee By Design, out of Portland, Maine. They’re a micro gourmet roaster,” Koch said. “We buy the fresh food from local vendors, where we can. We bring in bakery and confectionary, honey and snack products from local Maine-based companies.” 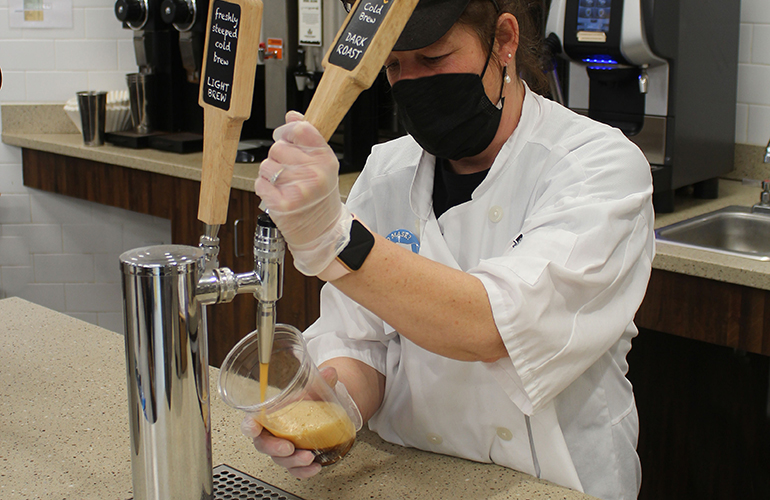 The local products are featured in a special ‘Made in Maine’ section inside the store. Also unique, the chain offers a candy section for kids that sells individual pieces of candy — “with old drug stores in mind.”

Rusty Lantern sees a high demand for craft beer in the areas it serves and has increased its focus on local craft beer in its coolers and beer caves.

“Most of the new builds include beer caves, with a double-door entrance and extra lighting,” Koch said. The title floor from the c-store extends into the beer cave and speakers play music inside the cave.

“Everything’s made fresh and prepared on-site. We hand-toss the pizza dough. We crack every egg, all the coffee’s ground fresh from beans before it’s brewed,” Koch said. “We have hot and cold grab-and-go, as well as a made-to-order counter.”

Lunch includes a range of options such as “Cubans and Rubens and what we call a New Englander, which is a Turkey and cranberry sandwich,” Koch said. Lobster rolls are also on the menu. 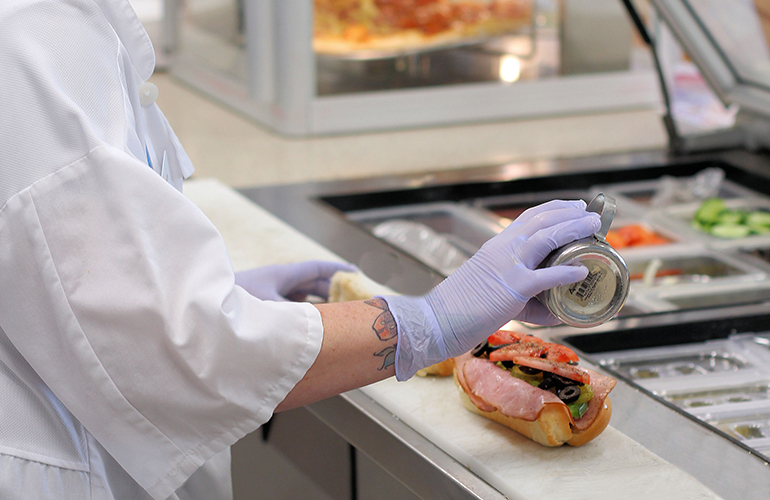 The employees preparing the food don white chef jackets. The chain also features baristas who prepare specialty coffee drinks. And it sells take-home bags of the Coffee By Design coffee.

Each store includes a small sitting area with tables and seating for six to 12 customers. And tables feature a vase with fresh flowers to welcome guests.

In 2021, Rusty Lantern plans to determine the best way to extend its interior brand design to the exterior. Currently, the chain features two types of building exteriors. 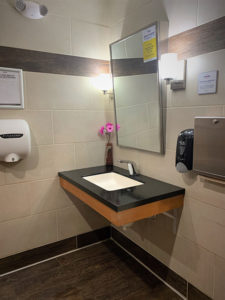 “One is a New England Colonial-type that incorporates some stonework. The other is a little more modern, with double high ceilings and extra (windows),” Koch said.

In determining a new exterior look, Rusty Lantern plans to keep the same basic colors and materials it has now, but also ensure a modern appearance that better fits its brand identity.

Also ahead for 2021, Koch plans to continue to refine the interior design, further highlighting the food and beverage areas through
additional branding.

To date, Rusty Lantern Markets has grown at a speed that superseded what Koch originally imagined. He credits a number of unexpected opportunities, including the ability to acquire some sites from fuel-supplier Irving Oil, but noted the biggest factor has been the efforts of the hard-working Rusty Lantern team.

“The key to our fast growth is our extremely dedicated and professional team members. Our people are very loyal, and they take a great deal of pride in delivering an excellent experience for our customers,” Koch said. “It’s difficult work, but we have a team of people who are willing to put in the time and energy in order to be the best.”

“Acquisitions are a nice way to balance your growth. An acquisition is nice because there’s a history there. It gives you confidence in what the store can produce right away,” Koch said.

Koch noted he always has confidence in the potential of new-to-industry Rusty Lantern locations but added there’s always a startup curve to a newly built site. “So it’s nice to have a little balance of acquisitions and new builds, but we do tend to favor the new builds.”

As for what the next five years hold, Koch envisions building one to two new stores per year.

“People laugh because when I first started, I told people we’d open five (stores), and now we’re at 18,” he said. “Every time I make a prediction on what the future holds, it’s a little bit of an inside joke because nobody really knows for sure. It just depends on what opportunity comes our way.”