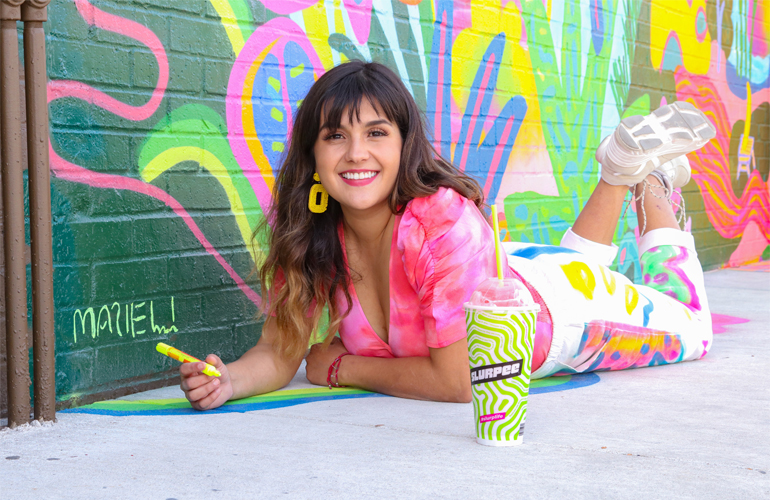 Irving, Texas-based 7-Eleven is making a big, colorful splash in neighborhoods across the U.S., commissioning local mural artists to bring its creative vision to life at select stores.

The convenience retailer has teamed up with The Ammersion Group, a new Dallas-based creative agency, to identify acclaimed artists to create neighborhood-specific murals on interior and exterior walls of existing and new 7-Eleven stores.

The goal of the mural program is to capture each neighborhood’s energy through inclusive on-site murals in order to bring connection and creativity to local communities. 7-Eleven first embarked on the massive art project in Dallas, the company’s hometown.

“We kicked off our mural program with a local artist at a new 7-Eleven Evolution Store, an experiential testing ground where we test new concepts, products and services before we scale them across the 7-Eleven system,” said 7-Eleven Senior Vice President and Chief Marketing Officer Marissa Jarratt. “It’s been a hit so far and I’ve seen my fair share of excited customers stop what they’re doing to take Instagram-worthy photos in front of the larger-than-life mural. This positive customer behavior and feedback has encouraged us to expand the concept to more stores in 2021.”

7-Eleven selected painter and illustrator Mariell Guzman to capture the essence of the neighborhood. Born in Michoacán, Mexico, Guzman pulls from her Mexican heritage to create murals with a vibrant color palette and whimsical gaze. Guzman wanted to bring the rich heritage of her native homeland to the community where she works and creates.

“Creating a mural for 7-Eleven in my very own neighborhood was a true honor and a privilege,” Guzman said. “I’m very grateful to The Ammersion Group for believing in my work and connecting me with the 7-Eleven team to create a new landmark for the Lake Highlands community.”

Two more bold mixed media murals have already been painted by portrait artist Brandon Adams at the Southside store on South Lamar and, most recently, graffiti artist and a leader in the local arts scene Tex Moton at a yet-to-open store on Park Lane and Abrams, also in East Dallas.

The genesis of the effort was born through a visionary collaboration between 7-Eleven and The Ammersion Group, working under the umbrella of “Artists Building Brands.” Bringing communities together has never been more important, which is why 7-Eleven directly engaged the North Texas arts community and plans to do the same in other U.S. cities. This project embraces community beautification by connecting the fine art and marketing worlds, while also mentoring and supporting creatives of all backgrounds and communities.

North Texans can expect to see more impactful murals pop up throughout 2021 at 7-Eleven stores, partnered with The Ammersion Group utilizing their deep connections to and relationships within the Dallas art community. Both emerging and established artists will be invited to bring their artistic vision to their neighborhood 7-Eleven store.

7-Eleven operates, franchises and/or licenses more than 72,800 stores in 17 countries, including 12,000 in North America.