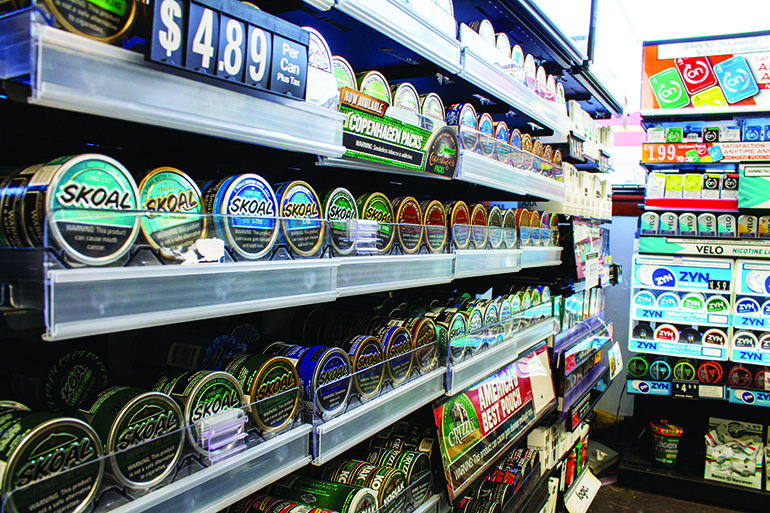 For many convenience stores, the overall tobacco category delivered a welcomed lift for in-store sales, albeit surprising during a historic public health crisis. Many of the subcategories performed well, but none posted as impressive figures as the smokeless tobacco sector, specifically spitless tobacco products, such as modern oral nicotine pouches.

According to IRI data, chewing tobacco still collected the larger share of total dollars, in excess of $7.1 billion, but spitless tobacco products posted substantially greater growth percentages for the calendar year ending Dec. 27, 2020 — approximately 67% in each dollar and unit sales.

Some of this can be credited to a growing awareness of nicotine pouches. By this time last year, Swedish Match’s ZYN had reached 80,000 stores in the U.S., and R.J. Reynolds Vapor Co.’s Velo and the Altria Group’s On! have fueled competition. Smaller boutique brands are wanting in on the hot market, too.

“Nicotine pouches are taking right off. It certainly exceeded my expectations in terms of sales of the product,” said Doug Galli, vice president and general manager for Reid Stores and Crosby’s, which operates more than 80 sites in New York and Pennsylvania.

“The data showed that spitless products deserved more share, so we made the change (to include more spitless items) for the benefit of the whole category. The additional space for spitless did not come from sacrificing chew, but rather was the result of a government ban on vape flavors in early 2020,” said Adam Long, senior category manager for Rutter’s, who oversees tobacco products for Rutter’s more than 75 stores in Pennsylvania, West Virginia and Maryland.

“Oral nicotine pouches have gained share as consumers continue to evolve. Part of that evolution is a growing desire to move through the harm-reduction spectrum to products that will deliver nicotine satisfaction, but with less perceived risk of harm,” he added.

Yet again, though, regulations threaten to slow momentum this year.

“While vaping is capturing all of the attention, laws are being proposed that would sweep all tobacco and nicotine products under flavor bans — even products that are granted a modified risk order from the Food and Drug Administration,” said Alex Clark, CEO for Consumer Advocates for Smoke-Free Alternatives Association (CASAA), a nonprofit advocacy organization for consumers seeking reduced-harm tobacco products.

Indeed, Connecticut and Maryland are the latest to introduce legislation proposing to ban all flavored tobacco options, including menthol. New York, New Jersey and Rhode Island have already banned flavored e-cigarettes and vaping options, but also new bills plan to add menthol, which would affect smokeless tobacco, too.