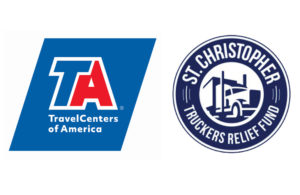 Westlake, Ohio-based TravelCenters of America has donated $24,960 to the St. Christopher Truckers Relief Fund (SCF) as part of a candy promotion with World’s Finest Chocolate (WFC).

In February, customers visiting TA’s travel stores had the opportunity to purchase a WFC candy bar at the registers, with a portion of the proceeds going to SCF, a nonprofit offering financial assistance to ill or injured professional drivers and health and wellness programs.

“We’re pleased to offer this donation to the St. Christopher Trucker’s Relief Fund,” said Barry Richards, president of TA. “We’re grateful for the millions of professional drivers who are the backbone of the trucking industry and will continue doing what we can to support such an important organization.”

Donna Kennedy, executive director of SCF, added that it is important to have major organizations embedded in the trucking industry that are always thinking about how they can help drivers.

“TravelCenters of America is a consistent supporter of ours and we’re so grateful for their creativity and commitment to further our mission,” she said.

TA began its support of SCF in 2010 and has since raised nearly $3 million for the organization.

The St. Christopher Truckers Development and Relief Fund (SCF) is a 501(c)(3), truck driver charity that helps over-the-road/regional semi-truck drivers and their families when an illness or injury, occurring within the last year, has caused them to be out of work. The SCF is also working to provide programs that will benefit professional drivers and the trucking industry.