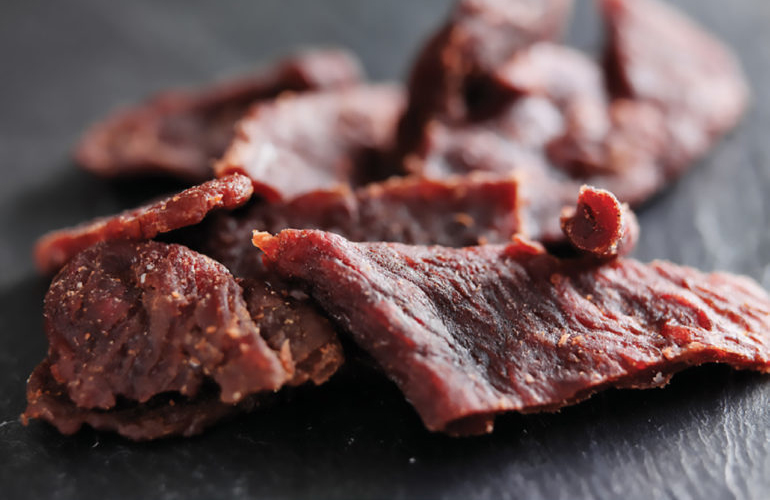 Beef jerky (or ch’arki as it was first called) can trace its history as far back as the 1500s when the Quechua, part of the Incan Empire in South America, began preserving meat by drying it at low temperatures to prevent it from spoiling.

Today, Americans still count on dried meat with its portability and density of protein and other nutrients, to fuel their active lifestyles and quell hunger pangs at and beyond mealtime. And many are buying those meat snacks at their local convenience store.

Beef jerky sticks have always been top sellers, but over the years a diversity of forms and flavors in the meat snacks category have come into the marketplace. Strips, steaks and bites as well as sticks have gone far beyond beef to include meats ranging from chicken and turkey to wild game such as elk, boar, bison and ostrich.

Flavors range from sweet barbecue to spicy sriracha to savory teriyaki. New flavors are constantly being introduced, making the category one of the most dynamic in the store.

Not so long ago, meat snacks were viewed as middle-age man food, rugged in both flavor and texture. But with the availability of more refined, more tender forms and upscale flavors, they have gained a loyal following of women as well. Younger consumers have also adopted meat snacks as a “better-for-you” between-meal pick-me-up.

Convenience stores are regarded by many consumers as a destination for meat snacks, so it is important to offer a variety of forms, flavors and brands in several strategically selected areas including the hot and cold dispensed beverages areas and near the coolers and beer cave. New varieties can be introduced as limited time offers to keep consumer engagement high and gauge whether a product should earn a permanent place in the meat snacks mix.

In addition to single-serving sticks, meat snacks are also available in shareable bags. These larger sizes provide the perfect opportunity to upsell to a higher ring.