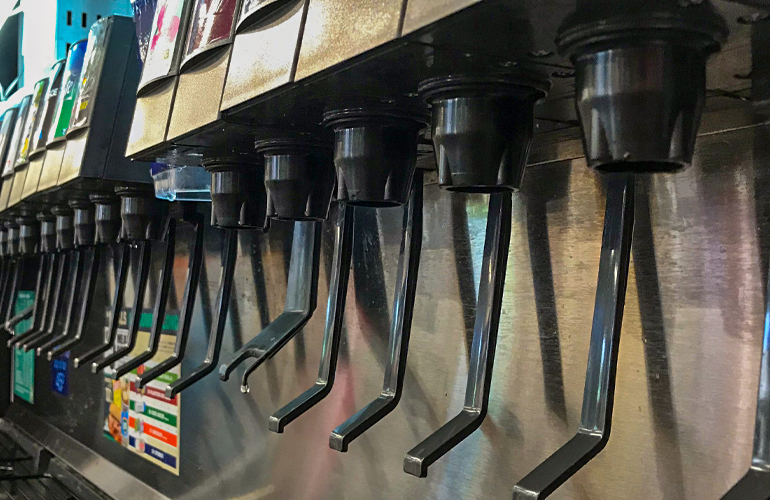 Around this time last year, as the COVID-19 pandemic arrived, c-store retailers found themselves scrambling to implement changes to keep dispensed beverage sales flowing, despite local lockdown orders. Now, many locations are again making adjustments as rules and regulations ease.

As county, city and state regulations have relaxed, the stores, with more than 750 locations spanning 44 states and five Canadian provinces, have transitioned back to the self-serve model.

“Our cold and frozen dispensed beverage sales are recovering,” King said. “With the warmer weather and travel season approaching and as more research emerges from respected health sources about low transmission rates through surfaces, we anticipate greater use of self-serve equipment, especially with increased sanitation protocols in place.”

To encourage sales in this category over the next few months, the company’s offering incentives such as free drink offers for those who download the Pilot Flying J app and are among the rotation of daily deals for existing app users. The stores will also recognize customers with special promotions such as Driver Appreciation Month in September with a suite of offers, including free drinks.

Not having to close down their self-serve areas during the pandemic allowed cold and frozen dispensed beverage sales to remain relatively consistent at Cubby’s convenience stores’ 37 locations in Nebraska, Iowa and South Dakota, according to De Lone Wilson, the company’s president.

Anticipating more growth in the category as temperatures rise and more vaccines are distributed, Wilson plans to expand the fountain’s presence in some of his stores by adding more heads and variety. A Memorial Day through Labor Day discount on a 32-ounce drink has been a sales-builder for Cubby’s for the past five years and is on tap to run again this summer.

Despite the temporary closing of the cold and frozen dispensed beverage areas according to COVID-19 guidelines in its Alabama stores, Southwest Georgia Oil Co.’s SunStop Markets posted a year-over-year 29% increase in category sales as of February, said Director of Food Service Michelle Weckstein. The Bainbridge, Ga.-based company operates 80 locations in Georgia, Florida and Alabama.

For the past year and a half, the company has been working with a graphic design firm to create a more spacious and user-friendly area for its self-serve beverages. As part of this reimaging, it is also purchasing more fountain and nugget ice machines.

Three months ago, the company began testing a new iced tea brewer that uses IoT (Internet of Things) technology in Florida. The equipment makes data about usage, inventory and when cleaning or maintenance are required accessible anytime.

“The new equipment helps ensure product freshness, provides touchless dispensing for our guests and has easy-to-clean spouts for our crew,” Weckstein said. “Customers love it, and we plan to roll out the units to all our stores in early April.”

To support the introduction of a new loyalty card, the stores will be running several promotions starting in May. The first is an Icee Club and Fountain Club offer of a free beverage with the purchase of nine. All customers can participate in a “one for now, one for later” promotion that pairs a fountain beverage with a packaged beverage at a special price.

RaceWay, which operates 205 locations in 11 states, has had impressive results with the addition of a Coca-Cola Freestyle machine to its cold and dispensed beverage offerings, said Jourdan Clements, RaceWay’s director of operations. The stores use the countertop model, undergoing a phased rollout, which gives consumers the choice of customizing their beverage from a selection of 60-plus carbonated and non-carbonated selections.

Clements called the Freestyle machine “a great driver of traffic.”

“It is a comprehensive and turnkey program for our franchisees and delivers a consistent product from store to store,” he added. “A single fountainhead instead of the usual multiple heads also makes the machine much easier to clean and flavor cartridges instead of bags-in-boxes take up less space in inventory.”

Data from a poll by market research firm CivicScience revealed a “negligible change” in the percentage of consumers who reported purchasing cold or frozen dispensed beverages from convenience stores/gas stations between Jan. 24, 2020, and March 16, 2021. Age data for both kinds of beverages showed the greatest favorability among 35- to 54-year-olds.