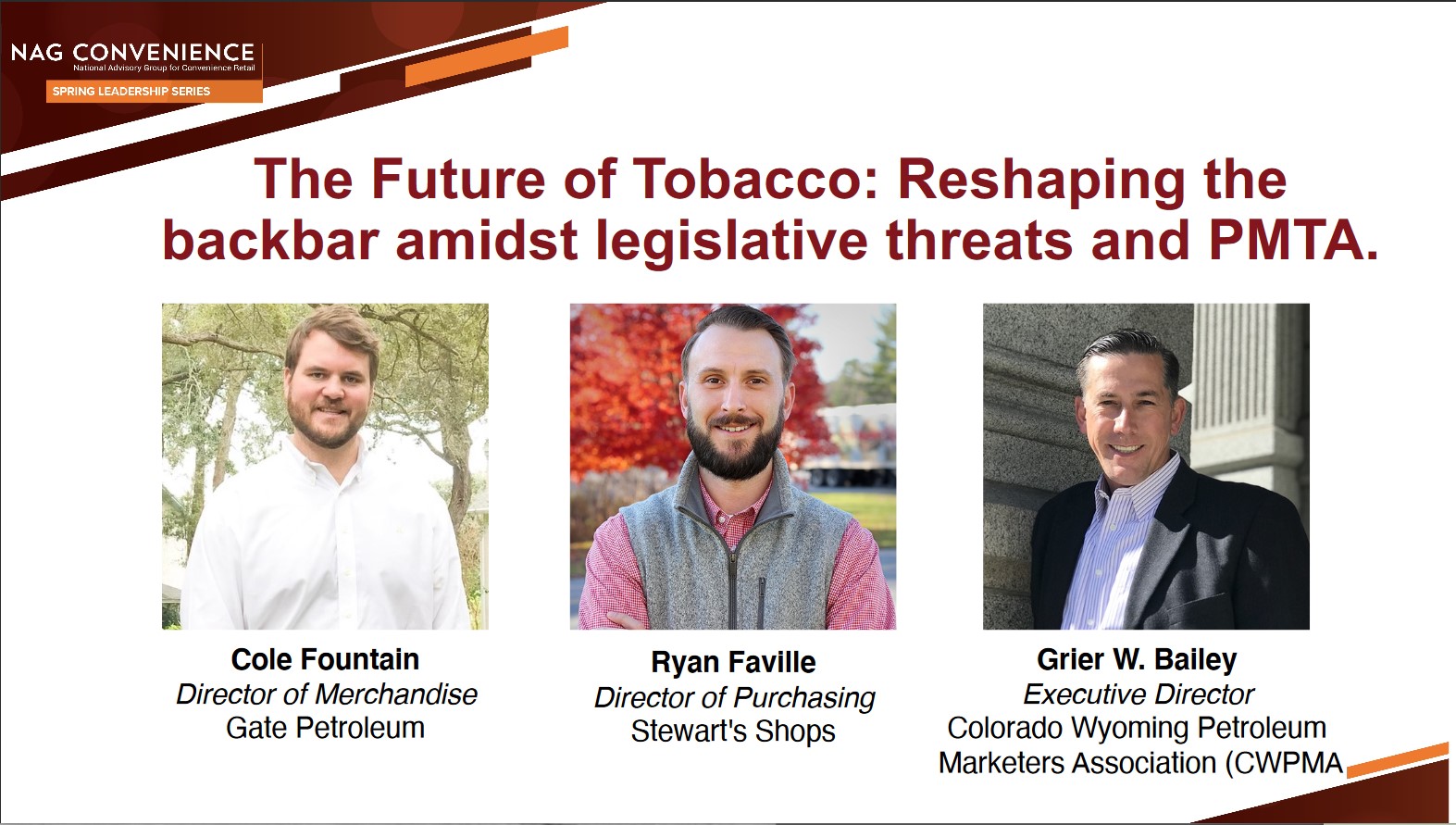 The National Advisory Group and Young Executives Organization Spring Leadership Series continued on June 2, with the third of five virtual sessions. The three panelists – two retailers and a legislative expert – tackled the session’s topic, “The Future of Tobacco: Reshaping the backbar amidst legislative threats and PMTA.”

The session started with a slide presentation and commentary from Bailey titled “Advocacy Goals and Considerations for Responsible Operators.” Bailey’s remarks provided virtual attendees with a snapshot of what it’s like to lobby lawmakers.

Bailey addressed the differing levels of government involvement in the tobacco marketplace – from to federal government’s Pre-market Tobacco Authorization (PMTA) to the differing standards at the state and local levels.

Bailey advised retailers to be involved with the legislative decision-making process – not just on tobacco issues, but across the policy spectrum. Engagement on tobacco issues, he warned, should not be the first time a retailer reaches out to an elected official.

As a lobbyist on behalf of the Colorado and Wyoming tobacco retailers, Bailey said that he lets legislators know that he’s there to help; to approach every conversation with political integrity. That he’s interested in solving issues and overcoming hurdles.

“It is much better to be proactive in this space than to be reactive,” Bailey advised.

He noted that it’s important to keep in mind that the legislators have more than just your issue on their plates. The problem with finding common ground on regulatory issues is not the legislators themselves.

“I’ve not met a single person who was ever elected who said, ‘I’m going to run on the platform of taking choices away from adults.’ Nobody runs on that. … I’ve not met one who was elected to take away the ability of a 50-year-old to smoke a cigar.”

Much of the problem, Bailey offered, is that so many of the anti-tobacco coalitions are inflexible. And he believes that stance hinders their progress. Sometimes their mission statement works against them, he said, by limiting their options.

Of the pair of retail representatives on the panel, Stewart’s Shops’ Faville led off. He stressed how important tobacco-related business is to his chain’s customers and its sales.

“We are heavily invested in the tobacco business,” said Faville. As far as regulation, he said that he’s been especially keeping his eyes on non-tobacco nicotine products. “It’s a little nerve-wracking. We’re still seeing how the legislation is going to affect us.”

Faville advised retailers to be active with their local and state industry associations. Help from advocates, like the New York Association of Convenience Stores (NYACS), have been critical in navigating any changes in the state.

Gate Petroleum’s Cole Fountain also noted the importance of tobacco not only for the chain, but for its customers. “We are a retail destination for tobacco,” he said.

Fountain advocated that retailers know their numbers. Detailed knowledge of sales numbers for tobacco-related products helps a retailer keep a finger on the pulse of market changes. “Break the tobacco category into subcategories,” said Fountain. “Share information with supply partners – what are they seeing from other customers.”

But he said that knowledge should go beyond just the tobacco numbers. Remember, tobacco drives sales in other categories. “How many transactions per day (for the entire store) and how many have some sort of tobacco transaction in them?”

Both Faville and Fountain, who are also YEO board members, recommended collaborating with suppliers to help gauge how sales are affected by changes in regulations throughout the many governmental jurisdictions throughout a chain’s footprint.

Lofstock led a Q-and-A session that drew many more questions than the panel had time to field during the time allotted. Many attendees had their queries boiled down to specifics. Questions ranged from techniques to changing tobacco sets to how federally legal marijuana will change the backbar to menthol bans being discriminatory to African-American smokers and more.

As the tobacco regulatory landscape continues to change at all levels of government, convenience retailers will need to stay nimble, stay knowledgeable and engage local lawmakers.

Session No. 4 of the five-part NAG/YEO Spring Leadership Series will address “How to Create a Next-Generation Store.” Featured panelists for the June 9, 2:00 p.m., event will be Jeff Carpenter, track leader with Cliff’s Fuel Co. and Kurtis Hutchinson, director of wholesale operations at Hutch’s. NAG Executive Director John Lofstock will serve as moderator. Register for the free webcast and view previous sessions on demand at the NAG Website Spring Leadership Series page.