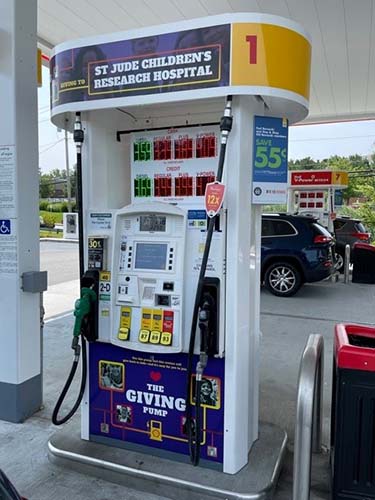 Shell Oil Co. has raised $1.5 million for a variety of children’s-focused charities across the country, including literacy programs, schools, hospitals, youth food pantries and more. These funds conclude the program that started Aug. 1 and ran through Sept. 30 — “The Giving Pump.”

In the program, a portion of purchases made by consumers who used the “The Giving Pump” at Shell stations supported children’s nonprofits. In the United States, the designated pumps were used 7.2 million times and pumped 72 million gallons of gas.

The Giving Pump program was part of Shell’s Force For Good initiative to drive positive change in local communities by giving back.

“The Giving Pump” at participating stations were specially marked with colorful signage to inspire consumers to fuel up and support a range of children’s focused nonprofits. More than 2,900 Shell stations across the United States participated in the two-month initiative.

Since launching Force For Good, Shell has highlighted the impact Shell wholesalers have in the communities in which they operate in, going beyond fuel quality and loyalty. Shell wholesalers have continued to be a Force For Good in local communities through initiatives like raising $1.1 million for the Leukemia and Lymphoma Society, raising $4.3 million for Boys and Girls Club of Kennewick and more.

In the U.S., Shell operates over 14,000 Shell-branded stations across 50 states and employs more than 17,000 people working to help tackle the challenges of the new energy future.