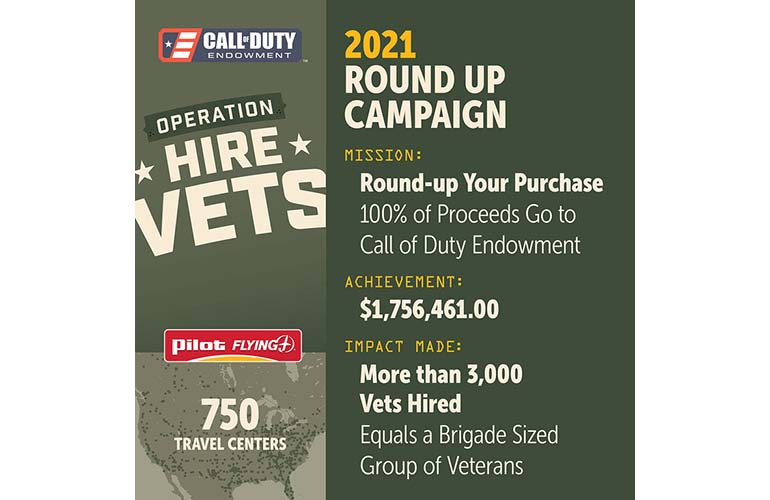 Pilot Co. and its guests raised a record-breaking $1.75 million through a three-week in-store round-up campaign in honor of Veterans Day to benefit the Call of Duty Endowment. The nonprofit organization is committed to placing Veterans into high-quality jobs after their service. This amount more than triples the original 2021 goal of $500,000 and will support a brigade-sized group of veterans — more than 3,000 service members — in their search for employment.

“We’re proud to support military service members and their families every day with a year-round discount at our stores,” said Shameek Konar, CEO of Pilot Co. “For Veterans Day, it was important that we do something special to not only thank Veterans, but also support them. We are overwhelmed by the generosity of our guests and the hard work of our team members to raise this record-setting amount for the Call of Duty Endowment that will help thousands of Veterans find their next career.”

As a part of its giving-back commitment, Pilot Co. has partnered with the Endowment since 2019 to support the nonprofit’s goal to help 100,000 Veterans secure post-service employment by 2024. From Oct. 25–Nov. 15, guests were invited to join the cause by rounding-up their change at the company’s more than 750 participating U.S. travel centers, with 100% of the proceeds going directly to the Endowment. Pilot Company matched $100,000 of the donations.

To help raise awareness for the Call of Duty Endowment’s mission and recognize Veterans, the campaign was featured on the Pilot Flying J No. 1 Chevrolet in two Xfinity Series races: at the Martinsville Speedway on Oct. 30 and at the Phoenix Raceway on Nov. 6. The Pilot Flying J No. 1 Chevrolet featured a camouflage picture collage of Veterans that have received employment assistance through the Endowment and of Pilot Co. team members that are Veterans, including the company’s Founder, Jim Haslam II.

On Veterans Day, Pilot Co. thanked all active-duty service members and veterans with a free $10 meal through the myRewards Plus app. Military members that verify their status can always get special savings, including a year-round 10% discount on food and beverages, at the company’s participating Pilot Flying J Travel Centers and One9 Fuel Network locations.

Founded in 1958 and headquartered in Knoxville, Tenn., Pilot Co. has grown its network to more than 800 retail and fueling locations and supplies more than 12 billion gallons of fuel per year. Its energy division also supplies DEF, bio and renewables and provides hauling and disposal services.