As customers get back into the swing of things after pandemic disruption, they’re hungry for innovative breakfast foods, and c-stores are responding with updated menu offerings.

Breakfast is the core of the entire foodservice program at B-Quik’s three convenience stores in Louisiana, and sales have continued to increase month over month, year after year, even as the pandemic virtually halted the usual morning commute throughout the country, reported David Schumaker, general manager for B-Quik.

“We are as busy as we’ve ever been,” Schumaker said, “not just for breakfast, but for overall store sales.”

Among the perennial favorites are B-Quik’s sausage or bacon, egg and cheese biscuits and croissants. All items are made on site and ready for grab and go.

B-Quik’s morning menu also includes numerous innovative beyond-bread items such as a chicken-and-waffle sandwich and French-toast-and-sausage sandwich. Loaded hash browns with scrambled eggs, bacon, sausage and ham are prepared in muffin form so they can be picked up and eaten without a fork. A pig-in-a-blanket offering consists of spicy sausage wrapped in bread-like pastry.

Following the initial six to eight weeks of the pandemic shutdown, the breakfast business at the five Hub Convenience Stores in North Dakota “bounced back very quickly and has been thriving ever since,” according to Jared Scheeler, CEO of The Hub, and 2021-2022 National Association of Convenience Stores (NACS) chairman. During this major daypart, the stores carry upwards of a dozen different varieties of made-on-site, grab-and-go breakfast sandwiches.

Sausage and sausage-and-egg croissants have long accounted for the lion’s share of morning sales, Scheeler explained. He added that sausage, egg and cheese on flatbread “catapulted to our No. 2 product” soon after its introduction, and a biscuit-and-gravy platter is “incredibly popular.” 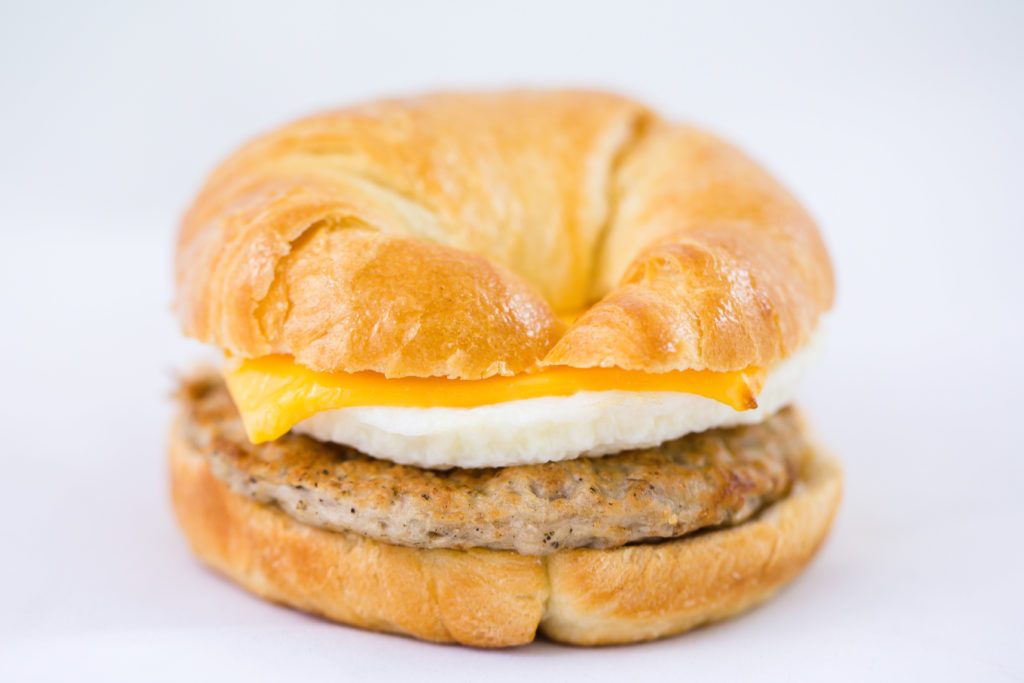 The Hub carries upwards of a dozen varieties of made-on-site, grab-and-go breakfast sandwiches.

Another hearty favorite is the three-meat ham, bacon and chorizo burrito with egg and a veggie blend, Scheeler noted. Accompaniments such as potato hash brown bites and potato-and-cheese bites add a higher ring to breakfast sales.

Limited-time offers (LTOs) such as a waffle breakfast sandwich with fried chicken breast or sausage and egg that debuted in early fall 2020 keep the selections interesting and remain on the menu as long as sales remain strong. LTOs are featured on the menu twice a year.

The Hub Café, available in some stores, serves made-to-order burritos, flatbreads and sandwiches on brioche buns. The sausage is a special blend supplied by a local butcher shop.

Fresh bakery category, including doughnuts, muffins and a wide variety of pastries, has always been a stand-out at The Hub, especially during the breakfast daypart. The company converted its flagship store from grab-and-go bakery to full-service, and this set-up will be a strong consideration for any new ground-up or renovated sites, Scheeler pointed out.

“During the pandemic, we expanded our bakery offerings and display cases to offer a more robust offering,” he said.

For 2022, Scheeler is concerned that continued supply chain challenges might hamper additional innovation in foodservice, including breakfast. However, he expects the stores’ breakfast business to continue to flourish.

Pilot Co.’s Pilot Flying J travel centers, with more than 750 locations in 44 states and six Canadian provinces, serve fresh, hot breakfast at more than 300 participating sites. Because many of its guests are professional drivers and other essential workers, the stores have remained open 24/7 throughout the pandemic.

“We’ve seen plenty of demand in the breakfast daypart, especially as we’ve added new items made fresh in our stores,” said Jamie King, senior director of food and beverage for Pilot Flying J.

This past summer, the stores featured an LTO French Toast Stacker Sandwich, which quickly earned a fan following, she said. For a knife-and-fork meal, the stores offer biscuits and gravy, as well as scrambled eggs with bacon and sausage.