In July, President Joseph Biden signed an Executive Order on Promoting Competition in the American Economy to create a fairer, more resilient and more dynamic economy. The meat and poultry processing sector is a textbook example, the White House said in a new statement, with lack of competition hurting consumers, producers and our economy.

When dominant middlemen control so much of the supply chain, they can increase their own profits at the expense of both farmers, who make less, and consumers, who pay more. Most farmers now have little or no choice of buyer for their product and little leverage to negotiate, causing their share of every dollar spent on food to decline. Fifty years ago, ranchers got over 60 cents of every dollar a consumer spent on beef, compared to about 39 cents today. Similarly, hog farmers got 40 to 60 cents on each dollar spent 50 years ago, down to about 19 cents today.

Even as farmers’ share of profits have dwindled, American consumers are paying more — with meat and poultry prices now the single largest contributor to the rising cost of food people consume at home, the statement said. And, when too few companies control such a large portion of the market, our food supply chains are susceptible to shocks. When COVID-19 or other disasters such as fires or cyberattacks shutter a plant, many ranchers have no other place to take their animals.

Today, President Biden met with farmers, ranchers and independent processors from across the country to hear from them and to announce the administration’s Action Plan for a Fairer, More Competitive, and More Resilient Meat and Poultry Supply Chain. The Action Plan includes four core strategies for creating a more competitive, fair, resilient meat and poultry sector, with better earnings for producers and more choices and affordable prices for consumers. 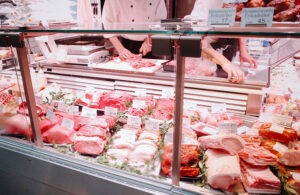 It is the policy of the Administration to promote vigorous and fair enforcement of the existing competition laws, and to ensure “all of government” works together to promote competition. The Department of Justice and USDA will cooperate on a new joint initiative to better coordinate their efforts—including launching within 30 days a new portal for reporting concerns about potential violations of the competition laws.

The agencies will protect the confidentiality of the complainants to the fullest extent allowed under the law. The agencies also announced their commitment to the strongest possible whistleblower protections. DOJ and USDA further announced that they will enhance their collaboration on referrals, information sharing, and identifying areas of the law in need of modernization.

“Right now, meatpackers have outsized power in setting the prices for beef,” the statement said. “The dominance of opaque contracts and insufficient competition undermine price discovery and fairness in the independent livestock markets, which ultimately lock producers into prices that aren’t the product of free and fair negotiation.”

In August, USDA began issuing new market reports on what beef-processors pay to provide additional insight into formula cattle trades and help promote fair and competitive markets. USDA is looking at what more can be done under existing authorities.

The administration will also work with Congress to make cattle markets fairer and more transparent. The administration is encouraged to see bipartisan legislation in the Senate by Sens. Grassley, Fischer, Tester and Wyden, and in the House by Reps. Axne and Feenstra, that seeks to improve price discovery in the cattle markets and facilitate actual negotiation of prices between livestock producers and packers.