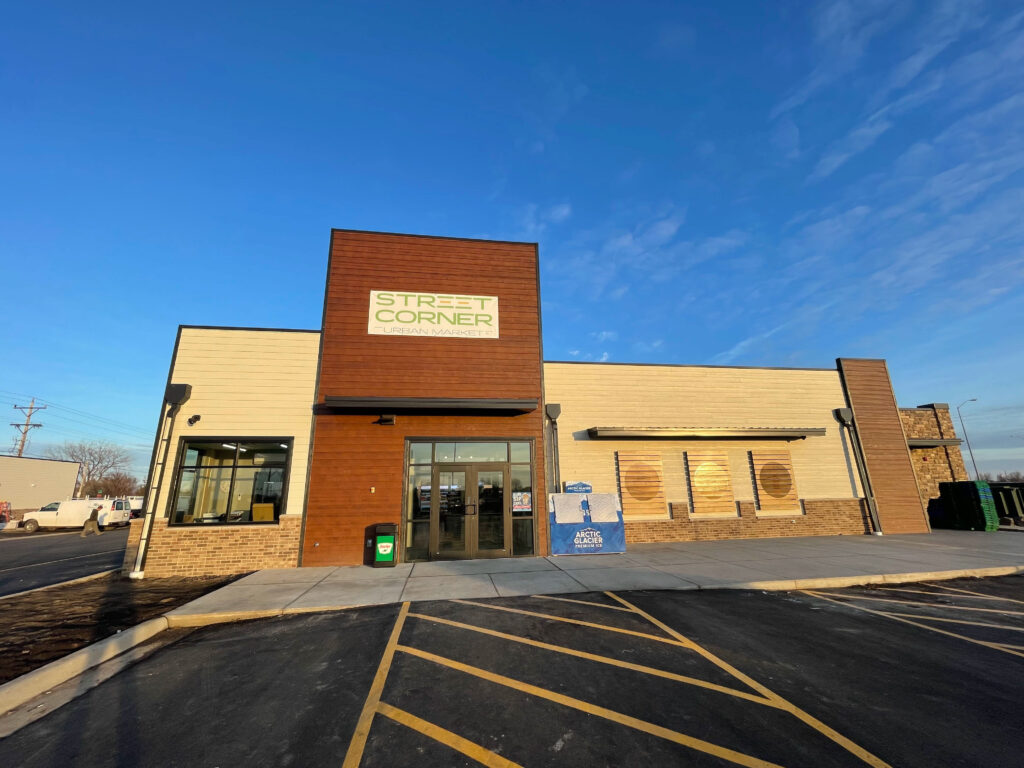 Street Corner may not be the new kid on the block — it first entered the market in the mid-1980s — but the chain’s reinvention post-pandemic positions it as a cutting-edge, modern c-store business. With a new CEO at the wheel, Street Corner recently debuted a revamped foodservice menu and is aggressively rolling out three tech-forward store prototypes — Urban Market, Express and Fuel Station.

Headquartered in Topeka, Kan., the Street Corner concept is a franchise-only model, registered in all 50 states, with 38 locations across the U.S. currently. In fall of 2021, the chain introduced four new locations. It plans to introduce another seven stores by April and a total of 16 by this summer.

Street Corner was founded by Peter LaColla and Dan McCabe in 1988. LaColla currently serves as president and chairman of the board for Street Corner, after 30 years leading the chain as CEO. He remains instrumental in helping Street Corner implement and adapt to new technology. McCabe is also the co-founder of legal practice McColla Enterprises Ltd. and provided legal expertise and guidance for Street Corner during his tenure. He is now retired.

Today, Street Corner is helmed by Vikram Dhillon, who stepped into the role of CEO in May 2021. Dhillon’s father was a 7-Eleven franchisee, and Dhillon grew up in the family business. He went on to run 7-Eleven stores for 20 years.

“We have close to 23 stores in our family, and I was overseeing seven of them,” Dhillon said.

In 2016, Dhillon became a Street Corner franchisee across San Diego and soon began working as a developer for the chain. He went on to become the head of the sales department, selling franchise agreements nationally to retailers.

Dhillon is still a Street Corner franchisee himself, with stores in both California and Arizona. And he’s also a 12% stockholder in the company.

In August, Street Corner welcomed Adrian Aybar as vice president of operations. Like Dhillon, Aybar is an equity partner in the company, and he ran a Street Corner franchise from 2014 to 2019.

“All of us that own the company actually have stores ourselves or have in the past,” Dhillon said. 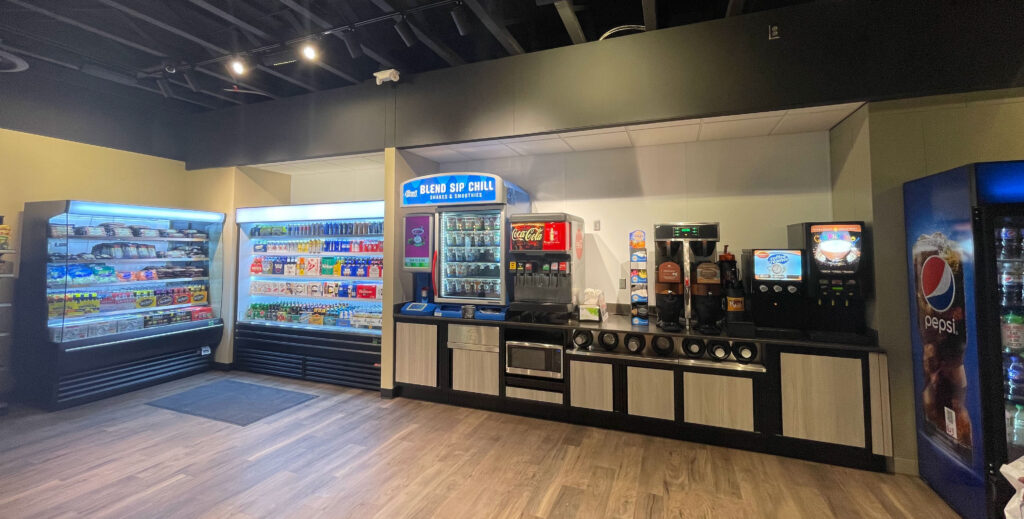 That distinction is something that Dhillon believes sets Street Corner apart from other franchise models.

“We’re actual franchisees who are running the company. We’re not just some corporate guys who never, ever owned a Street Corner franchise. We understand what the issues are in the franchise world and how we’re going to fix them, and that’s because of our experiences as franchisees,” he added.

The result is a ‘franchisee-centric’ company that works to make running a Street Corner business as easy as possible for franchisees.

When CStore Decisions last profiled Street Corner in 2010, the company was focused on 300-1,000-square-foot stores and kiosks in shopping malls.

Twelve years later, “a lot has changed,” Dhillon said. “We’re still in the mall business; it’s just not our focus.”

Of the 38 franchisee-run sites that Street Corner has today, Dhillon estimates that around 20 are mall locations. “There are still mall stores that perform really well sales-wise, and we’re keeping those open,” he said.

But as it looks ahead, Street Corner plans to focus its growth on its three prototype models.

The Express model will appear at smaller stores — airports, college campuses, office buildings — in the 800-1,500-square-foot range, with cashierless checkout.

“The Express model is going to have autonomous technology strictly because we’re not going to sell any age-restricted items at those stores, like tobacco, alcohol, etc.,” Dhillon said.

One of his San Diego stores is the first Street Corner to feature autonomous checkout.

“It’s in an office building, and there’s no cashiers. You swipe your debit or credit card to unlock the door, and you walk in. The artificial intelligence knows exactly who you are and what payment method is linked to you. You pick up what you want, and you walk right out,” he said.

When Dhillon joined Street Corner, he identified a gap in the market between large-scale organic grocery stores like Whole Foods and traditional convenience stores. Urban Market locations look to fill that gap with healthy convenience.

“That’s where we saw the opportunity,” he said.

At the Urban Market locations, guests can find the type of healthy, local and organic products they would find at an upscale organic grocery store as well as the typical fare they’d expect from a convenience store. Fresh grocery is a key component of this model, with an optional full-service deli.

Mobile checkout will also be available through the Street Corner app.

At the end of November, Street Corner opened its first Fuel Station location in Aberdeen, S.D., partnering with Sinclair Oil as the gas brand.

“A good thing about Street Corner is the franchisees can pick whatever fuel brand they like, and we help them negotiate the contracts,” Dhillon said.

Fuel stations, like the one in Aberdeen, also feature order-at-the-pump technology. The pumps feature built-in 27-inch touchscreens that let fuel customers purchase in-store items and pay in a single transaction.

Most items, including food, are available through the system, with the exception of age-restricted products.

The credit card customers used for gas will also be charged for the products. Customers can collect their order at the drive-through, or they can have it delivered to their car via curbside pickup. 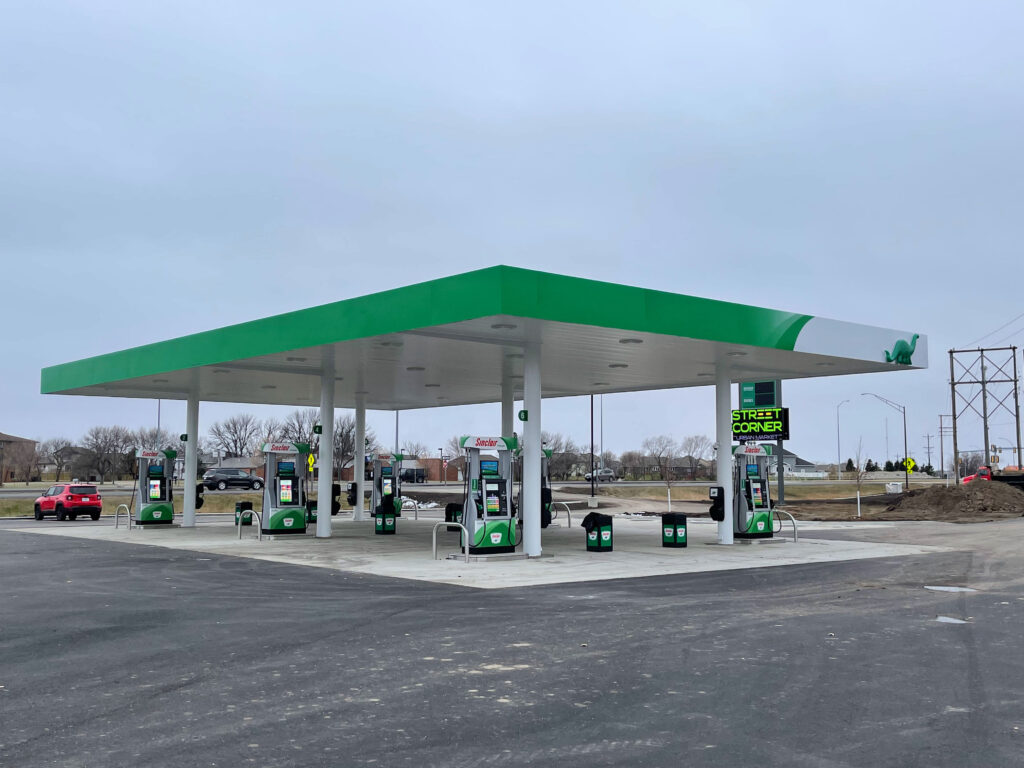 No matter which concept franchisees choose, new Street Corners are designed to achieve a fresh, healthy and urban look that features local images inside the store, including a skyline wall mural specific to the region. Graphics feature a color scheme of black, gray and white, with pops of bright color.

Street Corner isn’t requiring existing mall franchisees to remodel, but if Street Corner does resell a store, the new franchisee is required to update the design and branding to the latest standards, including a new logo that rolled out in 2019.

Dhillon noted that the COVID-19 pandemic gave Street Corner an opportunity to reinvent itself.

“I think that’s so important as a franchise. You have to look at the future of retail, how you can change and how to make that transition, and I think we did a lot of thinking during COVID,” he said.

As the world reopened, the chain had a busy fall, debuting a number of new stores: Fuel Stations in Aberdeen, S.D., and Ipswich, S.D., plus Express stores in Cincinnati, Ohio, and Rockaway, N.J. — and it’s not about to slow down. The 16 new sites set to roll out by next summer will be “all over the map,” and a mix of the three new formats.

At press time, the chain was also set to introduce a Fuel Station in Merced, Calif., an Urban Market in Clovis, Calif., plus its first international store in Panama City in early January 2022.

“We also have a couple of mall stores we’re reopening in some of the malls that shut down during COVID,” Dhillon said. “We are seeing a lot of increased sales in certain shopping centers.”

When it comes to foodservice, Street Corner aspires to become a destination for shoppers. Foodservice veteran Fred Wencel, consultant, fresh food and bakery program for Street Corner, created a new menu that features naan as a carrier for pizza, wraps and other menu items.

Millennials today, like Dhillon himself, are looking for fresh, healthy food options.

“I’m 36 years old,” Dhillon said. “I want to walk into a c-store and grab a nice vegan sandwich or something that’s freshly made in front of me. I’m not just picking up a taquito from a roller grill. And that’s what we’ve done in these communities. We’re changing the way people look at convenience stores.”

The new proprietary menu debuted at the Aberdeen, S.D., store that opened in late November. All food is made fresh in-store.

Sandwiches are wrapped in naan and eaten like a taco. “For sandwiches, we have your traditional Turkey Club, Buffalo Chicken, Chicken Caesar, Steak Fajita, Beef Bulgogi, Hot Italian Beef, Chicken Masala and so on,” Dhillon said. 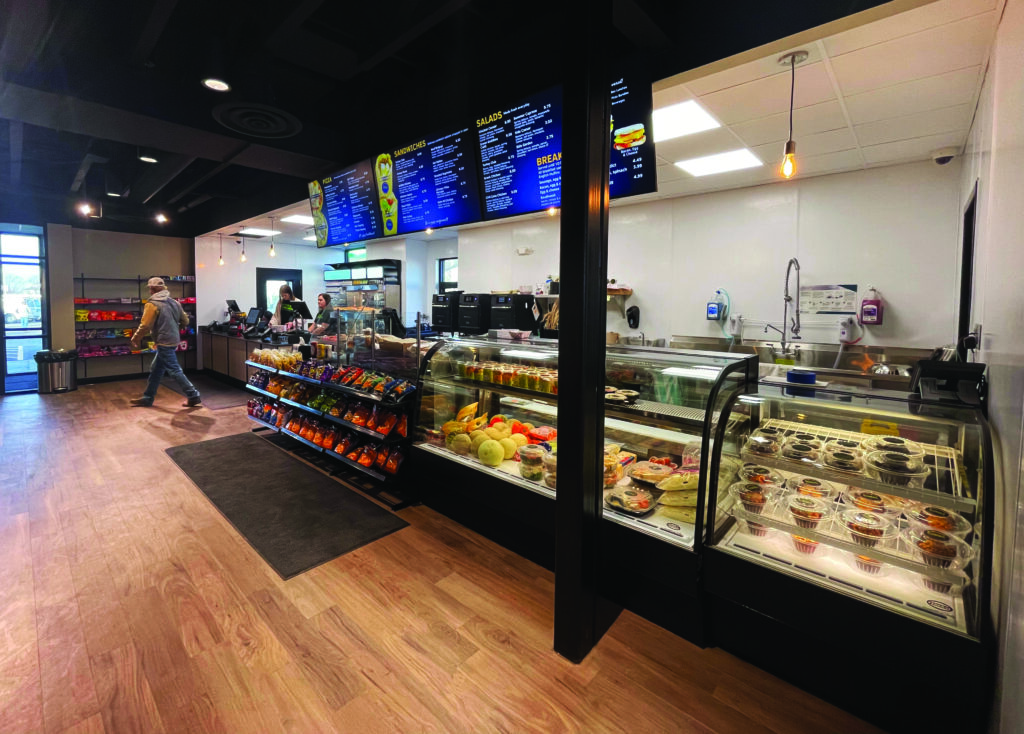 Single-serving pizzas are also made on naan and include varieties such as Beef Bulgogi, Chicken Chipotle, Margarita, Firecracker, Pepperoni, Hawaiian Ham, BLT, and Chicken Alfredo. The pizzas cook in two minutes and 30 seconds, made fresh in front of customers.

Salads include Chili Lime Chicken, Chicken Caesar, Greek Chicken and Turkey Club. “We also cut pieces of naan bread and put it on the side for them,” Dhillon said.

The breakfast menu features a number of sandwiches on English muffins or croissants, including Eggs Benedict; Egg White, Spinach and Cheese; and Steak and Egg.

Street Corner also features a robust grab-and-go selection, all of which is made inside the store, packaged and placed in the grab-and-go case. Sandwiches include Tuna, Chicken Salad, Egg Salad and Turkey and Cheese.

“We’re making everything that’s in our grab-and-go case fresh on the property — even our salads, fruit salads, fruit cups and parfaits,” Dhillon noted.

Coffee is a big focus for the chain, too, and it’s looking to stand out with its organic fair-trade coffee.

Urban Market and Fuel Station stores will have the option of adding a full-service barista coffee program. Most of the newer Urban Markets currently feature the program, including the one opening in Clovis, Calif., a store at the University of California San Diego, and one that is set to open in Hermosa Beach, Calif.

“The only reason we didn’t do it in (our newest) South Dakota store is because coffee wasn’t a big focal point for that demographic,” Dhillon said.

The Merced, Calif., location is the first Fuel Station to feature the barista program. 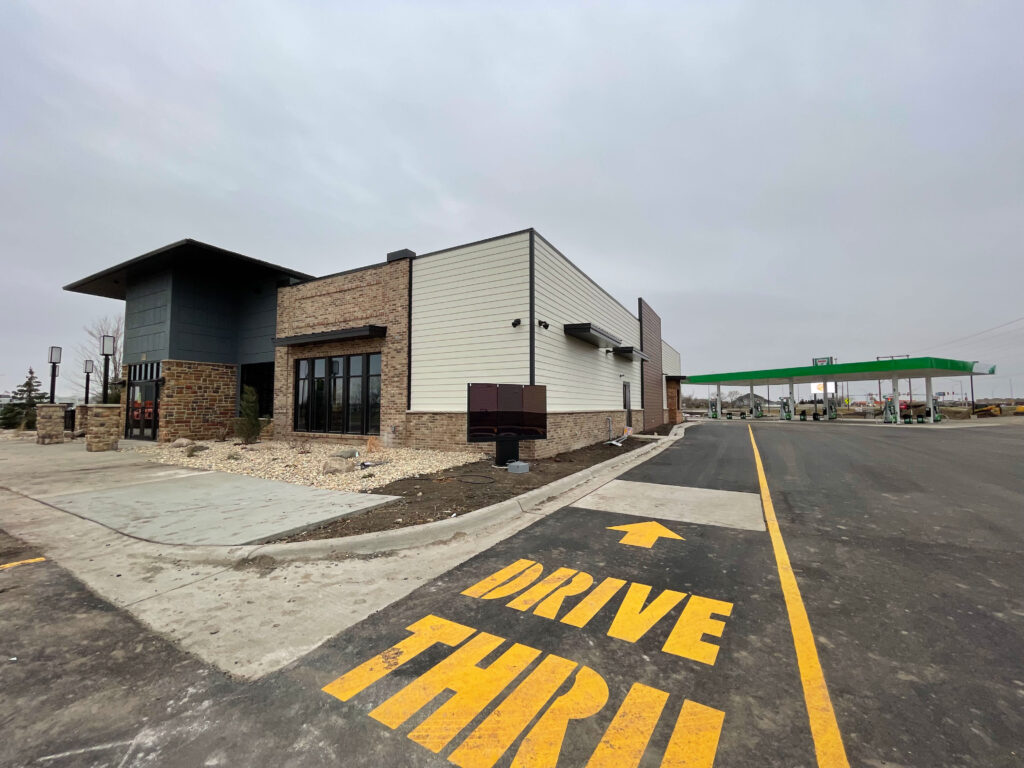 The Aberdeen, S.D., store is unique in that it features both a casino — a popular trend for gas stations in South Dakota — and a bar called Mulligans.

“The owner of the property used to operate a restaurant. They converted the property into a Street Corner, and they had the licensing rights to sell on-site alcohol,” he said.

Technology is an important focus for the chain, from the cashierless Express stores to the order-at-the pump technology to the self-checkout kiosks, which are currently available in the four newest stores.

“The key thing is, we can turn our point-of-sale (POS) systems on and off to do self-checkout or full-service. If it’s a slow day, and I’m short an employee, I can convert my POS — one of them — into a self-checkout just by the click of a button,” Dhillon said.

Electric-vehicle (EV) charging stations are being added to stores on the West Coast.

“If you look at our stores, we are small, we’re new, we’re urban, we’re fresh. We give that young vibe,” Dhillon said. “We reinvented ourselves, and we’re seeing a new generation of franchisees — the millennial generation — is coming in.”

Street Corner aspires to have one c-store in every major U.S. city and offers a flexible option for franchisees.

The chain is now examining how it can help upgrade existing stores and help them grow sales, engaging one-on-one with franchisees weekly. For example, it’s upgrading inventory management and back-office systems and digitizing daily checklists.

“We’re actually dissecting each store, looking at their sales data, comparing them to last week’s sales,” Dhillon explained. “We’re asking, ‘How can we help you?’ and working with the franchisees in a partnership instead of dictating what they have to do. If they have an idea, we want to hear it, and I think that’s one thing a lot of franchises don’t do.”

As he steers Street Corner into the future, Dhillon’s goal is both simple and ambitious: “I want to perfect the system in the franchising world.”