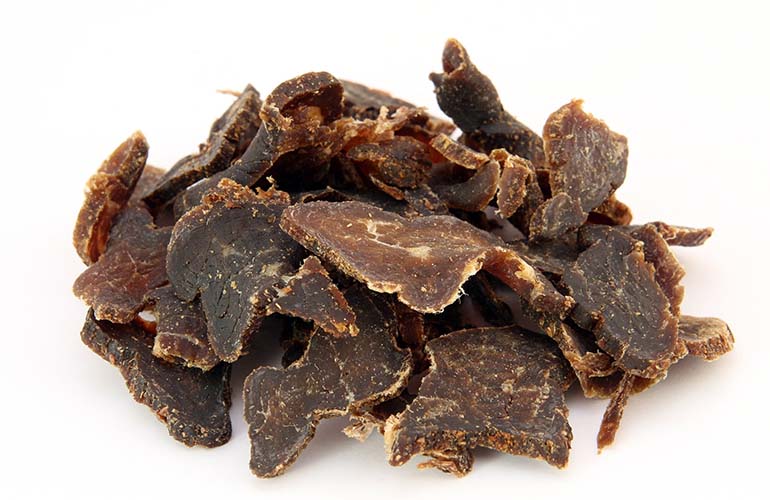 Biltong (Dutch for “meat strip”) is a dried, cured meat — usually beef, but also game meats like ostrich or kudu, and even chicken or fish — that rose to popularity across several Southern African countries such as South Africa, Zimbabwe, Malawi, Namibia, Botswana and Zambia. Usually eaten as a snack, jerky originated in North and South America.

Despite the similarities, biltong differs from jerky in several ways. The meat that is used in biltong is generally thicker — about an inch wide strip — than jerky because of the longer drying time. That process, along with vinegar, salt and spices, cures the meat and adds both texture and flavor.

In addition, jerky is not dried with vinegar but contains sugar additives.

Biltong has none. Since it is dried and cured, biltong needn’t be refrigerated once opened.

Many claim that biltong is more healthful than beef jerky — a major marketing point — since it is both lean and high in protein content. It also contains essential vitamins and minerals, is low in carbohydrates and high in iron, and is considered a superfood. For this reason, it has become a favorite during workouts and for snacking.

According to some sources, 25 grams of biltong per day provide half of the recommended daily allowance of protein, which is vital for muscle growth, and aid in burning off fats. Due to biltong’s higher energy content, some recommend not eating too much of it in a day, which could result in weight gain. Approximately 30 grams per day is suggested.

Perhaps the most pleasantly surprising thing about biltong is its taste, or rather tastes. Spices such as coriander, black pepper, brown sugar, sea salt, paprika and garlic can all be used as seasoning, a major plus in the eyes of consumers who have demonstrated their love of variety.