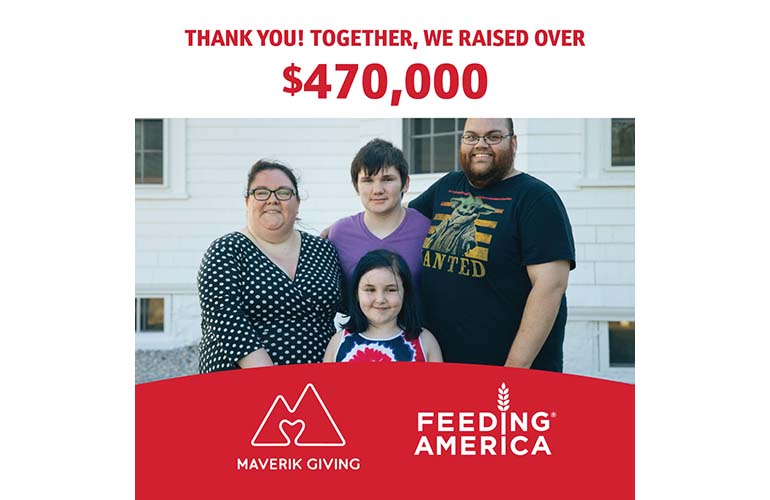 Maverik — Adventure’s First Stop’s guests and team members rounded up their cash and credit transactions to the nearest dollar or more at Maverik stores across 12 states, raising $421,397 that will be donated to Feeding America, the nation’s largest domestic hunger-relief organization.

The funds will strengthen Maverik’s direct donation of $50,000 to kick off the campaign, totaling $471,397 donated this year.

Ninety percent of the Round Up donations that were raised will stay local, with each region’s collections going to food banks that serve people in that same region. Maverik’s donation will be distributed to Feeding America member food banks across 12 western states where Maverik operates. The remaining donation will support national strategies to help Feeding America address hunger in America.

“We are overwhelmed by the kindness of our customers and team members this year!” said Chuck Maggelet, president and chief adventure guide of Maverik. “With record-high food prices and many turning to food banks this season, it’s an amazing feeling to help make an impact through this contribution and donations through our food waste reduction program.”

Since April, Maverik’s food waste reduction program has thus far donated over 492,000 pounds of surplus food helping to provide over 410,000 meals. The program is running in more than 90 stores in five states, and Maverik plans to continually expand it throughout its operating states. Committed to helping fight local hunger, Maverik is a longstanding supporter of Feeding America given its breadth of food distribution services across its nationwide network of 200 food banks and 60,000 partner agencies, food pantries and meal programs. Last year Maverik donated more than $580,000 to Feeding America helping to provide more than 5 million meals.

Maverik — Adventure’s First Stop fuels adventures in nearly 400 locations and growing across 12 western states, making it the largest independent fuel marketer in the Intermountain West. Locations include Arizona, California, Colorado, Idaho, New Mexico, Nebraska, Nevada, Oregon, South Dakota, Utah, Washington and Wyoming. Maverik is known for its premium BonFire food, made fresh in every Maverik, every day, and values on fuel, drinks and snacks. Maverik sells exclusive products such as fresh-made, gourmet burritos, sandwiches, pizzas, cookies and coffee blends from around the world.