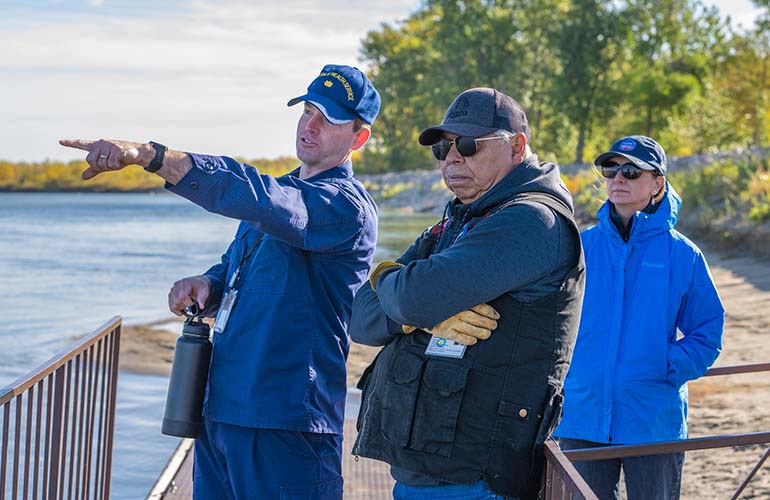 Planning with MPC began in the spring to allow time to address the event’s size and scope. It was a full-scale exercise, meaning it simulated an actual emergency with containment and recovery equipment, an incident command post and ongoing updates in real time that prompted decisions and actions intended to help validate preparedness.

MPC works diligently to prevent incidents throughout its operations and maintain robust preparedness to enable an effective response if an emergency event occurs. This commitment to response readiness is reflected through its continuous training, including 20 multi-agency, worst-case oil spill exercises in 2022 alone as well as numerous smaller drills and tabletop exercises that were regulatorily required.

“By working together with our response partners, we can reduce impacts of both natural and human-made disasters on people, the economy and the environment,” said Betsy Smidinger, director of U.S. EPA Region 8’s duperfund and emergency management division. “Partnering with Marathon, the Standing Rock Sioux Tribe, the state of North Dakota and city and county emergency management entities in the full-scale exercise allowed us to work through, and evaluate the effectiveness of, our response protocols in a setting that simulates the real-world challenges we could face in a true emergency.” Under the exercise scenario, drill participants acted as if they were responding to an oil spill at the refinery’s tank farm that led to oil reaching the nearby Missouri River. On the drill’s first day, the refinery fire department’s emergency response team deployed booms on the river to demonstrate how spill containment would look.

“Showcasing the Mandan team’s ability for all the agencies was priceless,” said MPC Emergency Preparedness Coordinator Servil Hoff. “This is an aspect that most people don’t ever see, including the process of boom deployment with recovery and all the equipment and resources that are required.”

“EPA wanted to make sure Standing Rock was involved to show them the ability of the refinery to respond and to ensure them that we are all united if an incident were to happen,” Hoff said.

Mandan Refinery Fire Chief Jamie Reinholt pointed to this emphasis on cooperation as a major factor behind the drill’s overall success. He noted the positive feedback from third-party evaluators who were on-site throughout the exercise.

“All observers had great comments from both days. The planning teams worked great together, groups were engaged and well-prepared, and it showed,” Reinholt said. “I think everyone that participated took something back to their locations.”