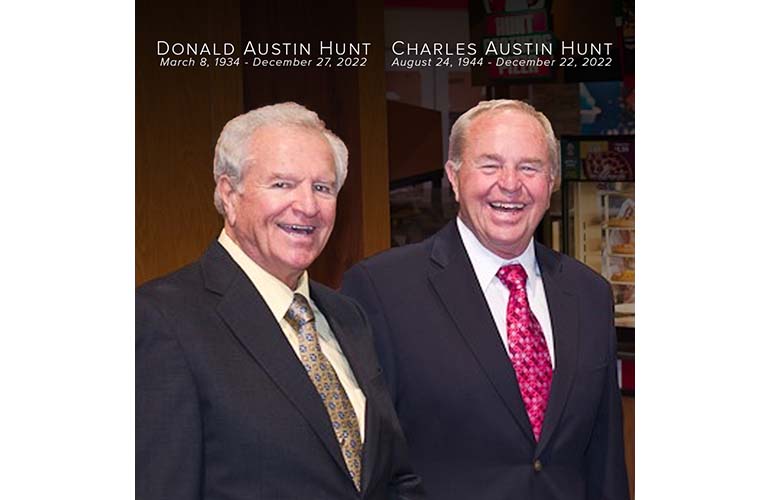 The last living Hunt Brothers Pizza co-founders, brothers Charlie Hunt, 78, and Don Hunt, 88, passed on Dec. 22 and Dec. 27, respectively. They are preceded in death by their two brothers and co-founders Lonnie Hunt and Jim Hunt.

“The brothers knew where they were going when they passed, and we take comfort in knowing they are reunited again in Heaven,” said Scott Hunt, CEO of Hunt Brothers Pizza and son of Don Hunt.

Alongside their brothers, Don and Charlie Hunt grew up in Evansville, Ind., working in their father’s restaurant, Austin’s Drive In. After Don finished playing football at Vanderbilt University he started Pepe’s Pizza in 1962, and his brothers joined him to build the business over two decades across the Southeast. After working separately during the 1980s the brothers reconnected in 1991 to form a new company focused on helping people, which became Hunt Brothers Pizza.

“Don and Charlie’s lives can be summed up by the mantra my father often repeated: ‘Trust in God to meet our needs, and be a blessing to people,’” said Scott Hunt. “They were true pioneers in the industry, enriching the lives of everyone they touched, and we will continue to spread their positive message as we work toward growing the business.”

The four brothers’ unique talents and abilities formed a cohesive team that has led to an extended family of over 9,000 store partnerships, over 550 team members, and countless communities and charities supported over the years. Don’s vision and drive were vital to the growth of the company, while Charlie’s gentle spirit was a core foundation as well. Since 2009, the company has been led by the second generation of leaders from the Hunt family.

With more than 9,000 locations across the country, Hunt Brothers Pizza is one of the nation’s largest brands of made-to-order pizza in the convenience store industry. Hunt Brothers Pizza offers original and thin crust pizzas available as a grab-and-go Hunk A Pizza, perfect for today’s on-the-go lifestyle, or as a customizable whole pizza that is an exceptional value with All Toppings No Extra Charge. Hunt Brothers Pizza is headquartered in Nashville, Tenn., and is family owned and operated.