The pinch of the recession is forcing consumers to take a hard look at where they can tighten their belts and how they can stretch their hard-earned dollars. Print and digital coupon and in-store promotion redemptions are on the rise as consumers look to save on a range of items, such as food, clothing and household products. Gas rewards are another way in which consumers are demonstrating their frugality and the gas-centered convenience industry finds itself in the midst of this trend.

The Convenience Consumer Insights Panel (cciPanel), a partnership between MSA, Paradigm Sample and Convenience Store Decisions, posed questions to c-store shoppers regarding their participation in and attitudes toward gas rewards programs. A fuel rewards program was described as any type of program offered by a c-store, supermarket or other retail outlet that tracks purchases and offers rewards to reduce fuel prices. Their responses reveal shoppers most commonly earn gas rewards through their supermarkets and typically enjoy per gallon discounts ranging from 10 cents up to 39 cents.

The study found 89% would be highly motivated or somewhat motivated to shop more at these supermarkets and other stores that participate in these programs. Not only do the supermarkets benefit, but also the gas retailers as shoppers reported favorable opinions of the gas retailers that participate in programs that ultimately help them reduce their gas outlays. Furthermore, where gas operators offer programs so shoppers can earn grocery rewards/food perks when they fill up on gas to get a discount to redeem at a partnering supermarket, three-quarters reported that they would definitely or probably make these gas stations and convenience stores their regular station to fill up. The following are highlights from this custom study.

Program Awareness: Are you aware of a of gas rewards program being offered in your area? Approximately 83% of panelists described their favored c-store as a store that is part of a gas station, while 17% described their preferred store as a store that sells core convenience items like snacks, soft drinks, liquor and cigarettes, but does not sell gas. Among those whose favored a c-store that sells gas, 75% were aware of a gas rewards program in their market. 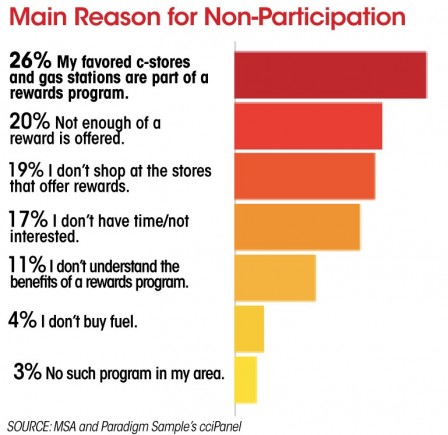 Participation: Do you currently participate or are enrolled in a rewards program where you earn gas discounts? Even though 75% of shoppers reported that they were aware of such programs, only 69% of these shoppers actually participated in a program to earn gas discounts. Among the shoppers who opted not to participate, the top reasons cited were “My favored gas station(s) aren’t part of a rewards program” (26%), followed by “Not enough of a reward is offered” (20%) and “I don’t shop at the stores that offer rewards” (19%).

Retail Opportunity: What level of discount per gallon do you often achieve? What is your perception of the overall savings that you are achieving on your gas purchases? While the most common per gallon discount r 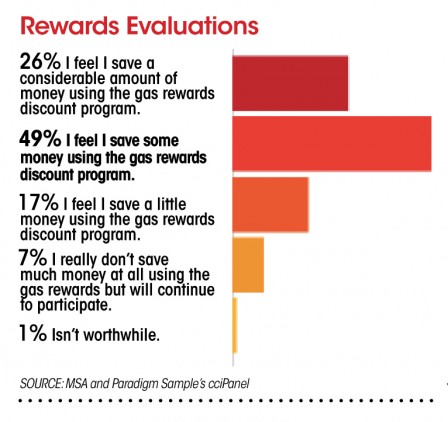 anged from 10-39 cents, the majority of participants reported they saved a considerable amount (26%) or some money (49%) using the rewards discount program. Even more importantly, only 1% of participants claimed that the program “wasn’t worthwhile,” which bodes well for supermarkets and potentially other retailers as they will continue to spend money at these outlets with the goal of taking advantage of reduced fuel expenditures. 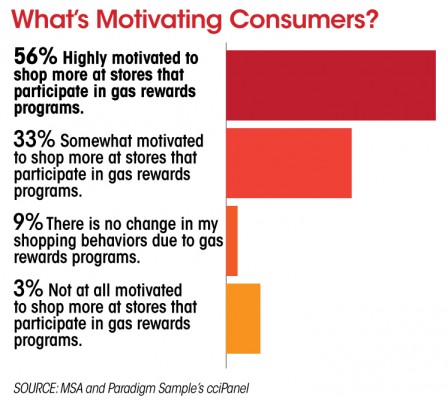 Store Loyalty: Are you more likely to shop in stores that offer a gas discount rewards program? Shoppers’ loyalty to the supermarkets and other stores that participate in these programs is evident with 89% indicating they would be highly motivated or somewhat motivated to shop more at these stores. The higher per gallon discounts achieved, the more that the shopper spends, improving the overall dollar ring at checkout for the retailer, as well as moving more products for those manufacturers that have partnered with retailers for these reward programs.

Redemption of Rewards: What are your usual rewards habits?  Convenience is a factor in redemption behavior as 39% of shoppers wait until they need a fill up before claiming whatever discounts are available to them, while 19% prefer immediate gratification, redeeming as soon as the discount is earned.The remaining shoppers accumulate rewards until they achieved significant savings or wait to redeem until just prior to the expiration date. 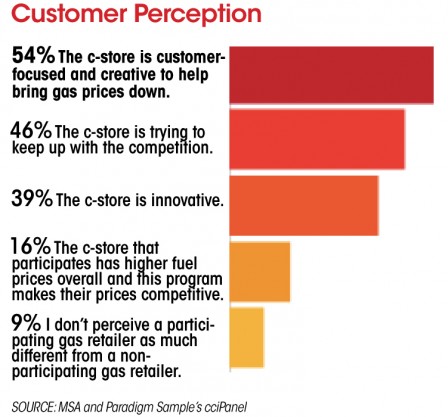 C-store Shopping Frequency: When you redeem your gas rewards program discount, how often to you go in-store at the gas station to make a purchase other than gas? Fifty-five percent of shoppers filling up their tank will always or most of the times stop inside the convenience store to purchase other items, while 41% will only stop in if they need to purchase specific items. Gas station operators must continue to implement tactics to entice shoppers to leave their car and go inside the convenience store or gas station to shop. Among the always/most of the time group, 54% visit the store more frequently when redeeming gas rewards, which is good news for c-store operators in that the consumer is not pocketing the savings to spend elsewhere. It would be even better news if these shoppers made impulse while inside the store. 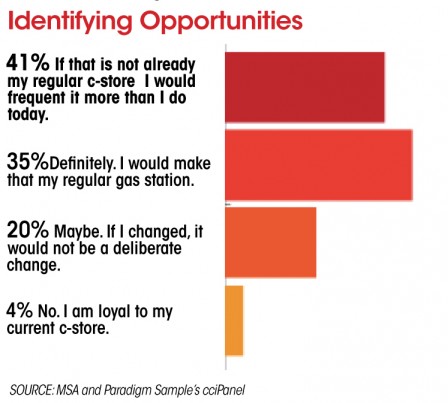 Interest in a Reverse Program: Some gas stations are now doing the reverse where you can earn grocery rewards/food perks when you fill up on gas and you get a discount when you shop at a partnering supermarket. Would this sort of reward program influence you to make more of your gas purchases at a participating gas station? There is strong interest in this type of reverse program as three-quarters reported that they would definitely or probably make these gas stations their regular station to fill up.

Demographics: Participants in the gas rewards programs were equally split in terms of gender and education. When compared to the c-store shoppers who were aware, but chose not to participate or to the shoppers who were unaware of these types of programs, the program participants were more likely to be married, homeowners and with kids. Even households with incomes greater than $100,000 were taking advantage of these fuel discount programs.

Implications and Potential
Shoppers want to maximize their savings wherever they shop, whether buying groceries or filling up with gas. Retailers participating in these fuel reward programs need to make sure that their clientele are aware of the program and clearly communicate how it works and the savings that shoppers will enjoy when they redeem their rewards. Consequently, these retailers will themselves benefit from increased loyalty to their stores.

cciPanel conducted exclusive research between Aug. 20 and Sept. 1, 2011 to explore participation in and attitudes about gas rewards programs among convenience-store shoppers throughout the U.S. Respondents were balanced by U.S. Census regions. Results include responses from 628 adults (18 years and older) who shopped at a convenience store within the past 60 days.