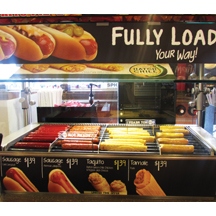 Roller grill food offerings can always be improved, but never at the expense of freshness and quality.

In fact, fresh, savory items, such as hot dogs, sausages, brats, ethnic items, fresh condiments, savory sides and bundled deals, can serve as a springboard, enabling foodservice programs to grow in sophistication and to better meet the changing tastes of consumers.

The potential payoff is solid. Convenience store foodservice is a $10.9 billion industry, according to research firm Technomic, and approximately 40% of consumers told the group that they would visit convenience stores for prepared foods more often if freshness and quality were improved.

Operators are responding, not only with fresher, move diverse offerings but with programs suited to local customers’ lifestyles.

“In our part of the state, north central Florida, we have more of a laid-back crowd in general,” Smith said. “I think we have a few more ‘Bubbas’ with the agricultural and logging industries, and they keep a lot of different hours and eat at different times. They may be on the truck or in the field at 4 a.m., so 24-hour stores need to have something ready to go right then.”

A 5.4-ounce hot dog, corn dog and jalapeño-and-cheese dog entries have proven to be favorites. Hudson recently expanded its grill offerings to include tornados, egg rolls, chimichangas and other items, which have done well, especially at peak periods, said Smith.

“It is the times when people are coming in after work or at lunch time,” Smith said. “Obviously, it’s hard to get away from a big, all-beef hot dog, but we see a lot of growth in the jalapeños and cheese, which is doing really well.”
The pricing structure means that volume is essential, Smith pointed out.

“If we can’t do between a case-and-a-half and two cases a day at each store, we’re not really hitting the numbers we want to hit,” Smith said. “We’ve got a great relationship with our bread company, and so we can keep bread in line.”
The company is also looking at pre-wrapped buns to bolster the quality of service.“Women, especially, like that,” Smith said.

Smith has gotten good results from using social media to spread the word about his program. “They can actually see the specials on their smartphones,” he said. More conventional pump toppers also help bring gas customers into the stores, as does a loyalty program that pays off in gasoline discounts.

QUALITY BUSINESS
Jim Callahan, the former director of marketing for Green Oil Co. in Fairburn, Ga., recalled that when he first joined Green Oil 15 years ago and installed a pair of large roller grills in a new location, he insisted that staffers throw out product once it passed its peak.

“I got all kinds of criticism,” Callahan said. “We had lots of stales, which were very unacceptable.”
The company delivers fuel to 112 stores, owns 40 sites and operates a pair of truck stops in Fairburn and Newnan, Ga., outside of Atlanta.

The case that Callahan made, successfully, was that higher quality would ultimately lead to repeat business. Today, history has proven him right. “It’s the price you have to pay for success,” he said, referring to the early doubters.

Leaving product on the grill too long is the most common mistake operators make, Callahan added. “If it won’t pass the Mother Test—if you wouldn’t serve it to your mother—then you shouldn’t serve it.”

How did he convince his colleagues to go along?

“Creep, crawl, walk, trot, run,’” he told them. “A baby starts out crawling, not running. When your deli program is in its infancy you have to be patient with it.”

Callahan offered several tips on maximizing sales of meat items at lunch or dinner, both on and off the roller grill, including:
• Variety is key. “You’ve got to have a variety because people aren’t going to eat hot dogs every single day,” Callahan said.
• Maintain a high level of sanitation throughout. “You have to have a clean store, inside and out, including the rest rooms,” Callahan said. “The secret to deli is just to be super clean, because even if you have a dirty ‘Wet Floor’ sign, it turns people off. The rest of the store is what sells foodservice..”
• Bundled beverages can help make a lunch or dinner program. “Coffee and fountain have an influence. We package deals together, and if you do it right the drink companies will fight to be on your program,” Callahan said. Green Oil’s meal deal, which rotates weekly, includes a grill item, a 20-ounce Coke or Pepsi and a bag of chips.
• Invest in the right equipment. “We spent $600 more to get a bun steamer rather than a bun warmer,” Callahan said, as an example. “A bun warmer will keep them warm but it will dry them out. A bun steamer will keep them warm but soft.”
• Make it visible. For example, Green Oil displays its lunch and dinner menu out on the reader boards, and places a sign on each of their stores’ entrances.

EXPANDING OPTIONS
How to approach building a store’s lunch and dinner business hinges on the level of foodservice management wants to maintain, explained Jerry Weiner, vice president of foodservice at Rutter’s Farm Stores, which operates 60 locations in south central Pennsylvania.

“If your program is primarily roller grill items and some degree of hot and cold grab and go, with all products coming to you already packaged from your commissary or a third party, then expanding those options to more variety and a broader offering makes sense,” Weiner said. “You are obviously limited to what you can offer just by the design of those programs, but there is nothing wrong with that if that’s who you are.”

There are many options that lend themselves to these other dayparts, Weiner pointed out, such as cheeseburger roller bites and cheesy taco dogs for the roller grill that expand the typical offering, as well as cheeseburgers and meatball subs for hot grab-and-go options.

“If you have more of a made-to-order program, the possibilities are almost endless,” Weiner said. “I see a roller grill as an accompaniment; I don’t think it’s a gateway.”

Roller grills proved their worth as part of a sophisticated foodservice offering to Weiner back in 2007 when he downsized his units from 60- to 45-unit models. “I thought I’d be cutting into the roller grill business,” he said. “What I found, much to my surprise and happiness, was that I sold more roller grill products.”

“The way people eat these days, I don’t know that there is a breakfast/lunch/dinner so much,” Weiner said. “They are snacking a lot. Snack items are where I’m seeing the biggest bangs, in the late afternoon and early evening. Tornados, taquitos, those are snacks; we sell them all day long.”

In fact, Weiner continued, c-store operators may be short-selling their lunch and dinner businesses if they still believe they can only sell breakfast sausages off the grill just during typical morning hours.

“People eat different things at different times of the day. I sell breakfast at 11 o’clock at night and two in the morning, and I sell Italian sausages off the roller grill at seven in the morning,” Weiner said. “I think they make the mistake of predetermining what they think a consumer is going to want at a certain time of day. I don’t know that you can do that anymore.”

With some thought and effort, a roller grill program can be effective, Weiner concluded.

“These days there are so many more options. I remember when all you could put on there was a hot dog and a sausage,” he said. “Now that there are just so many choices it really opens up to a whole lot of possibilities.”