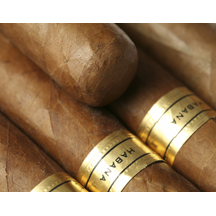 What will it take to get Cuban cigars onto c-store shelves?

Convenience store operators who thought cigars when they learned of President Obama’s plan to restore diplomatic ties with Cuba and dismantle economic sanctions may have to wait a while to bring those quality stogies to shelves.

With an embassy probably opening in Havana and travel restrictions slowly loosening, tobacco lovers have reason to hope that it’s just a matter of time before the first retail barriers fall.

Under new rules that are scheduled to be implemented soon, tourists will be able to bring back up to $100 worth of the famed cigars. Getting them onto store shelves, however, will take an act of Congress.
Until then, c-stores who rely on cigar sales as part of their profit margin can continue to keep shelves stocked with the current top selling brands and take advantage of promotions.

According to market research firm Information Resources Inc. (IRI), sales of cigars in convenience stores totaled $2.4 billion for the 52-weeks ended Dec. 28, 2014, a year-to-year increase of 2.66%.

“Even for the few Americans that may travel to Cuba, bringing back $100 worth of Cuban cigars is not many, probably four cigars total,” said Jeremy Weiner, marketing and purchasing director for Smoker Friendly in Boulder, Colo. “As far as the c-store cigar sales, I do not think anything will change in the near future until the embargo is totally lifted. After the embargo is lifted, it will get interesting as to what brands will be available in the U.S.”

At present, Weiner pointed out, the pre-price multi-pack cigarillos are the hot item, something, he said, that should continue throughout 2015. “Also, many of the manufacturers are offering limited-time unique flavors to help increase cigar sales.”

“It’s the Swisher Sweets and the White Owls, the Dutch Masters and Backwoods—the cigarillos as they are called—that sell,” she noted.

Rivera’s stores allot one-third of a six-foot rack to cigars. There has been no effort to promote the category, she noted. “If we could build sales in the category it would be great, but it’s very hard to promote tobacco when you can’t do any billboards, can’t do any TV.”

“First off, they need to set up trade agreements for the products to come in, including cigars,” said Steven Marascia, director of research for Capitol Securities Management Inc. of Richmond, Va. “Second is, who brings them in? Will it be a private outfit or, potentially, a large tobacco company who might already have convenience store set-ups for marketing their own cigars, like for example an Altria? They don’t have anything with Cuba yet, but you never know.”

A third consideration will be the price points at which the Cubans will be offered, which may well prove too high for the large majority of c-store operators. “I’ve been to Cuba,” Marascia said, “I’ve had their cigars there and here in the country, too. Some people view them as being the best in the world.”
So what would be the price points if Cuban cigars are sold in the U.S.?

“You would figure that potentially it might come in as a very pricey cigar,” Marascia said. “The question is, if they do offer them in convenience stores, will they be bought? In Cuba, in Havana, you pay what would equate to $8-$20 in U.S. dollars for a Cuban cigar. So the question is, what will it translate to here in the U.S.? What will they charge? What will the mark-ups be? And then, will consumers—when they see them at the counters in convenience stores—buy them?”

Only a certain percentage of convenience stores have humidors, a necessity when selling many cigars. The possibility of marketing lines of popular-priced Cubans is one that Marascia said he finds intriguing. He confessed that he doesn’t know of any such lines at present.

“I know there are all kinds of different types of cigars,” he said. “There are all different price ranges, but from when I was there, I don’t remember what the low price point was.”

While the possibilities are interesting to contemplate, reality is still the overriding factor where Cuban cigars are concerned.

“Nothing will happen until Congress ends the embargo,” agreed Terry Gallagher, Jr., president of Smoker Friendly International LLC, in Boulder, Colo. “The president cannot have an executive order that ends it. So, it’s probably unlikely we will see the embargo lifted this year, in my opinion.”

In general, Gallagher doesn’t see the Cuban cigars as being a good offering for c-stores unless a specific location is already in the premium business.

“I guess I don’t really see the Cubans looking to the lower end,” Gallagher suggested, “especially if you are talking the cigarillo or blunt market. Everyone in that category has already raced to the bottom and has made it undesirable to enter from a margin aspect.”

Time Will Tell
The timeline for a trade pact change remains unknown.

“It’s going to be tough, because I haven’t seen any movement yet. First off, you’ve got to get everything through Congress, and nobody knows what is going to happen with Congress and Obama over the next year or two, so it’s hard. You need to have Congressional approval to get these trade pacts through.”

“For them it’s all about getting people in there to buy their products and maximize customers’ visits by having them looking at impulse items,” Marascia said. “Cigars might be one of those impulse-buying products that they have out there. They have limited shelf space that they give to tobacco in general and cigars in particular, so they are very cognizant of what is selling and what is not.”

Marascia doesn’t expect sales to be negatively impacted by legislative action in the coming year, unless it comes in the form of a domestic tax.

“Emphasize the brands that are selling, to attract customer dollars to come across the counters and into the cash registers,” he said.