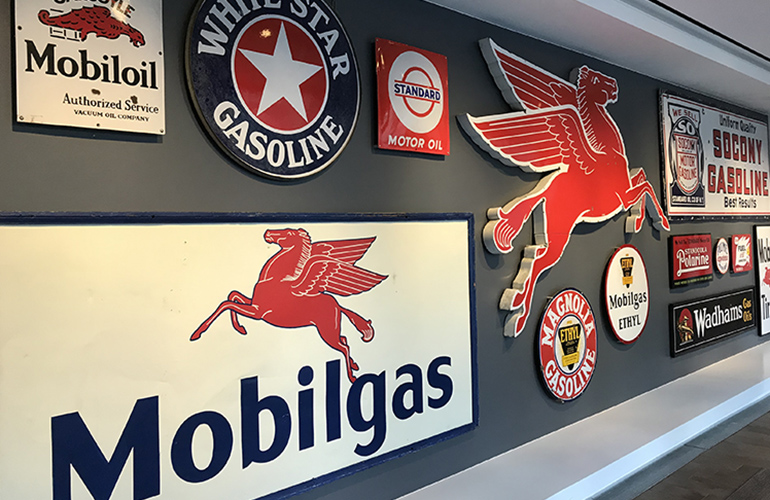 When ExxonMobil opened its 385-acre Houston campus, just north of the city in Spring, Texas, in 2015, the company planned nearly every detail with its employees in mind.

Everything from the interior design to outdoor landscaping to company history are meant to not only make ExxonMobil’s Houston campus a nice place to work for that 9,000-person workforce, but to also instill a sense of pride and belonging in a historic company doing important work.

The campus is broken into four quadrants: North, East, West and South. Or, as they’re labeled here: Nature, Energy, Wellness and Science. Building facades are color coded to match each of those designations to help employees and visitors alike know where on campus they are.

Beyond simple naming of buildings, though, the company has gone to great lengths to remove everyday worries from its workers so they can focus on doing their jobs. On campus is a retail district with a dry cleaner, barbershop and salon, child care facilities, pharmacy, fitness spaces, etc. – if there’s something people need to do as part of their everyday life, they can take care of that personal business “at work” without the distraction of trying to find time to fit it in during off hours. There’s even a bakery to handle orders for family things like birthday cakes and pastries for parties.

Stacey Trefts, project manager at ExxonMobil who hosted a media tour, said that the space is designed for people to “bump into each other.” By that, she meant that the company realizes that people and collaboration are its greatest assets. There are a multitude of coffee shops designed for comfort, inviting employees to gather and trade ideas and carry out small meetings.

Designers placed random conference-sized tables for larger meetings; soft furniture benches and chairs are peppered throughout for open use. All workspaces – including boardrooms – are open to any group of employees for meetings. There are no prestigious corner offices on this campus, either, Trefts said. All of the window glass space is free of office space so everyone can enjoy the views.

Company history is on heavy display throughout the campus halls with museum-style exhibits of artifacts and other items that illustrate Exxon Mobil’s role in scientific achievement as well as contribution to American pop culture. There’s a bank of old filling station signs in one corridor, a lineup of historic gas pumps in another.

The company’s contribution to racing is featured with the actual championship NASCAR and Formula One racing cars adjacent to open meeting space.

But Exxon doesn’t shy away from its complex history, either. On prominent display is the ship’s bell from the Exxon Valdez, an oil tanker that struck a reef on March 24, 1989, and spilled 11 million gallons of crude oil into Alaska’s Prince William Sound. The ensuing environmental damage and cleanup forced the company to change the way it did things. And those changes transformed the industry. Important enough, Treft said, for the ExxonMobil board to want it recognized as a company milestone.

There’s also what employees call “The Patent Wall” a seven-story listing of every U.S. patent developed by ExxonMobil scientists and engineers since the company’s inception. Another wall on the opposite side of the building lists historic company milestones like the simple, “1974: Introduces Mobil 1 synthetic motor oil,” to the scientific, “1963: Invents three-dimensional seismic exploration.”

One can’t help but feel like you are part of something bigger than yourself while on the campus. All around, in whatever building you walk through, are reminders of the legacy the company has built through serving customers and pioneering fuel achievement.

With the thought and effort it put into this Houston campus, ExxonMobil is hoping that legacy of achievement continues long into the future.