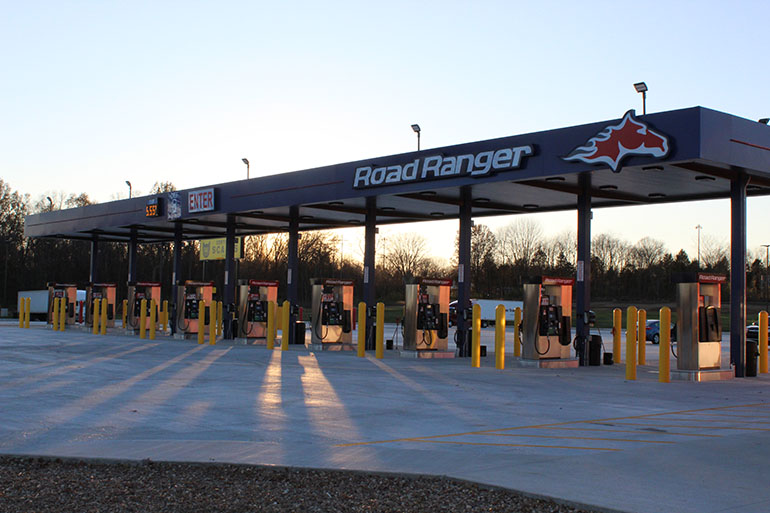 Road Ranger was started in 1984 with a single convenience store opened by founder Dan Arnold. In 1990, he sold the company to pursue a real estate career. But retail was his passion, and he reacquired the company in 1994, adding stores and travel stops over the next several years.

Road Ranger sold the convenience store segment to GPM Investments in 2015, while continuing to invest in its travel center segment across Illinois, Iowa, Indiana, Missouri, Texas and Wisconsin.

With 41 travel stops in six states, Road Ranger today stands as the fourth-largest travel center chain in the U.S. After Dan Arnold’s untimely death, the chain was purchased in 2018 by Enex, a subsidiary of Chilean investment company Quiñenco.

The new ownership had watched Road Ranger’s previous expansion throughout Texas and felt there was potential for it to continue. 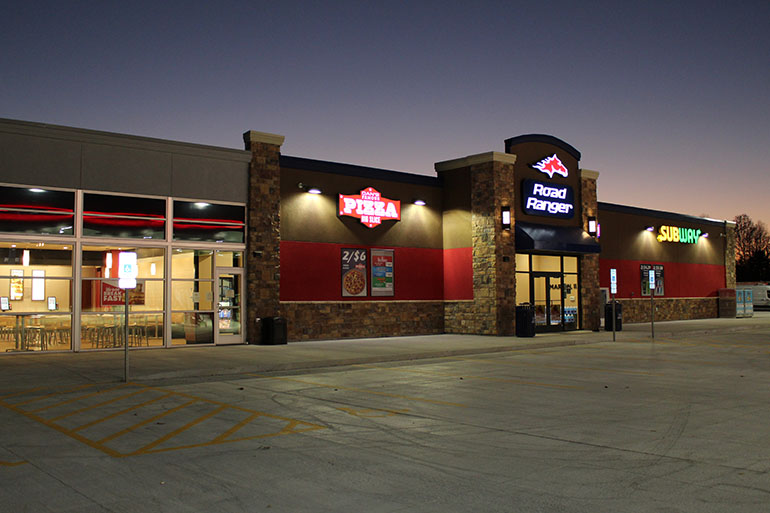 “They saw the progress and growth and what we were attempting to accomplish when we expanded into Texas, and they saw an opportunity to buy it and continue to grow it,” said Ryan Arnold, vice president of marketing for Road Ranger and a nephew of its founder. “We opened three stores this year during a pandemic.”

But more than that, the new ownership observed that Road Ranger seemed to have grown with dual personalities. Some consistency was in order, Arnold explained. New CEO Marko Zaro observed that the new-build Texas locations had a modern, updated feel at the expense of the older Midwest sites.

The answer was a newly constructed store in Marion, Ill. The chain introduced a new store design. It featured an exterior with brightly lit parking and fuel areas thanks to the latest in LED technology. Inside, the country, barn-wood feel displayed by most legacy locations was left behind in favor of a more modern environment designed to appeal to professional and auto drivers alike.

“So we stripped all the wallpaper off. We stripped all the old paper signs off inside,” explained Arnold. “We went with more neutral colors — a lot more white stuff, white tile; cleaner, wayfinding text for coffee, for cold beverages, for the restrooms — completely digital, so no paper signs in the store.”

Indeed, all menu boards, including for coffee and food, as well as for cigarettes, are now displayed on a 55-inch or larger digital monitor. 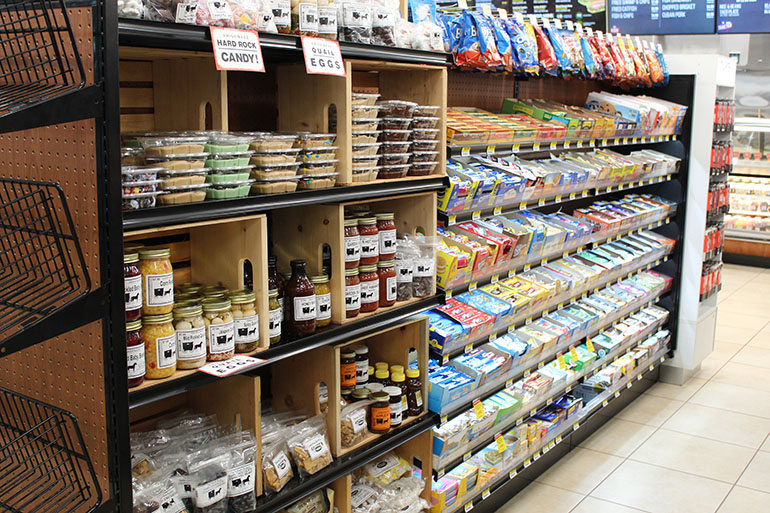 Not only were these upgrades cosmetic, but the digital pieces were designed to be functional, too. The new signage allows for remote menu and pricing changes via electronic device — very handy for someone like Arnold who’s often working from the field. It’s also important to the buying public.

“That central control was a big deal for us because, again, at first, you’re buying with your eyes,” Arnold said. “So, if we can’t get pricing correct and the menu doesn’t look appealing on a digital board, it’s not going to work.”

In addition to the Marion new-build in 2020, Road Ranger opened new-builds in New Boston, Texas, and Brinkley, Ark. These are the new standard that the company will use to measure future stores as well as the remodels of older sites across its entire footprint.

“We’re working on rebranding every store,” Arnold said. “Every year, we’re putting a capital expenditure budget together. Right now, we’ve been able to rebrand all of the gas canopies and the diesel canopies.”

The forecourt makeover was the first of a two-pronged plan. Arnold was hesitant to put a timetable on the interior rebranding plan, but it’s already in progress and moving forward. 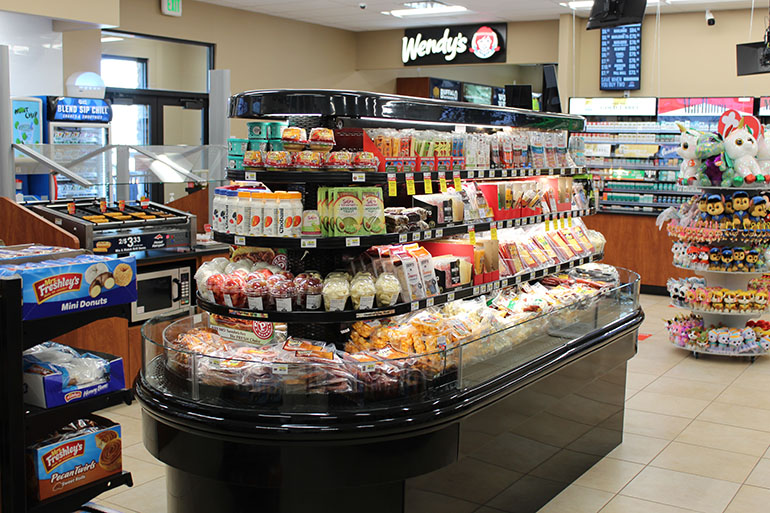 Foodservice on the Front Burner

Along with most outlets across the dining industry, the pandemic forced convenience stores to quickly adjust their offerings to conform with safety protocols and customer no-touch safety expectations. Food programs had to shut down much of their hot service menus like roller grill items and close dine-in areas.

Across the industry, so many convenience and travel outlets quickly met those challenges head on. Arnold is especially proud of the way Road Ranger’s staff responded.

“With COVID this year, my category managers did a phenomenal job of adapting to that change, where you couldn’t get a roller grill item. You couldn’t buy prepared food,” he said. So, Road Ranger’s people focused on portable, quality options. One answer was a charcuterie board meat-and-cheese tray item that could feed one or more customers.

Road Ranger has also been aggressive in expanding its proprietary food programs. Its pizza program, Dan’s Big Slice Pizza, features a 16-inch pie and is in 90% of locations. Ranger Kitchen, a hot deli bar concept, offers a full variety of items, from burgers and fries to shrimp and barbecue to wings.

To meet those ‘new normal’ expectations, they made items more grab-and-go friendly for ease of travel. Many containers are designed to fit into vehicle cup holders. 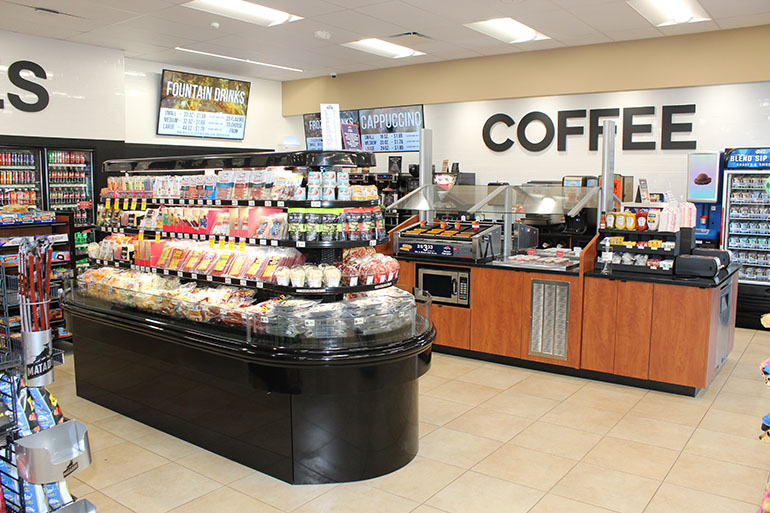 “We called it Tejas Taco, and when we did it, we just had it in Texas,” explained Arnold. “That’s why we came up with the name Tejas Taco.”

Road Ranger tested it out in a few stores, and the concept did very well. It’s now in all of Road Ranger’s Texas locations, its Arkansas location and three Illinois sites.

“It was really cool to see it evolve,” said Arnold. “The goal now is to go back and retrofit kitchens to expand the Tejas Taco program.”

In addition to its own proprietary food choices, Road Ranger also operates five name-brand quick-service restaurants (QSRs) for folks who like to stick to their familiar, go-to dining choices. Road Ranger currently owns and operates Subway, Church’s Chicken, Chester’s, Cinnabon and Dickey’s restaurants throughout its footprint. Subway tops that list with 23 outlets.

Road Ranger also recently brought in Wendy’s restaurants as tenants at its three new-build locations. Arnold said that Road Ranger is considering expanding that number, as owners of Wendy’s franchises at its sites.

Arnold actually drove to Wendy’s headquarters and spent a few days learning about the brand and even working in a restaurant. He was very impressed, he said, with everything he learned. “You don’t realize how much goes into what it is that they try to do or accomplish until you get behind the scenes,” he said. 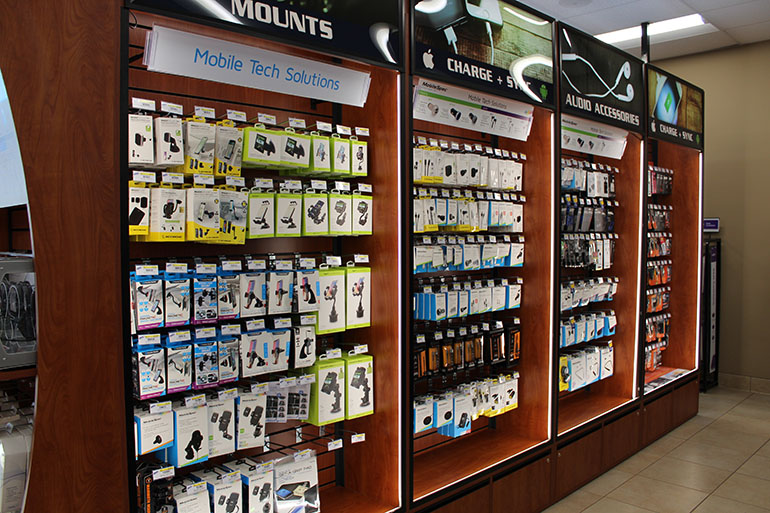 Road Ranger still has some ideas brewing for more food offerings in the QSR space, but Arnold prefers to keep those plans under wraps for the time being. Arnold can barely contain his enthusiasm when he speaks not only about the possibilities in foodservice, but also that management encourages him to take some chances while searching for new avenues.

Beyond food, Road Ranger is ready to improve the ways in which it connects with its customers digitally. Right now, the chain has what Arnold called a very basic rewards program, targeted mostly toward professional drivers. There’s also the Ranger Debit Card, which can save fuel consumers five cents per gallon and draws directly from the user’s bank account.

But while those tools already serve customers well, Road Ranger doesn’t feel they’re enough. Arnold’s top focus recently has been working with a team in developing a loyalty/rewards program and a complementary mobile app with features for both pro and family drivers.

“There’s doing it — and then there’s doing it the right way,” said Arnold. His team evaluated other programs, not only within the convenience and fueling industries, but also other outside industries, like hospitality, travel and QSRs.

“It’s been exhausting, to say the least,” he said. “But I can tell you that when it does launch at the end of March, we’re going to be really proud of it. And I think the consumers will end up loving it.”