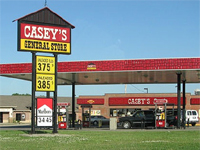 Three stores in Bloomington, Ill., plus one each in Pontiac, Dwight, Streator, Tremont and Heyworth, Ill., are among those that will be featuring the extended hours.

Most stores in the Ankeny, Iowa-based chain are currently open between 5 a.m. and 11 p.m. Stores expanding to 24 hours will add an average of eight employees per store. Casey’s owns 1,542 stores in 10 states, including 378 in Illinois and six in Bloomington-Normal.

“People get hungry all hours of the night and with this move, we will be able to better serve our customers,” Becky Vieira, manager of Casey’s at 3007 Gill St. in Bloomington told The Pantagraph. “I think this is a very positive sign which benefits our customers and benefits our store.”

Casey’s Chief Financial Officer Bill Walljasper noted studies have shown the stores changing to 24 hours have late-night traffic patterns that inspired the shift to longer hours.” Most of them are near factories or have areas where there would be a significant number of customers during the overnight hours,” Walljasper said. “We are very encouraged with the progress we have made in these areas and our managers and staff are excited about the new changes as well. We’re also glad we can provide some additional jobs in these areas, too.”