During the month of May, Jiffy Mart locations in Carroll County, Md. participated in a campaign to “Give Thanks. Give Hope.” for St. Jude Children’s Research Hospital. 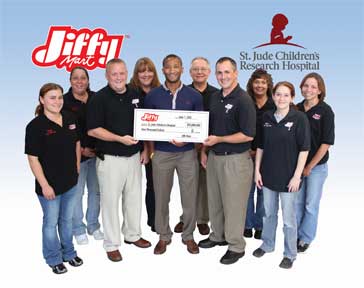 This is their fifth year participating, and since 2008, Jiffy Mart customers and associates have raised over $25,000 for St. Jude.

Customers were able to purchase a pin-up for one dollar, sign it and have it hung at the location where it was purchased. The goal at each store participating was to raise $1,250.  Each Jiffy Mart store proudly exceeded their fundraising goal, and Jiffy Mart’s corporate team and its employees contributed, collectively donating $9,000 directly to St. Jude Research Hospital.

The campaign ran in all four Jiffy Mart locations in Carroll County, Md. “The record-breaking campaign raised an average of $2,250 per location,” said Tom Moser, general manager.  He added, “The $9,000 total was an 87.5% increase over the 2011 total of $4,800, and our highest fundraising effort to date.”

As an added incentive, the associate helping to raise the most funds in each location received a Sam Koch signed jersey.  Jiffy Mart and the Baltimore Football Punter have teamed up together in 2012 and are next planning an event on July 9 to benefit Carroll County Food Sunday.

Because of generous donations such as these, no family at St. Jude’s ever pays for treatments not covered by insurance, and families without insurance are never asked to pay. Their mission is to find cures for children with cancer and other catastrophic diseases through research and treatment, and St. Jude has treated children from all 50 states and from around the world.

“We are proud to partner with St. Jude each year as well as the local organizations such as Shepherd’s Staff, Carroll County Food Sunday and the American Breast Cancer Foundation,” said Dwayne Cover, business manager. Jiffy Mart helped to raise over $12,000 for these organizations in 2011.  “We like to give back to the community, they take care of us so in turn, we like to help take care of them,” he added.

Jiffy Mart and its parent company, Tevis Oil, supports the well being of the community it serves and are well known for their philanthropy. Jiffy Mart operates convenience stores exclusively in Carroll County including Westminster, Finksburg and Hampstead, and provides Hometown Convenience to all of its valued customers.